The Osage Orange Tree by William Stafford is about the relationship between a boy and a girl named Evangeline. In this story, the two main elements such as plot and theme dominate this story. This story had an interesting plot and ended in an unexpected but fascinating way. William Stafford described the scenery in such a way that we felt like we are in the story. The two met during the boy’s paper route and had a conversation. The boy was in need of another customer so Evangeline took a paper home to ask her parents to buy it – or at least the boy thought she did.

Don't use plagiarized sources. Get your custom essay on
“ Essay: The Osage Orange Tree ”
Get custom paper
NEW! smart matching with writer

As the story moves on, everything that happened seemed to fall in place. Since the story was told from the boy’s point of view, we can read his feelings and understand his life in a better way. The Osage Orange Tree is a very well organized story where the details fall into place and create an interesting ending.

It all started from the first day of school when the boy stood alone by the flagpole and watched the other people talk amongst themselves happily. Then he spotted a girl, alone, wearing a faded blue dress and holding a sack lunch. During his paper route, he and Evangeline ran across one another and talked amongst each other. In need of another customer, the boy gave Evangeline one to take home and ask her parents to buy it. The next day of school Evangeline told the boy that his parents said yes.

From then on, the paper was delivered under an Osage orange tree in front of Evangeline’s house. This went on until graduation, when Evangeline did not show up for the graduation ceremony.

The boy asked Evangeline’s brother, the school janitor, where Evangeline was. Evangeline’s brother told the boy that Evangeline had stolen from her own bank account. He went to visit Evangeline’s house after his paper route when a woman stepped out and told him to get away. As he walked across a bridge, he threw a paper under the bridge and as he looked for where the paper landed, he saw a box of newspapers. He now understood what had happened – Evangeline had taken money out of her bank account to buy papers from the boy, without her parents even knowing about it. The author organized this story in a way that every clue comes together in the end to come out with an interesting ending.

There are really only two main characters, the boy and Evangeline. Both live in poverty, especially Evangeline. Evangeline lived in a sagging barn and wore the same clothes everyday. She was often teased in school because of her poorness in clothes and other things. Her brother is a middle-aged man who worked as the school janitor. The boy was a little better off. He tries to blend into the crowds of boys but is not talkative and is very shy. He lives in a town or community that lives off of wheat and burns wheat for fuel.

There are several settings in this story; the school, the Osage orange tree, Evangeline’s barn, the graduation ceremony, and the bridge. Each setting had a specific thing that happens in them. In the school, the characters are announced. Under the Osage orange tree the two meet and the boy gives Evangeline the newspaper. Outside of Evangeline’s barn, the woman chases the boy away. The graduation ceremony is where the graduation is held place and the boy cannot find Evangeline. And the bridge is where the climatic part is held place, when the boy finds the stack of newspapers.

The theme of the story is poverty destroys ones spirits. The newspaper that Evangeline buys is probably a money burden to her family. They already live in a sagging barn that looks like it might just fall over. She still buys that newspaper as if she were trying to be in his social class. She thought that maybe buying the newspaper would make him think that she’s worth being his friend. Poverty destroys ones spirit because it makes the reader feel that one might not feel very confident about herself and also toward others.

The author includes good detail into the scenery that makes us feel like we are in the story. The author also includes details on the people, too. Here is an example; “She was of medium height, and slim. Her face was pale, her forehead high, her eyes blue. Her tranquil face… (pg. 107)” After reading this, one can picture Evangeline’s face and have a good idea of how she looks.

The Osage Orange Tree by William Stafford is a well-organized story with parts of the story accumulating into an interesting ending. Since the point of view is from the boy’s side, we can understand how he feels and feel the way he would really feel. The author put details and symbolisms in the scenery and people to give the readers a better picture in their heads. The theme of this story tells the reader that one’s poverty can ruin confidence within the person. This story was a joy to read because of its organization imagery, and how everything came together and created a great ending. 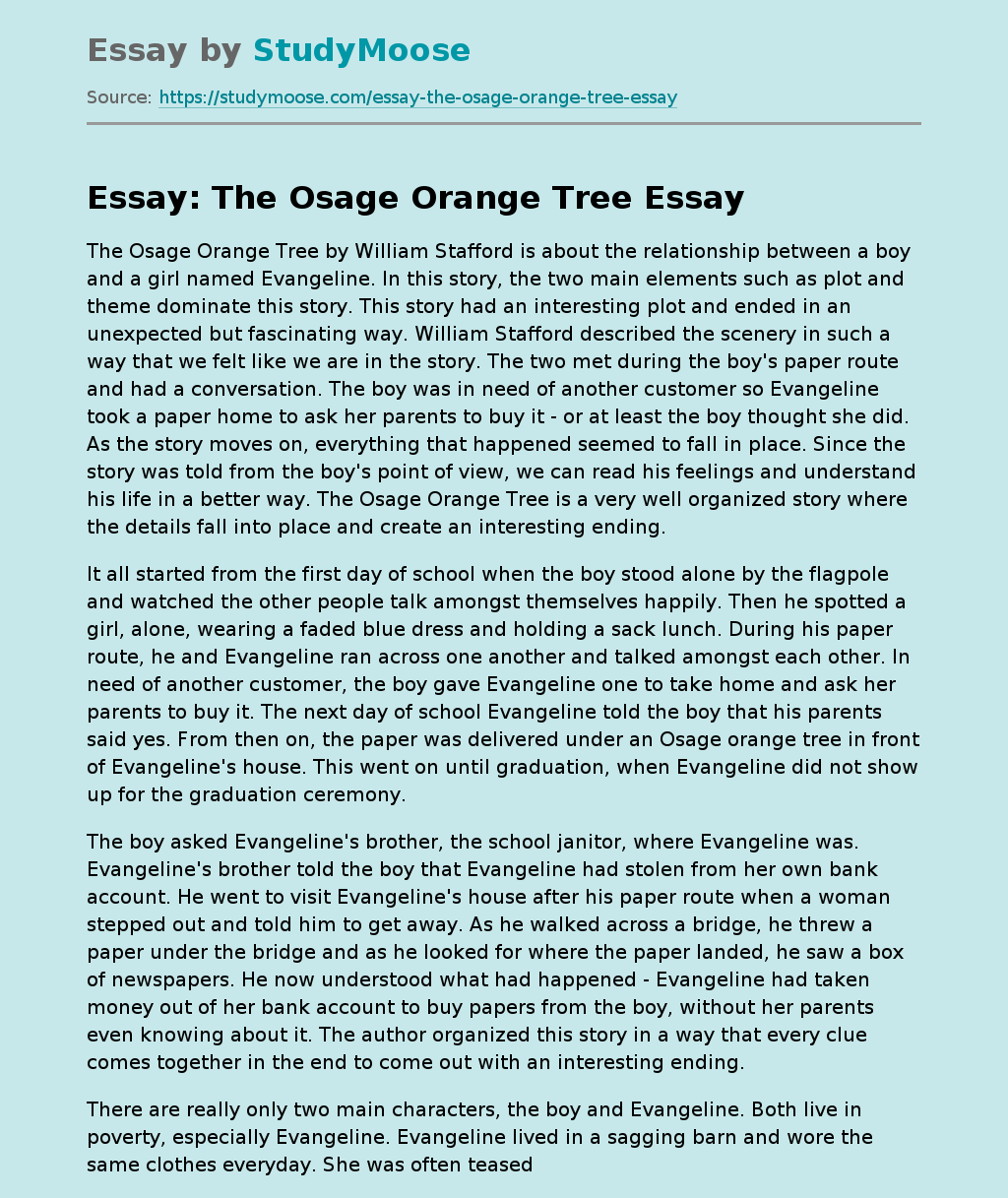