“I’ve always believed in numbers. In the equations and logics that lead to reason; but after a lifetime of such pursuits I ask, what truly is logic? Who decides reason? My quest has take me through the physical, the metaphysical, the delusional and back, and I have made the most important discovery of my career… the most important discovery of my life. It is only in the mysterious equations of love that any logical reasons can be found.”

This is a quote from John Nash’s fictional Nobel Prize speech.

Don't use plagiarized sources.
Get Your Custom Essay on Analysis of John Nash’s nobel prize speech Just from $13,9/Page

In actual fact, he was never asked to speak upon his acceptance of the prize. Regardless, this combination of words still speaks a powerful message, one that contradicts western society’s modern beliefs that love is irrational. He states that the only logical reasons lie within a feeling, an emotion that we have termed ‘love’. Nash was a man who lived his life based on “verifiable, empirical data”. He believed in something only when he could explain why.

So why then would a mathematician of such high status ever state something that so blatantly went against his system of belief?

I believe that this statement came as a result Nash’s ordeal with schizophrenia. Because of his mental disease Nash was forced to look at life in a more idealistic way. His trust in substantial proof was challenged because his senses had betrayed him. His mind was no longer trustworthy. He saw and talked and interacted with people that did not exist, people that only he could see. Everything he believed in was based on his ability to prove its truth. When his judgement turned out to be flawed he needed to discover another way to find the truth, a way that could differentiate his delusions from reality; a new form of logic.

Logic is defined as the science or method of reasoning. Most reasoning is dependent on visible, inarguable fact. However, John’s new logic depended largely on the effects of something. He knew that his delusions had no interaction with the physical world. The little girl as she ran through the pigeons could not scatter them no matter how much she shouted and “the prodigal roommate” could not open doors on his own. In observation of this his decisions about whether something was real or not depended on the effect it had on reality.

John Nash goes on to say that his wife’s love is the only reason he stood on a stage in Switzerland accepting the Nobel Prize. That she was the only reason he was alive; solely because of her love and devotion, her faith in his ability to overcome and her belief that something extraordinary was possible. The astonishing effect that love had on his mental health was in fact his “verifiable, empirical data”. No other person had ever before lived normally with schizophrenia, yet Nash was able to overcome his delusion and continue his work exclusively because of the support his wife’s love provided.

When John Nash asked his future wife whether or not their love warranted a long-term commitment she asked him, “How big is the universe?” He replied, “Infinite.” She retorted, “How do you know?” and he replied, “I know because all the data indicates it’s infinite.” She continued, “But it hasn’t been proven yet.”

“No.” he said. She continued to question, “You haven’t seen it?”

“I don’t, I just believe it,” he responded. She finished, “It’s the same with love I guess.” She had challenged him to think outside simple definitions of reality and to trust in what he knew in his heart to be right instead of what could be proven by an algorithm. So there must be some truth to his statement. There may be no physical presence of love but it can be compared to the wind. You cannot see it but its effects can be felt and can be seen in the most incredible works. 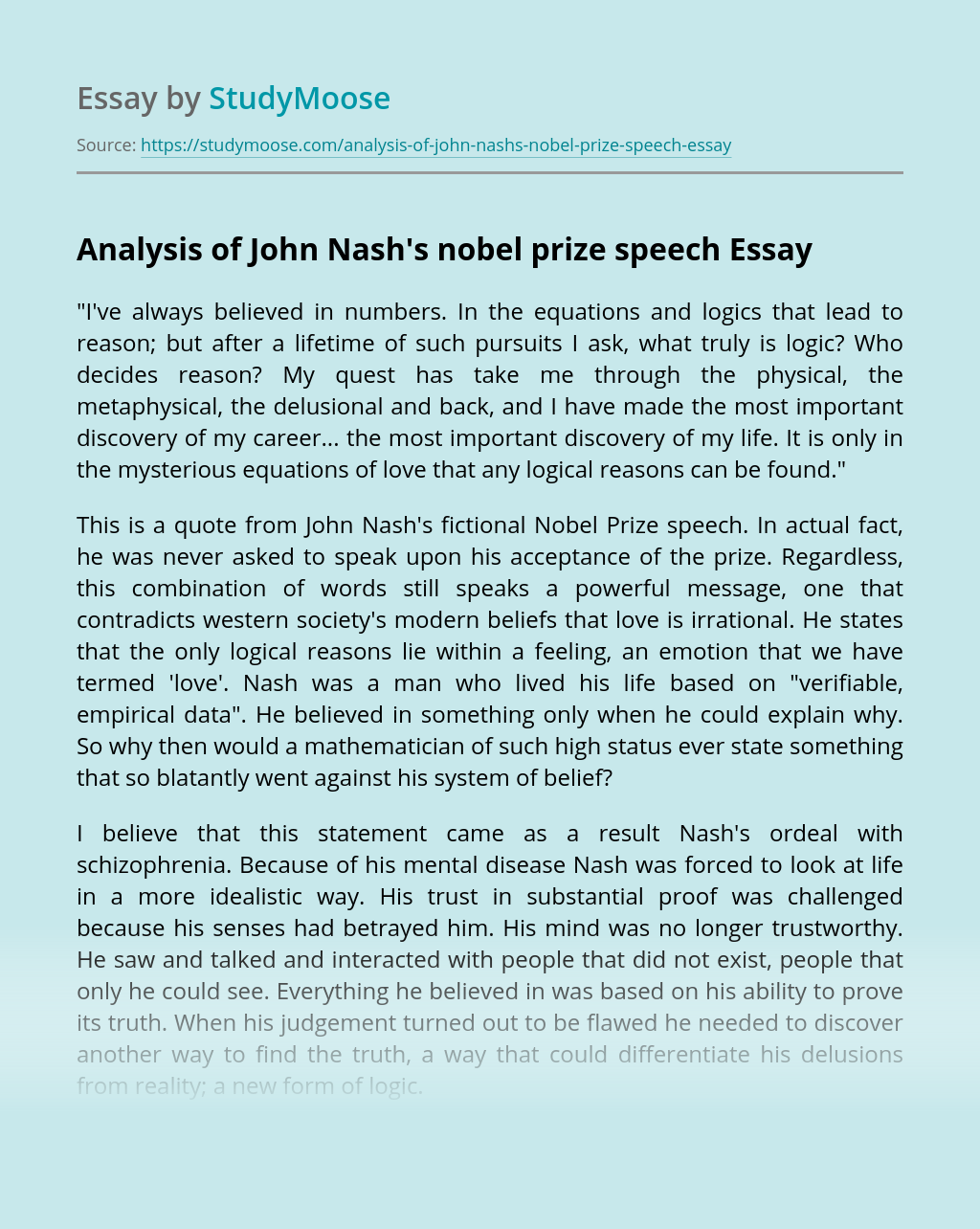