Analysis for "Two truths are told... but what is not" speech

Macbeth’s speech (Act 1, scene 3, lines 128-142) is very important to the play’s plot. This is because of three reasons. Firstly, the first truth is told from the witches’ prophecies. Secondly, this extract shows Macbeth’s reaction to the first prophecy coming true in his thoughts. Lastly, his speech shows the start of Macbeth’s vaulting ambition.

The three witches revealed to Macbeth that he will soon become the Thane of Cawdor, and later onwards, the King. You see the plot slowly advancing when Macbeth is pronounced Thane of Cawdor by Ross and Angus, Kind Duncan’s messengers, (“happy prologues to the swelling act of the imperial theme” Act 1, Scene 3, lines 129-130) Thus, with the first prophecy coming true, Macbeth’s trust for the witches becomes slightly stronger as he starts to believe that “If chance will have me king, why chance may crown me”.

Macbeth’s speech shows his confusion and fear of what him becoming King could mean.

Macbeth was confused between good and evil, for example ” If ill, why hath it given me earnest of success”. Here Macbeth is wondering, if this supernatural persuasion is wrong, then why has it given me the honour of becoming Thane of Cawdor. Another example, ” If good, why do I yield to that suggestion whose horrid image doth unfix my hair, and make my seated heart knock at my ribs”. Here, Macbeth is questioning, if this is right, then why am I so afraid.

Macbeth is also afraid of what him soon to be becoming a King would mean to the present King, Duncan.

If Macbeth were to be King, that would mean that both Duncan and his son Malcolm would have to die or be executed. Macbeth wasn’t as much thinking about what might happen to Duncan but rather, what Macbeth would do to him… murder.

This extract of the play reveals the start of Macbeth’s vaulting ambition. Macbeth’s ambition to kill Duncan and Malcolm and finally become King rises with every new scene. It shows that there is conflict between Macbeth’s ambition and his conscience. For example, in lines 139-141, its states “my thought, whose murder yet is but fantastical shakes so my single state of man that function is smothered in surmise”. There he is firstly saying that the idea of murdering Duncan is fantastic, but then his conscience kicks in and tells him that he is too scared of doing so. However, his ambition steps forward and finishes Macbeth’s speech with “nothing is but what is not”.

Hence, this extract is very important to the rest of the play because the first of the two prophecies become true and thus this unfolds the plot, you are told of Macbeth’s reaction to this coming true and finally, the ambitious Macbeth begins.

Analysis for “Two truths are told… but what is not” speech. (2016, Jul 01). Retrieved from https://studymoose.com/analysis-for-two-truths-are-told-but-what-is-not-speech-essay 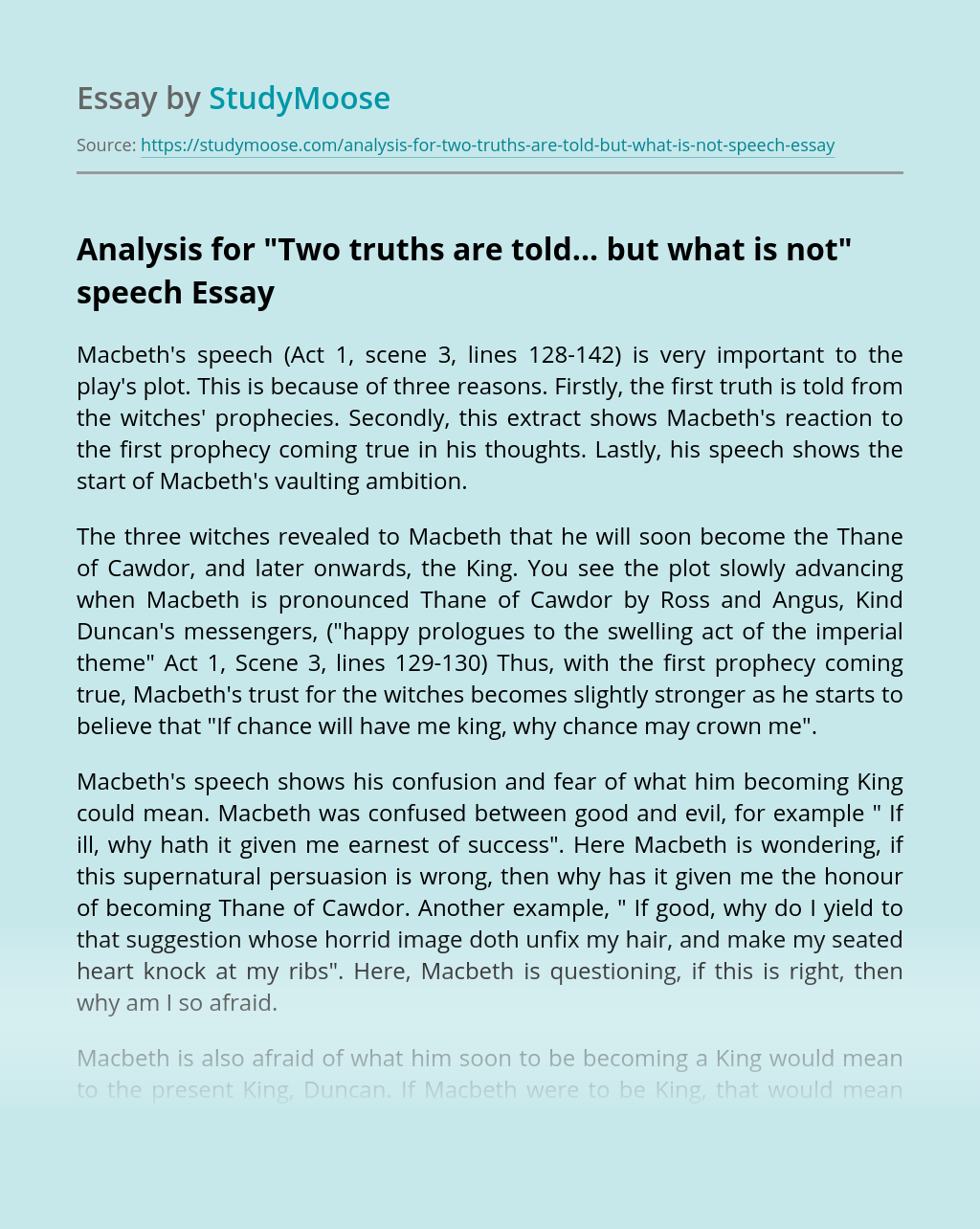 Fair Is Foul and Foul Is Fair

“Fair is foul, and foul is fair. Hover through the fog and filthy air,” said the witches in the first act and scene of Macbeth. Pertaining to the story, I believe this quote sheds light to the audience on the evil the witches possess. Without even reading further into the book, the audience can feel...

Both Shakespeare and Orwell present rivals as threats to their leaders’ power. Shakespeare introduces this threat through the Witches in Act 1, scene 3 when the third witch announces that Banquo ‘shall get kings’. In Macbeth’s soliloquy in Act 3, scene 2, the audience is reminded that he is predisposed with maintaining his power, now...

Get Essay
The Role of Masculinity in Macbeth

What makes a good man? A good king? These are not easy questions to answer. Macbeth presents us with two very different notions of manhood, and explores the relationship of masculinity to the role of a king. We are asked to consider whether the best way to govern is with a soft touch, like Duncan,...

I had actually typically heard of the ‘Macbeth Home” and of the brave soldier Macbeth, by whom many a male had fulfilled with his death. At first I had little understanding of Lady Macbeth, however subsequently as a result of our conference today, I have started among the most captivating cases having ever to be...

How does Shakespeare dramatise the murder of Duncan in Act II Scenes (i) and (ii)?

The murder of King Duncan in the play Macbeth is an important part of the play. It shows the point at which Lady Macbeth and Macbeth begin their downfall, which ultimately ends in their deaths at the end of the play. The first and second scenes in Act Two are important because they are immediately...

Where do the witches say they will meet macbeth? Upon the heath-uncultivated plains How do the witches speak? In rhyme,each witch has something to say three times,paradox Paradox statement that seems to contradict itself or to be impossible, but is actually true What is the meaning of “Fair is Foul,Foul is Fair” (witches)(paradox) What is...

Characters in Relation to a Bee Hive

In Sue Monk Kidd’s novel The Secret Life of Bees, the female community and the roles in a colony of honeybees go hand in hand in completing the underlying theme that assists the plot’s development. The characters throughout the novel present many parallels to the novel’s main symbol: bees. The aspects of a colony and...