The kingdom of Saudi Arabia is sovereign gulf state constituting of monarchy rule, Al Saud being the ruling family. Basic law of governance in the country is Sharia (Islamic Law) and 1992 Basic Law. It puts Quran (Muslims’ Holy Book) and Sunna (Prophet Muhammad’s sayings and traditions) to the status of constitution. Therefore, religious institution has a great role to play in governance of public’s many aspects of daily life. The government is regarded to uphold and implement the sex segregation overall.

Don't use plagiarized sources. Get your custom essay on
“ Women Rights in Saudi Arabia ”
Get custom paper
NEW! smart matching with writer

Although the basic law does not promote discrimination but clearly male domination is practiced and women are halted in important public life. There is special police directed for the segregation but it goes against the article 8 of Law of Governance, “The system of governance in the kingdom of Saudi Arabia is based on justice, consultation and equality according to the Islamic Sharia (the law of Islam)’’ (Leiden & Brill, 1999). Women’s issues were first recognized when the rapid economic development occurred in 1970’s, social change started to up rise and the issues could not be overlooked.

Eventually it has increased in this era where women are more aware of their rights and have social media platforms to raise their voices.

Saudi Arabia’s past socio economic and political conditions play an important aspect in understanding female’s role in the society. Women have been excluded from many public life events from decades, which is one of the great problems faced by the country. The appropriate factors constituting for this are the Law, traditional culture of Arabians and different schools of Sunni Islam.

But the social, political and economic change started in 1970’s when oil was discovered and the income improved the lifestyles of citizens like education abroad etc. Migrants from foreign lands for labor of oil companies constituted to almost 43 percent. The Americans brought their western facilities to the country raising the lifestyle preferences for locals, (New York, New York Press, 1996). Foreign women had no veils, shopped freely and were actively participating in public life, which raised awareness for Saudi women and they started asking for similar rights as well. The Mecca uprisings in 1979 halted the few discussions on this topic. The dilemma was that they had to maintain the balance between the advance social changes and their social traditions and Islamic identity as well, especially regarding to women. Oil production era also reduced women employment opportunities and isolated them more. This is represented in the following figure through the Dutch Diesel Model.

Two key points for which women rights are limited are:

It is often linked to religion, but basically it is not religion it is the Saudi culture mostly. This also backs a Saudi saying, ‘’ It’s the culture, not the religion’’. Women have been previously seen pressed by the name of Islam. But now women are using the Islamic context to fight for their laws. As Islam gives many rights to women and does not back oppression of women at all.

Speaking of guardianship, women are not allowed to do following things without the permission/ presence of their Wali( Guardian), which is supposed to be a Mahram( Male relations a women cannot marry in Islam):

The law for employment permission by guardian was annulled in 2008, (Zoepf & Katherine,2010)

A new application was established in 2012 and a policy was made that the guardian will receive a notification text whenever a woman under his guardianship will leave the country. The app is known to be Absher App, (Mahony, Telegraph, 2012). The app received much disliking in 2019 and was asked to be removed by public. People regarded it as modern tools used for backward approach. There were many fatal incidences where women suffered because their guardians were not present which built up more rage towards this rule. In 2016, the first petition to end the guardian rule was signed by almost 14500 Saudi people, which was delivered to the court by a famous women activist Aziza Al-Yousef ,( Ensor,Telegraph,2016).

Saudi Arabia was the only country to not allow women to drive until 2018. In September 2017, King Salman granted the right for women to have a driving license. The decision was backed up by majority of senior scholars in council. This was a great step for the Saudis towards equality for men and women. It was kind of liberation for dependant women (Kennedy, NPR, 2017).

Saudi Arabia has come a long way from being a very conservative state to an elected state in U.N Commission on the Status of Women. Although this decision was criticized by many, the country has made significant changes to alleviate the status and rights of women. As in the start of 21st century, women did not even have their identity cards, but now they can drive and can even travel without guardians permission as of in 2019. The social change throughout the world has reached Saudi Arabia late but eventually it has changed the traditional social culture associated with Arabian Peninsula especially related to women. Women have more platforms to raise their voices and have realized religion has nothing to do with their exclusion from public life. Since 2017, women in Saudi Arabia are also allowed to gain government facilities of health care and education without seeking the permission from their guardians. Although the Kingdom has facilitated women significantly comparatively, still according to the world human rights standards Saudi need to show more flexibility. Women rights groups are gathering to raise voice for ending the guardian rule. Social media platforms are bases for these movements, initiating with hash tags and trends. Moreover, the female inclusion in the employment force will gain favorable outcomes not only economically but also socially. 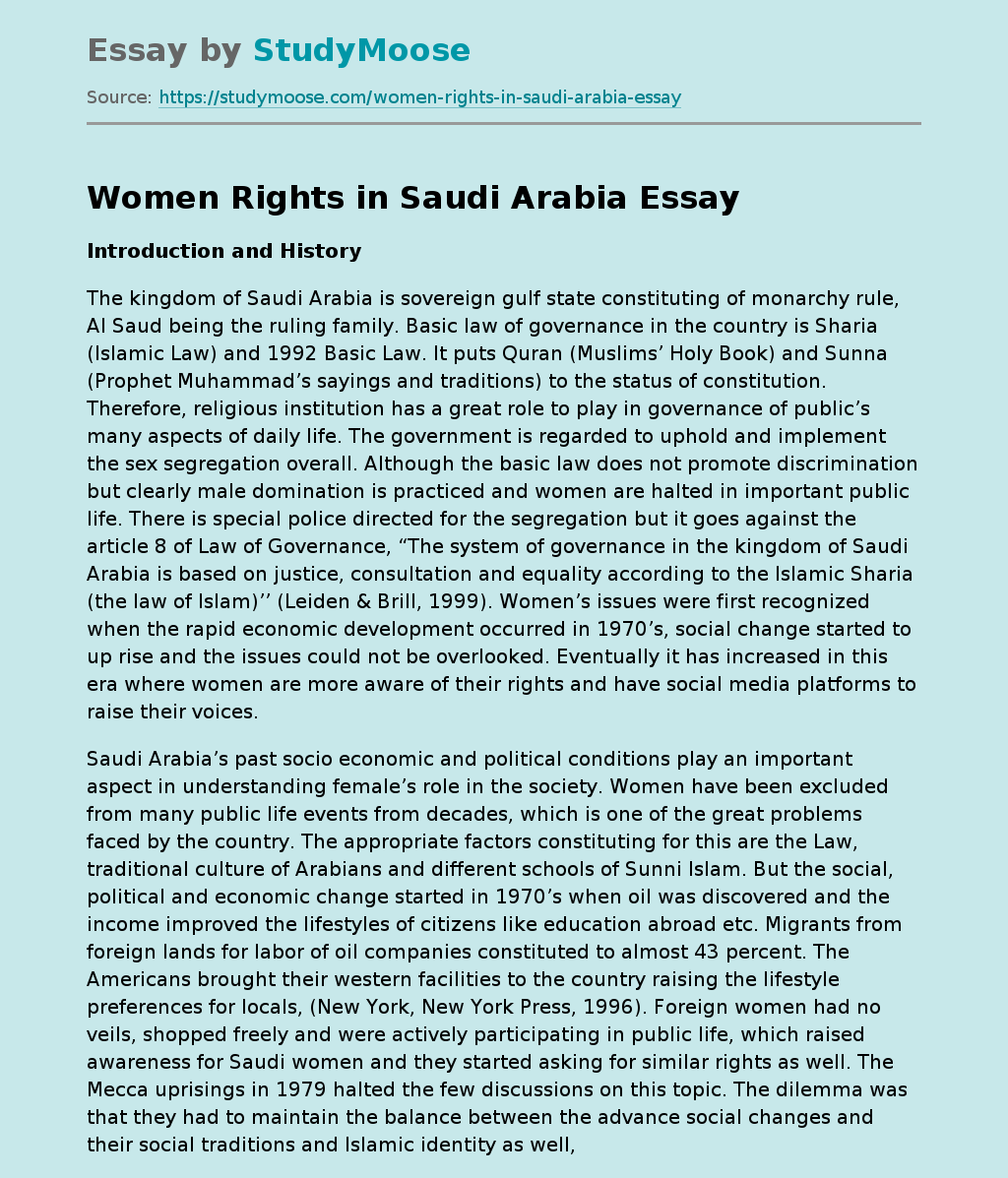