Proposal for Solving Issues Regarding to Gyms In Saudi Arabia

As a result of the survey that has been conducted to analyze responders’ observations regarding to fitness centers. A problem of high cost memberships and maldistribution of gyms have been proved. In order to solve these issues, we suggested to apply fixed memberships’ fees and place gyms in neglected districts. The recommended changes will improve citizens’ life-style, along with meeting the healthy aspects of Saudi vision of 2030.

We as humans have different perspectives in accordance to the meaning of healthy lifestyle.

Don't use plagiarized sources. Get your custom essay on
“ Proposal for Solving Issues Regarding to Gyms In Saudi Arabia ”
Get custom paper
NEW! smart matching with writer

Some of us consider being on a food diet to be fit is enough which is not, working out and exercising is an essential step you take within the food diet so you can obtain a well health. Since obesity has increased in Saudi Arabia we must eliminate the issues that happens behind the walls of fitness centers.

The main purpose of writing this proposal is to introduce an occurring issue regarding to gyms due to their highly expensive memberships.

Moreover, most owners of fitness centers targeting same districts where other districts are neglected.

According to memberships’ fees, we propose applying a fixed prices for subscription in all fitness centers or place a standard offer which is called “pay as you go” membership. In addition to the maldistribution of gyms, we suggest to provide them in neglected districts by applying the friendly and cheapest way which is using old buildings or renovate old ones to be appropriate for gyms in order to save money and don’t waste it in construction materials, labors, and equipment.

Based on the Saudi vision of 2030 “living healthy, being healthy”. We intend to encourage citizens and residences to engage a healthy and balanced lifestyle where they would be excel in physical activities.

Obesity has been existed for such a long time as stated by many articles. Arab news (2016) announced that Kingdom of Saudi Arabia ranked the 3 rd country having a high percentage of world obesity. Also, referring to Sabq online newspaper (2018), Riyadh obesity club recorded 40% of fatness in population. Nowadays, the only concern of gyms or fitness centers is to raise their profits. Gyms in Saudi Arabia focus on increasing the cost of memberships in order to reach their financial aims. One of their ways is by taking advantage of women’s nature in spending money, because women pay whatever the price is due to their obsession of being fit. While in men’s gyms, some couches play tricks on users for not informing them of specific classes where they force them charges after the training sessions.

The data sources used to create this proposal are journal articles which showed that the issues are somehow global, and a local questionnaire has been answered by different demographics of people.

To attempt our aim of this proposal, we would like the solutions to be applied as soon as possible in order to provide spaces where people can practice activities that benefit their health-life. In addition, cost of renovation buildings in neglected districts as a solution of maldistribution of fitness centers has been determined.

These pie graphs below show the percentages of each question that has been asked to responders which are related to: the time traveling, most problem facing gyms users, and the period of your gym’s membership: As a result of this survey, we gathered the solutions of responders that match ours. The report shows that there is a huge difference between women and men memberships’ fee which made the users seek equality for applying cheap fees for both men and women gyms. Also, responders mentioned a suggestion for a long traveling distance duo to the neglection of their districts for not having gyms which is open other branches in neglected districts.

According to the article published on Healthline (2018), research shows that money won’t motivate you to exercise which means people who pay for an expensive annual gym membership end up not getting to work out, because they rely more on the external motivation than the internal one.

People who got questioned regarding the article suggested an instant solution instead of wasting lots of money on gym memberships which is there are a variety of online workout sources and apps which are as effective as those at the gym, and even more cheaper and won’t cost you a lot! The article mentioned many free apps and cheap ways in order to maintain your fitness including the Nike training club which considered to be a favorite app for many online workouts’ users due to its free-cost, great resource for workout routines, and its availability on both mobile operating systems which are IOS and Android.

Carlo Dellaverson (2008) has reported on CNBC website about the true cost behind gym memberships and he quoted that “Paying for a gym or health club membership these days can take more weight off your wallet than it does off your waist.” Which means all gym memberships are expensive and they cause waste to our money because we don’t go to the gyms every day. Carlo suggested that buying a new equipment to use in your house might cost the same as annual memberships which saves money for lifetime. Moreover, he mentioned another less expensive solution which is attending clubs that offer pay-as-you-go memberships or short- term passes and this solution consider fair to pay for.

In case of approving the solution of renovating old building in neglected districts to place gyms, here is a scheduling that indicates the amount of work need to be done and the cost of overall equipment’s:

Description Number of units and Price:

In case if there is no action taken towards the problem, the percentage of overweight and obesity will increased in Saudi Arabia and our citizens health and life will be threatened. This proposal provides the solutions that would eliminate the negative effects of this issue. Implementing a standard price of memberships and right distribution of gyms have a strong impact on improving the health of our society.

Proposal for Solving Issues Regarding to Gyms In Saudi Arabia. (2021, Feb 02). Retrieved from https://studymoose.com/proposal-for-solving-issues-regarding-to-gyms-in-saudi-arabia-essay 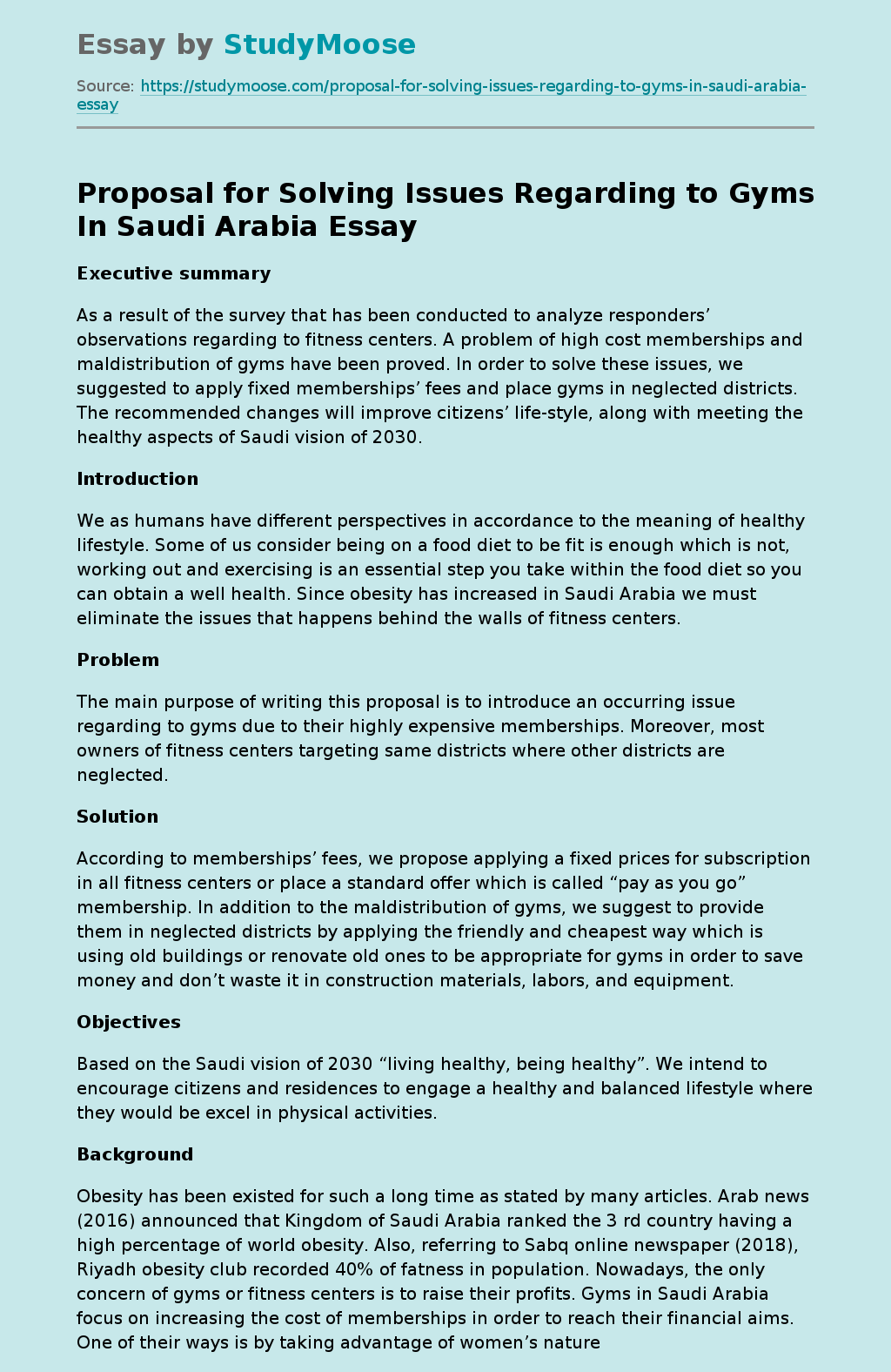