Why were the police unable to catch jack the ripper?

It is probable that in modern-day society Jack The Ripper may have been caught. There are many possible reasons why Victorian police were unable to catch the notorious Ripper. The Ripper is thought to have been very clever in the way he operated and manipulated both the main police forces in London at the time, who were both in competition to catch him.

Jack cleverness, in my opinion is one of the reasons that he was never caught. There are many clever criminal in our day and age that are still at large and it is their skills which keep them covered.

Don't use plagiarized sources. Get your custom essay on
“ Why were the police unable to catch jack the ripper? ”
Get custom paper
NEW! smart matching with writer

Jack the Ripper was very careful with what he did and left no clues for the police to work with. None of the descriptions of the killer given by witnesses ever matched. Although the ripper’s modus operandi was very similar he always struck at random and there was no established connection between himself and his victims. Being the first British serial killer, the Metropolitan police force or Criminal Intelligence Unit had no experience in dealing with serial killers or any other type of murderer.

Proficient in: Jack The Ripper

Jack was also far too sly and quick for them to catch. He would hardly ever leave any clues and even if he did, they seemed to be useless or led police officer to dead ends. Even when the police where near to catching him, Jack would always manage to flee into the dark streets of Whitechapel.

The press played a part in why they were unable to catch the Ripper as they sent hoax letters to the police. These letters would help sell newspapers but also waste time. Time was wasted checking out the authenticity of the letters and chasing up false leads that the letter pointed to. While the police were checking these letters the time that it took up could have been used more appropriately chasing up leads they had found themselves. Public citizens also wasted time with the hoax letters. This meant that there were fewer officers for other jobs in the case, which meant less time for focusing on genuine leads.

Another reason Jack the Ripper was never caught was the lack of forensic evidence. In our modern world fingerprinting, blood sampling, swobs and D.N.A play a big part in bringing criminals to justice. The idea of fingerprinting didn’t come around till the latest decade of the nineteenth century and wasn’t used until the begging in of the twentieth century. This made it impossible for fingerprinting to be used at the scene of the murder. D.N.A sampling was also absent. D.N.A is relatively new in even our modern day society.

If D.N.A was present it could have helped to find the Ripper as it is very affective in finding criminals today. In my opinion forensics and D.N.A play a big part in why Jack the Ripper was never caught. The lack of technology in Victorian times meant a lot of criminals wouldn’t have been brought to justice. Although I cannot possibly say that D.N.A would have definitely have brought the killer to justice, I can safely say I believe it certainly could have if it was present in that era. The canny ways they used back then also wasted time. Whereas we use forensics they believed that the victims eyes would hold the image of the killer.

For a serial killer, Jack the Ripper stayed very calm throughout his reign of terror. He stayed calm under pressure and was able to kill his victims right under the noses of the East-End citizens and the increased police patrolling Whitechapel. Although his killings attracted a lot of attention, while he carried out his devilish acts he never drew attention to what he was doing and this prevented him from being caught.

The killer was a very clever and sly person. His strategic killing and navigation of London boundaries meant he strung along both the competing police forces. When in uniform, forces had boundaries which any of the other force was not allowed to cross. The Ripper played this to his advantage killing in both districts. This meant he could easily kill in one and flee to the other for another kill without being followed for his previous murder.

The handling of major evidence was also a downfall in the case. The acts of Sir Charles Warren show how the police did not have any expertise in handling evidence. Warren ordered his men to rub of the message stating, ‘The Juwes Are The Men That Will Not Be Blamed For Nothing’. He believed it would cause local Jews to be targeted. Below this message lay a blood soaked piece of apron which was used as evidence. If both of these messages were combined by the killer then by destroying one you are destroying another useful lead.

Another reason for why the killer was never killed can be associated with this message. It was widely believed that the killings had a Masonic connection. Warren was also a mason and was said to have destroyed the evidence as he new the incorrect spelling of Juwes (Jews) was associated with his beliefs. If the police authorities believed that this Masonic connection was an accurate theory and the chief commissioner himself was a mason, then maybe a cover-up could have meant jack would never be caught.

The police did not know the significance of the clues found. Many clues were mistreated or even lost. They were unclear as to how they must treat all clues however little or big actually are.

As mentioned, the police’s lack of knowledge in tracking a serial killer was a big problem. it had never been attempted before, they had no idea of where to start and what the best way of tracking him actually was. They didn’t have training in what method to use and this meant they were unsuccessful in the methods they used.

Clashes of opinions also tainted the cases success. Doctors disagreed on whether the Ripper had knowledge of surgical procedure. Most doctors believed the Ripper had simple training even if it was just training a butcher would receive. They believed that he killed in clean cut way and in a precise manner. He knew exactly where parts of the body where, and how to get to it. This confused police and things like this wasted a lot of time. Again this caused more false leads as police questioned every butcher in Whitechapel. This was time and money consuming.

The Modus Operandi was a main feature in why the ripper never got caught. It is ironic that his Modus Operandi could help him not get caught as it is the one remaining factor which repeats. A repeating pattern would lead you to assume it would be easier to follow the pattern and deter the killer.The killer carried out all the killings during the night, making him less visible. He was very quick and quiet, and managed to gain a trust with his victims before killing them. He was also quick at killing his victims, leaving little or no time for the police to even come close to catching him.

The police force was initially created for the prevention of crime and not the solving of crime. This meant they had no expertise in solving murders The police had no idea how to solve crime as their expertise lay in the prevention. Prevention was there strongest point and they didn’t know how to work in any other manner. The first thing that the Metropolitan police did when the serial killing started was increase police on the street. We can see this had no affect as not one police officer ever saw the ripper or came close to catching him.

Jack the Ripper was never caught because the police were still very naive, inexperienced and did not have the modern day methods that we use to track down killer in the twenty-first century. Jack the Ripper left very little evidence and no major leads. This gave the police nothing to follow up but hoaxes which they hoped were genuine. Time was wasted chasing up fake letters that were made by the general Whitechapel. The killer was think logically and it was his skills, quickness and quietness in killing which helped him remain untraceable. He played a game with both police forces logically pitting them against each other. The fact that both police forces kept key evidence from each other and decided to compete instead of join forces meant that their searches were useless.

In my opinion all of these reason added to the reasons why the infamous Jack the Ripper was never caught or brought to justice.

Why were the police unable to catch jack the ripper?. (2017, Sep 26). Retrieved from http://studymoose.com/why-were-the-police-unable-to-catch-jack-the-ripper-essay 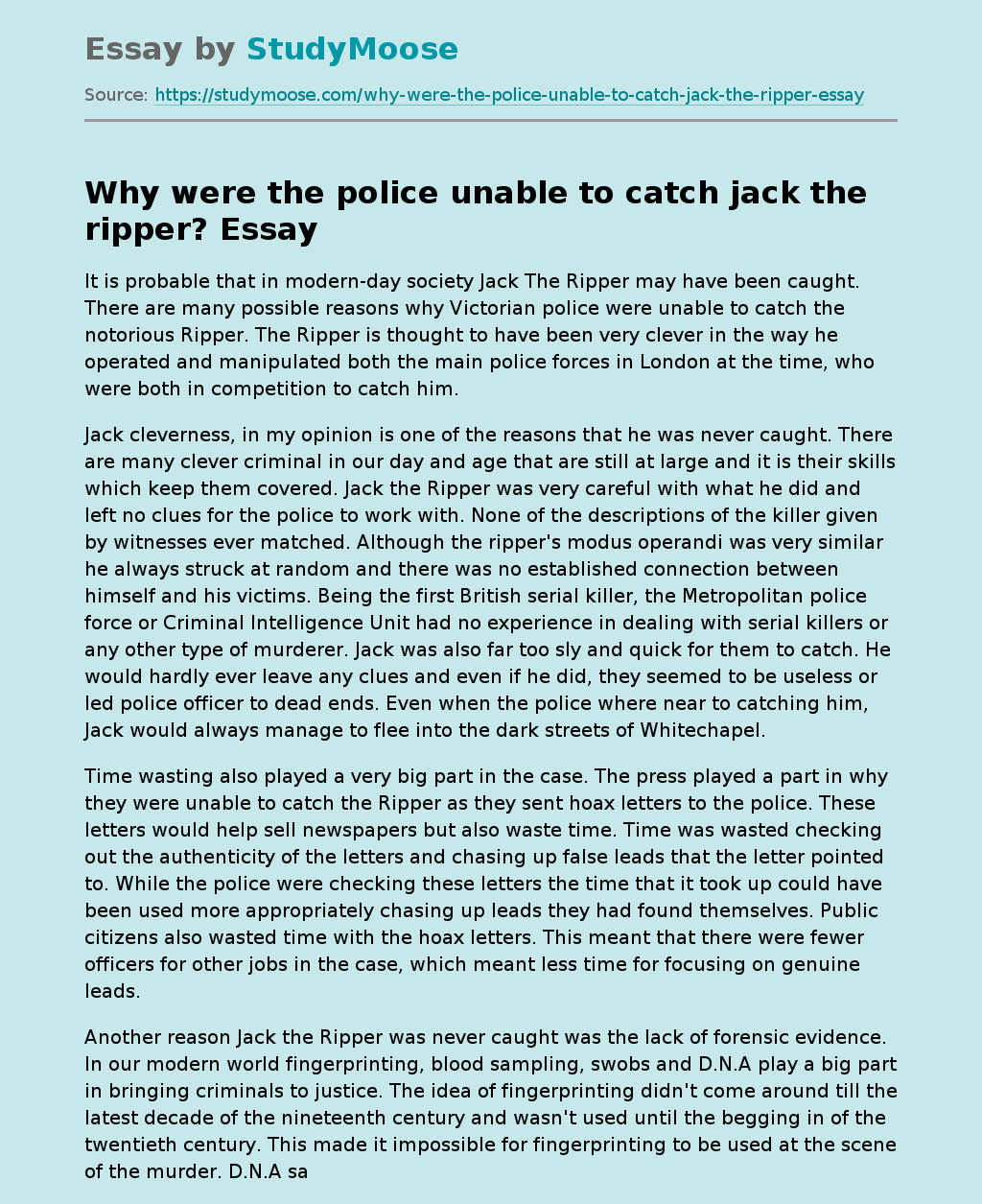