Compare and Contrast: Judith Ortiz Cofer’s “Catch the Moon” and W.D. Wetherell’s “the Bass, the River, and Sheila Mant”

Compare and Contrast Essay
Love is an emotion that deeply alters a person’s thought-process. This emotion can bring out the best of people or even make them question who they are and what they’re willing to give up for the person they love. In Judith Ortiz Cofer’s short story “Catch the Moon”, she suggests that love can change a person for the better by making them want to improve themselves. However, in W.D. Wetherell’s short story “The Bass, The River, and Sheila Mant”, he suggests that love can make a person try to be someone they are not, ultimately leading in disappointment and regret.

Don't use plagiarized sources. Get your custom essay on
“ Compare and Contrast: Judith Ortiz Cofer’s “Catch the Moon” and W.D. Wetherell’s “the Bass, the River, and Sheila Mant” ”
Get custom paper
NEW! smart matching with writer

Although both authors center their stories on the topic of love, they differ greatly from their character conflicts, character changes, conflict resolutions, and their themes.

In “Catching the Moon”, Luis Cintron and his father constantly argue and never get along very well. However, when Luis meets this girl named Naomi, he experiences an emotion that reconnects him with his dad.

Meeting Naomi causes Luis to experience love—an emotion he hasn’t felt since the death of his mother—and causes him to want to develop better character because he knows that his mother would want him to be happy. In order to prove his improved character to both Naomi and his dad, Luis searches all night for a hubcap that will match the one that Naomi is looking for. After hours of searching, Luis finally finds the hub cap and rushes to bring it to Naomi.

Cofer states that Luis, “…waited to give her [Naomi] the first good thing he had given any one in a long time” (Cofer, pg. 240). This quote demonstrates that because of his new love, Luis was ready to change his personality for the better and that love can truly reconnect old flames from within oneself.

“The Bass, The River, and Sheila Mant” portrays a different message than that of “Catching the Moon”. In this short story, the narrator faces an internal conflict between choosing over his two passions—Sheila Mant and fishing. The narrator has always dreamed about impressing Sheila Mant, but he wavers when Sheila criticizes fishing for being dumb and boring. Regardless of her opinion, the narrator continues his mission of impressing Sheila by taking her on a boat ride and going to a popular party. On the way to the party, a fish gets caught on the fishing line the narrator left out on the boat, and by the struggle the fish puts up, he knows that it’s the bass he’s been waiting all summer to catch. Emotions rush through his head, and even though the narrator has waited all summer for this fish, he chooses Sheila instead. The narrator cuts the line, goes to the party with Sheila, and has his heart broken when she chooses to ditch him for another guy.

From this experience, the narrator learns that there are plenty of fish in the sea and that he shouldn’t have changed himself just to get a girl to like him. He even goes on to say that, “There would be other Sheila Mants in my life, other fish, and though I came close once or twice, it was those secret, hidden tugging in the night that claimed me, and I never made the same mistake again” (Wetherell, pg. 150). This quote demonstrates the story’s theme of not changing who you are for love because it will only result in regret and disappointment.

Love is a very complex emotion. There are a lot of rules and regulations to love, as well as a lot of exceptions to these rules. All in all, in order to have a happy relationship, one must do want makes oneself happy. If someone’s happiness is put in jeopardy just because of a relationship, then the relationship was definitely not meant to be. In other words, when entering a relationship, don’t choose the better boy or girl; choose the boy or girl that will make you a better person.

Compare and Contrast: Judith Ortiz Cofer’s “Catch the Moon” and W.D. Wetherell’s “the Bass, the River, and Sheila Mant”. (2016, Mar 21). Retrieved from https://studymoose.com/compare-and-contrast-judith-ortiz-cofers-catch-the-moon-and-w-d-wetherells-the-bass-the-river-and-sheila-mant-essay 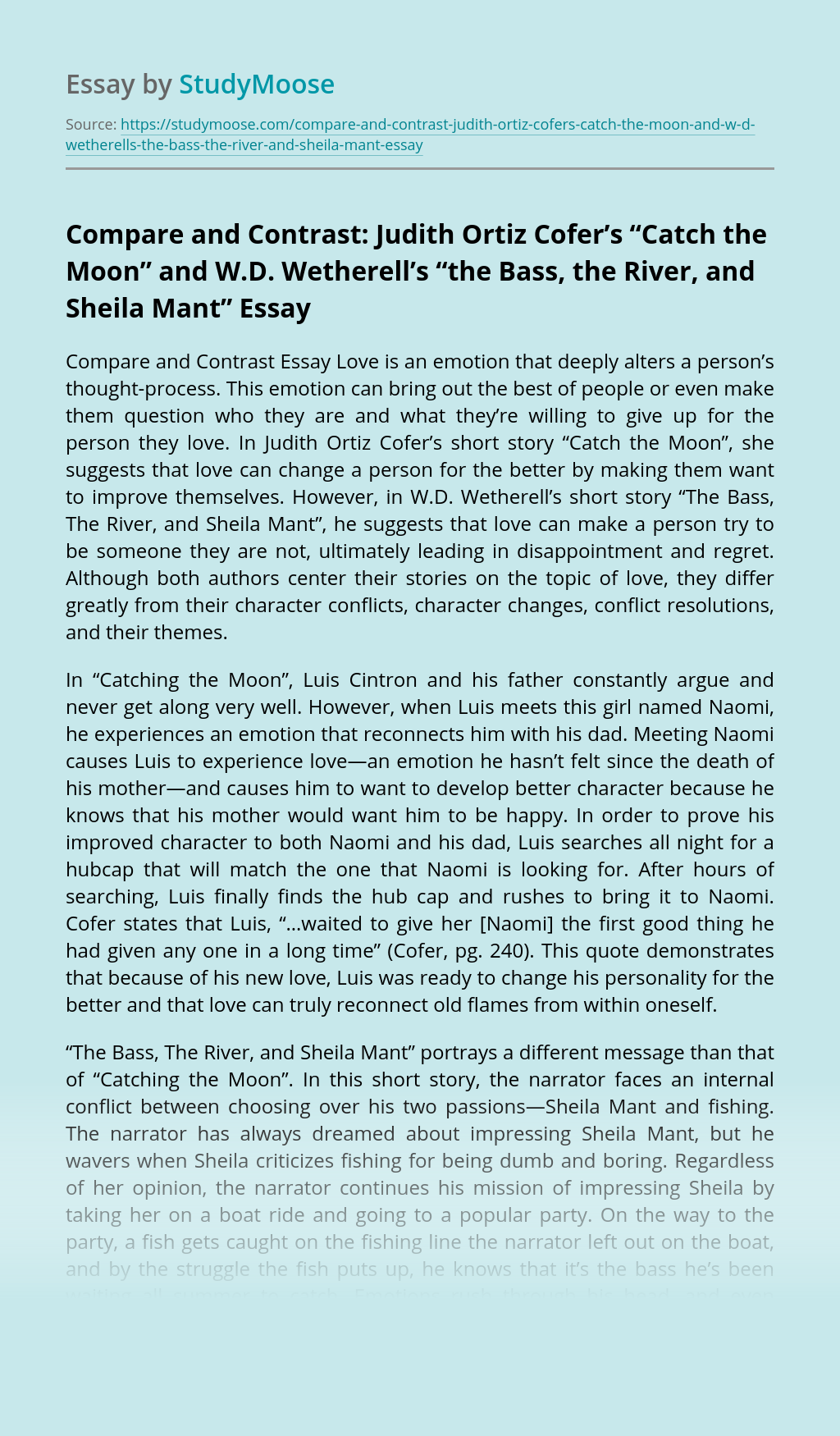