"Catch Me If You Can" Analysis

Catch Me If You Can directed by Steven Spielberg tells the story of Frank Abagnale Jr., considered one of the most successful con men of all time. I saw this movie recently after renting it from the video store, I found it so good that I had to buy it. Frank Abagnale Jr. is an astounding and interesting character. The real life Abagnale originally said that he did not believe Dicaprio to be ‘suave’ enough to play the role, but he certainly does pull it off.

Don't use plagiarized sources. Get your custom essay on
“ “Catch Me If You Can” Analysis ”
Get custom paper
NEW! smart matching with writer

Dicaprio’s acting is superb, and totally believable as a man who could lie to, deceive, and con everyone he met without once losing any of his charisma or charm. Hanks is also excellent, he plays the role of the obsessed FBI agent well, and also with a likable quality. The interaction between these two characters was great, it was interesting to see a budding relationship slowly build between two characters who were actually positioned against one another.

Proficient in: Catch Me If You Can

The movie takes place in the late fifties and early sixties over the course of five years of Franck Abagnale Jr. Frank Abagnale lived in a time of innocence and trust. You cannot help but identify with this lonely, troubled and brilliant child who through charm and inventiveness managed to dupe Pan American Airlines out of over two million dollars over the course of five year, all before the age of twenty-one. The brilliance and daring of his crimes inspires a visceral sense of admiration for this character.

Who would not want to live the jet set life of a playboy constantly outwitting the authorities at every turn?The foil for this rogue is one Carl Hanratty, played by Tom Hanks in this film. The juxtaposition of these different men brings to mind the fable of the tortoise and the hare. Abagnale represents the hare with his brilliant flight of a life; while, Hanratty embodies the tortoise with his slow trudging but ultimately victorious pursuit of the hare. Character and moral aside a film’s setting and tone are what make it, especially in this case.

The setting and tone change rapidly playing with the watchers emotions. Visual clues provide the clues for emotional shifts. Clashes of browns and brights in the school uniforms and teenage styles of the day force a geeky sympathy with the young Abagnale, and the blues and grays of the scenes depicting his home life slow the pace and lend a more serious note to the dialogue. In the portion of the film devoted to Frank’s exploits across the globe colors are used to show the vast differences between the two main characters’ lives. Scenes involving Carl Hanratty are done in blacks, grays, and whites to encourage thoughts of loneliness. Abagnale’s scenes, however, are done in bright neon, blues, and whites. These scenes are meant to be fun and light with an innocent quality that reminds us of our own childhood, and also tricks us into believing that stealing millions of dollars is somehow okay and justifiable. As Much as tone and color affect the character of the movie, nothing plays a bigger role than the setting.

The late 1950s and early 1960s are portrayed in this film as a time of innocence, where a simple switch in wardrobe changed the man. The era of three piece suits and hats was one marked by sharp class divisions. Both children and adults wore various uniforms throughout their daily lives. Appearance was everything in the late fifties, or so Spielberg would have us believe. Simply by picking up a briefcase and putting on a dark hat Abagnale went from playboy to businessman.

This is not unlike today where each subculture has their own particular uniform, though I believe we are more discerning than our grandparents that could just be wishful thinking on my part. Each subculture has its own uniform whether they are punks, hippies, or preppies and generally follow it, our need to blend in with the herd fulfilled. A haircut and a shave make a grungy hippie into an upstanding member of society in the eyes of all. We have a need to label and place all things in neat categories. Abagnale used this need to his advantage and exploited it with the style of a teenager.

The innocence of the times also played an important role. People wanted to trust Frank Abagnale and to believe there was nothing hiding behind his smile. A piece of paper and a ready wit were all Abagnale needed to become a doctor and assistant district attorney of Louisiana. It is appealing to think that when one tired of a career they simply moved on to another and learned on the job, especially careers as glamorous as those shown in Catch Me If You Can. Hanratty, once again, plays the foil and proves this particular point. A man who works tirelessly and does nothing but good is treated with disdain by everyone he comes in contact with. He lives a solitary existence, admittedly self-imposed, takes little joy in life, and tirelessly pursues Abagnale for years. He lives in sordid place while the criminal lives the high life.

What does this say about our society as a whole? Do we glorify the rogue who breaks all our laws but does it with such style? Do we degrade those that maintain our laws? We do.  We like those who break the laws and live unusual life. This is demonstrated by one particular line delivered by Abagnale Sr., played by Christopher Walken, “Where are you going tonight Frank? Some place exotic? Tahiti? Paris? You’re winning Frank and don’t you ever stop.”Catch Me If You Can was a major hit when released and it is easy to see why. Steven Spielberg has taken an interesting story and added his own personal touch to create a movie which is engrossing, yet incredibly easy viewing. The movie also has a cast to die for, which is another reason why it succeeds in every possible way. I will also admit that the ending is very nice and quite unexpected, the kind that actually brings a wide smile to the audience’s face. I think the real Frank Abagnale, Jr. is pleased with this film. It proves that even the most sneaky crook could be real likable.

"Catch Me If You Can" Analysis. (2016, Jul 04). Retrieved from https://studymoose.com/catch-me-if-you-can-analysis-essay 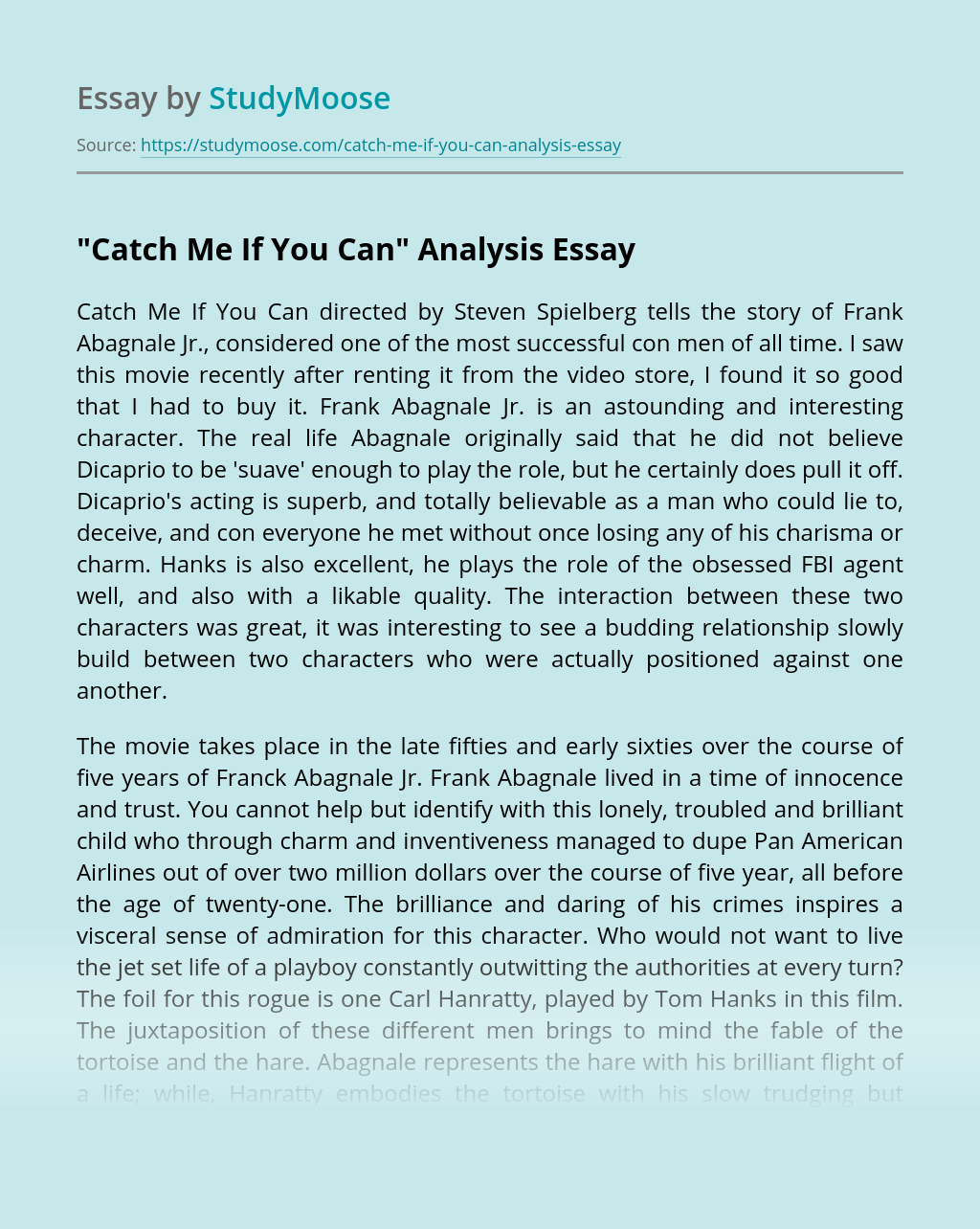