The Fear of Intimacy Theme In Fire by Rick Bass

“It’s lonely but it’s safe, in here and I can always live in fear, fear of you. We could, we’ll always be, with no work and no tries life in, “what if?” What if I say how I feel? I think I’m gonna tell you to make me want to share all my feelings is worth enough to love. Maybe that’s why am so guarded I don’t’ know what makes me special (oh) you don’t have to know I’m used to be by myself and lately, I’ve felt overwhelmed by you”, a song written by Zack Villere.

Don't use plagiarized sources. Get your custom essay on
“ The Fear of Intimacy Theme In Fire by Rick Bass ”
Get custom paper
NEW! smart matching with writer

Author Rick Bass was an American.

He was born on March 7, 1958, in Forth Worth, Texas Houston. He earned a degree in petroleum geology from Utah State University. His father was a geologist; most likely he got his inspiration from him. Rick Bass won several awards including the PEN/Nelson Algren Award in 1988 for his first story, “The Watch” and The James Jones Fellowship Award for his novel called “Where the sea used to be”. He was also an environmentalist who loves nature. “Fire” by Rick Bass was written in 2013. “Fire” is centered around the writer’s love for nature, his desires, attractions and relationships, some amount of tension, and conflicts which he expresses in the valley where he settles.

The story focused on two main characters, Joe and Glenda the runner, who were physically attracted to each other but due to fear, they were unable to declare their true feelings because of previous relationships which caused a fear of intimacy.

Fear of intimacy on an intellectual basis shows the inability of a person to express his or herself when communicating verbally. According to psychologist Sigmund Freud, “human beings capacity to make attachment to other people was the consequence of a process which occurs during the first five years of life” There are some factors that affect persons in building relationships or even just having a basic conversation and these are fear of anxiety, avoidance, and fulfillment that affects relationships. The early experience that a mother and father or even guardians have with a child can create a great impact in their adult life which can be a barrier in forming meaningful relationships. In chapter one of the story “Fire”, the narrator mentioned that he was unable to maintain relationships. Women come and go into his life. He believed that something was wrong with his life and feared of being intimate with women. He seemed to avoid opening up about it or even try to get help.

From an intellectual perspective, Joe is suffering from a psychological disorder that has to do with a disturbance of thought and behavior. This seems to be a dysfunctional problem coming from his childhood. The way he expressed himself in the story and to Glenda showed that he had fear and anxiety. According to Laura Portoles Dias, in her book, “Human Relations”, states that, “Just like the garden that needs soils rich in nutrients, our human relations skills are the same. To make our human relations skills grow, we need to look at our underlying personality characteristics, attitudes, and self-esteem that could be helping—or hindering—our ability to relate to others” (21-22). In “Fire” by Rick Bass, Joe’s anxiety was a result of deficiencies in is human relationship skills and possibly low self-esteem due to his upbringing.

The fear of Intimacy from an emotional perspective takes into account a person’s thoughts and feelings. Fear, with respect to emotion, can come across as a form of anger, been cold or indifferent. Not all men are afraid of relationships but many men are. An anecdotal data proves that men score higher in fear of intimacy than women. Men often are afraid of letting down their guard. They feel that they are vulnerable. Most women while growing up were exposed to be more socialized and engaged in activities, handling emotions and relationships than men. Trauma from past experiences during childhood or adulthood, absent from parents, and being abused can adversely affect a person’s emotions with respect to intimacy. If a partner leaves the relationship or cheats this can cause men to avoid emotional intimacy, thus become barriers. Even if they are interested in or having a desire to be with or close to someone, because of past experience this might cause emotional pain, and distance. Most times these experiences can spill over into even social friendships which cause persons to avoid being close to other persons.

The narrator formed his own opinion of the relationship on the assumption that Glenda was leaving soon which to him it makes no sense starting a romantic relationship. He hid his true feelings by avoiding every form of conversation or expression of his true feeling towards Glenda. Maybe he was afraid of being hurt because of the many relationships he had in the past.

In the story “Fire” by Rick Bass, the Narrator said, “I do not think women liked Glenda very much except for Nancy”. He was implying that Glenda had poor interpersonal relationships in the way she thinks and communicates. The eBook entitles “Human Relations” written by Laura Portolese Dias illustrates a workplace situation. “At work, Jenny avoids interpersonal relationships and small talk because she is uncomfortable revealing too much of herself. When choosing projects teams, people rarely want to work with her even though she is capable of her job.” Both Glenda and Jenny unavoidably allowed their emotions to adversely affect their interpersonal skills and relations. They were very private.

The Fear of Intimacy affects a relationship sexually. It is the inability to share oneself sexually. Many people suffer from identity whether being gay, lesbian, or heterosexual. Individuals should be able to express themselves and don’t have to worry. However, there are blockages stemming from our culture, the environment, and moral beliefs. Joe state there were times when he and Glenda would jump into the pond, she would ask him to place his hand on her breast and he would feel the pondering of the heart very forceful, he would caress her leg in a passionate way that can be viewed with some amount of romance which signals love or intimate relationship.

The word “Fire” sends off a radiant light that reflects and gives a feeling of a burning desire for intimacy. Even though the narrator and his friend Glenda were experiencing that kind of feeling towards each other they were controlled by their own fears of intimacy. That caused them to avoid being too close hence they continued in a casual friendship that stifled the relationship between them. “Fire” by Rick Bass, from a psychological perspective, ends with a strong viewed that fear was the problem that caused the relationship not to materialize. Glenda leaves without saying goodbye. Both Glenda and Joe were suffering from loneliness and insecurity but they choose not to express their feelings. “It’s lonely but it’s safe, in here and I can always live in fear, fear of you. We could, we’ll always be, with no work and no tries life in. What if? What if I say how I feel? I think I’m gonna tell you to make me want to share all my feelings is worth enough to love. Maybe that’s why am so guarded I don’t’ know what makes me special (oh) you don’t have to know I’m used to be by myself and lately, I’ve felt overwhelmed by you”, a song written by Zack Villere says it all. Laura Portoles Dias’s book entitles “Human Relations, quoted psychologist Sydney Jourard, “most joy in life comes from happy relationships with other people”. He shared experience with John, a manager, who was very talented but lack human relation skills. While he can plan and execute it effectively, no one likes to work with him. He was unapproachable; he lacks people skills” (5). Many times relationships are lacking in good communication. Persons fail to express themselves effectively; they come across badly or misinterpret cause relationships to end because of the fear of intimacy.

The Fear of Intimacy is a psychological situation that affects an individual intellectual capacity of the mind. How a person processes information base on emotional feelings towards a person or thing, can spill over in one sexual behavior towards a relationship. The sooner one can recognize this behavior and get help the better and healthier their life and relationships will become. In the case of Joe and Glenda, the lack of communication led to Glenda leaving without saying goodbye, and Joe is left experiencing a deep sense of loss. Both Joe and Glenda failed to find true love because of the fear of intimacy.

The Fear of Intimacy Theme In Fire by Rick Bass. (2020, Sep 15). Retrieved from http://studymoose.com/the-fear-of-intimacy-theme-in-fire-by-rick-bass-essay 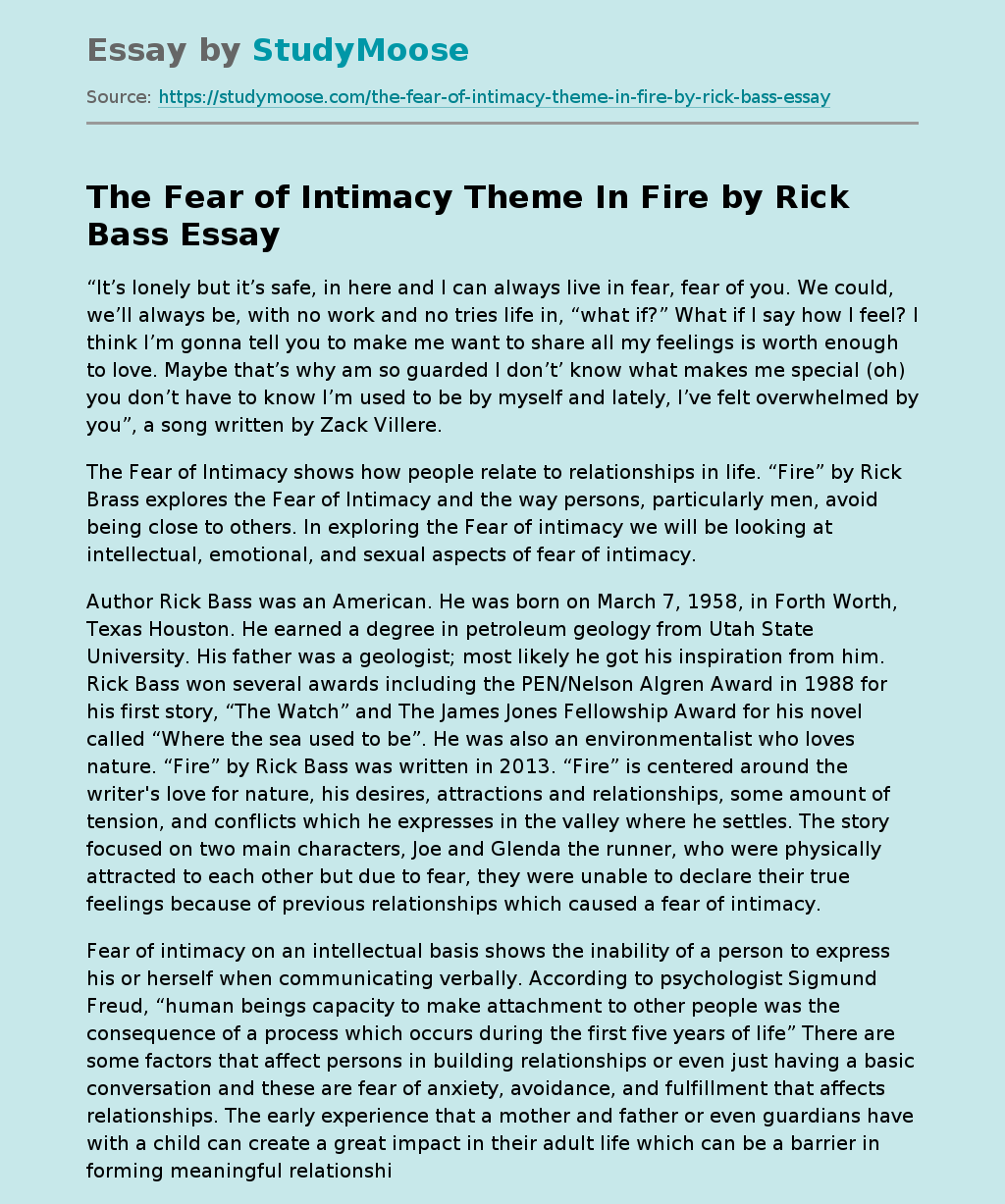