Why do so many people believe in conspiracy theories?

In this essay I will explore why such a large number of people claim truth in conspiracy theories surrounding the September attacks of 9/11. I will analyse the idea that citizens will often blame the political power, instead of agreeing with some more believable views. Furthermore, I will investigate the theory that people will create these conspiracies as a way to balance out the huge scale of the crime; in terms of 9/11, they saw the enormous size of the crime and the rippling effects in had on the country, and so, were not accept the easy explanation or terrorise involvement.

Don't use plagiarized sources. Get your custom essay on
“ Why do so many people believe in conspiracy theories? ”
Get custom paper
NEW! smart matching with writer

People in political power often come under scrutiny for their actions, in many ways people blame them for any minor difficulty they face. Similarly, we can see this in the way President Bush was accused of devising the 9/11 attacks. In 2015, Cambridge university carried out an experiment, that found that Over 50% of people believe at least one conspiracy theory . Similarly, a 2004 poll by Zogby International revealed that 49 percent of all New York City residents believe that the United States government had prior knowledge of the attacks.

As you can see, most of these conspiracy theories are constructed with limited, questionable evidence and a huge vendetta against any people of authority within the political system of the country. For example, in 1916, a series of shark attacks of the coast of New Jersey caused a significant decline of support for the current President, Woodrow Wilson. So, why do people prefer to create or agree with wild, baseless ideas instead of those explained by the elected democracy in place? Well, Professor Larry Bartels, a political scientist at Vanderbilt university, may have a theory; he mentioned that people will ‘blindly reward or punish the government for good or bad times without any clear understanding of how the governments policies have contributed to this.

’ In this sense, we are constructing our beliefs to support what we want to be true, rather then what we leading from an unbiased perspective, that could allow us to create a clearer view of the reality of the situation. For many this means disregarding any evidence that rivals what they want to believe. In the same way, a large number of Americans believe that their government and president knew about the attacks before hand, and stood down NORAD (North America Aerospace Command Defence) and allowed the hijacked planes to meet their targets. They claim that this was to justify the American military to entering and attacking Iraq and Afghanistan to start the ‘war on terror’ that rages to this day, but also to claim many oil reserves within the countries. However, they may not realise that NORAD were only warned of the planes missing, not hijacked, minutes before they crashed. The longest warning NORAD was given for one of the planes was eight minutes, for flight 11, they were told of flight 175 as it was crashing. Due to this it is clear that there is no possible way they could have dispatched fighter jets from across the country with enough time to catch up with the hijacked planes and carry out a forced landing. Similarly, many believe that the September attacks were a USA/Israeli plot to create a new world order. People theorise that the wars carried out across the Middle East were purely to grow the sphere of influence for America in this area. It claims that financial corporations and arranged the attacks to justify their militaristic actions across poorer countries purely to strengthen their grip on the middle East’s natural resources. However, the fall of this theory comes from the fact there is no evidence at all. No documents, no one has come forward; there is no proof that this is true. If it were, with something of this scale; it would be likely to have a slip up, one person at least would come forward to bring forth the truth. But, as we can see, this has not happened, so it is highly unlikely that this is true. Furthermore as we know, the US Governments illegal actions do not often remain a secret, take the Watergate hotel for example, bugged by the Republicans, to gain information of the Democratic Party but also other individuals of interest, operating on the orders of the President. Perhaps even , in the same vein of 9/11, Operation Norwood. The CIAs plan to initiate terrorist attacks in America itself, blame it on Cuba to declare war on them. The parallels drawn here, between Norwood and 9/11 itself, are a frightening in a way, but as we can see, the government do not have the ability to hide their illegal actions, especially from such a large scale operation. From this, we can see that these ‘truthers’ base their facts on purely blaming those who they feel are to blame, even without sufficient evidence, If it makes a person feel safer knowing there is someone to blame for their misfortune, then psychologically they feel safer more content to hold those views rather then to view a situation from fair-minded perspective. In the end, we want to feel comfortable in what we believe, not necessarily right.

Furthermore, we can see the determination of the believers of the theories, these so called ‘truthers’; from their ability to take any minuscule evidence and twist it into their advantage. Some claim the US government deliberately allowed the attacks to take place, others, that the building were destroyed in a process called controlled demolition. The more outlandish, are adamant that there were no planes involved at all, and the damage was done by missiles. They even may claim that there planes involved at all, and that the tens of thousands of people that saw the collision, saw merely holograms. During this time, the speculation that 9/11 had more to it than we were told, had grown exponentially. In 2006 the film ‘ loose change ,’ became one of the most popular videos of Google video. It has been downloaded over eleven million times. Its cynical, yet informative view of the attacks, calling all to take action for those who lost their lives, to seek the truth, appealed to the millennial generation. However, perhaps the fact that it continuously is removed by the FBI, on whichever platform uploads it, has attracted the attention of those hesitant to believe is the theories against their own government. Why do the American government see this video, made by two men on a laptop, as such a threat? Most experts will say that the multitude of conflicting theories come purely from the disbelief that a rather small group of people, from a impoverished, destitute country can cause such a catastrophe in a wealthy country that is believed to have one of the most advanced economies in the world. We can see, that the vast majority of these conspiracy theorists simply can’t accept such a mundane, uncomplicated explanation, as it does not seem to be satisfactory. Indeed, the recent explosion of social media has not seemed to quell these hypothesises. If anything, It seems that the ability to share ideas with like- minded people, has caused a surge of protests against governmental secrecy. However, this could be caused from a ‘crippled epistemology’ this is where a group of people have limited information of an event/person, but what they do know, is either wrong or has very little truth to it. Most of their information would come from these ‘news’ accounts on social media, that draw on an audience with outrageous claims portrayed as facts. Furthermore some so called ‘conspiracy entrepreneurs’ may write papers or books claiming to expose those of authority, preying on a person natural instinct to blame those in power, allowing the author to gain money and power for themselves. Such as ‘solving 9-11: The Deception That Changed the World’ that became a best seller, just from its claims of the ‘truth’. Books like this, pander to the impressionable minds of the young and the ignorant, by providing the so called answers to what happened during that pivotal point in history.

In Conclusion, the believe in conspiracy theories, especially those centred around 9/11, are not going to be quelled any time soon. However, they do cause violence and a divide within the country, so the government should try to prove the falsity of at least some of the major claims against them, if only to aid those told misconceptions by those who are ill informed or chose to be ignorant. Indeed it is likely that attempting to dispel these rumours could, and most likely would, cause some with extreme views on this matter, to vehemently oppose the government in regards to this. Moreover I have explored why people do believe these theories, from distrust in the government itself and a preference to keep holding these beliefs as a way to feel comfortable not necessarily right. But also, the use of social media, on which people can share beliefs and theories among each other and to impressionable young people, causing them to question their beliefs of terrorist involvement in the attacks.

Why do so many people believe in conspiracy theories?. (2019, Dec 07). Retrieved from https://studymoose.com/why-do-so-many-people-believe-in-conspiracy-theories-essay 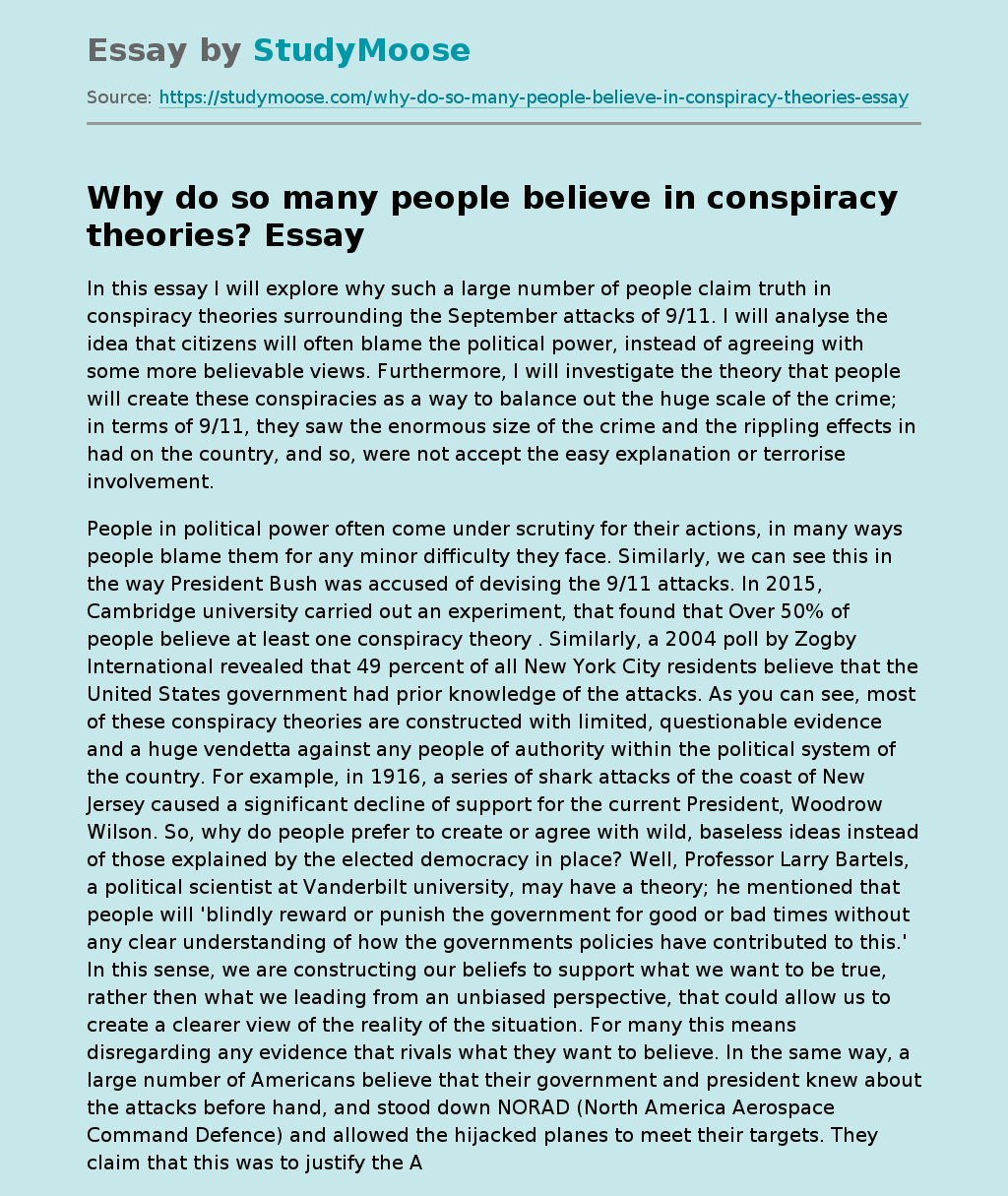