Which of the different types of leadership profiles presented in the literature best describes Steve Jobs?

Leadership is the process that a manager follows in order to inspire, motivate and direct subordinates towards the achievement of the company’s goals (Jones, George, Hill, 2000).

Transformational leaders have a strong vision to reshape the future by creating new realities.

They have four main characteristics; they are charismatic, they use inspirational motivation (they come with a vision that is inspiring to others), they use intellectual stimulation (they encourage subordinates to work harder and think creatively) and they have individual consideration (they care and have concern for the well-being of their subordinates) (Mihiotis, 2005).

Transformational leaders transform their followers in three ways; The followers are convinced that their job is important and vital for the achievement of company’s goals.

The followers are aware of their own needs for growth and development. Finally, they are motivated to care and work not only for their own benefit but for the good of the whole company (Jones, George, Hill, 2000). Steve Jobs, having been awarded the CEO of the Year 2009, was a transformational leader. He was a charismatic leader who had a strong vision for his company and he wanted to introduce products that will change the whole world. He transformed several companies over the years with his nearly flawless intuition, his passion and enthusiasm.

Jobs’s emphasis in constant innovation and renewal, leaded Apple to stay at the top and be the pioneer in many product categories (iPhones, iPods, iPads).

In 2011, Apple turned to be the planet’s most valuable company (McCracken, 2011). He had a tremendous confidence in his instincts (he was very self-confident) and he was a perfectionist. He had a strong expert power as he had a deep knowledge and understanding of products technology and an amazing ability to captivate his employees and audience through his speeches; a really gifted speaker (DuBrin, 2010).

As focus is critical for effective leadership, Steve Jobs, when came back to Apple, managed to say ‘no’ to many Apple products and focus on the most important issues. He thought that this tactic was essential to keep resources available for the iPod. His advertising slogan “Think Different” in 1997, got people talking again about Apple (Ambler, 2008). If we wish to analyze his leadership style we would say that he was a highly autocratic and centralized leader (Kemper, 2003). He admitted that 100 employees were reporting directly to him (Morris, 2008).

He was rude towards subordinates (McCracken, 2011), introvert, extremely impatient, manipulative and boorish (Young, Simon, 2005). Being very self-confident, perfectionist and unwilling to hear views contrary to his own, his participative leadership was low and he was infamous for creating an atmosphere of fear in the company. His behavior leads us to say that his consideration level was rather low and his initiating structure level was rather high. There is no doubt that he didn’t care much towards workers but much more for the way that work was structured.

On the other hand, Steve Jobs was saying that employees should have passion. They should fall in love with Apple to get things done successfully (Morris, 2008a). He insisted on having weekly meetings (Morris, 2008b) with his team in order to review the whole business and for all to stay on the same page (Ambler, 2008). An Apple’s veteran comments “He wanted you to be great, and he wanted you to create something that was great” (McCracken, 2011). Although he remained difficult, he managed to teach a whole company to think like him and unite his team towards his vision. 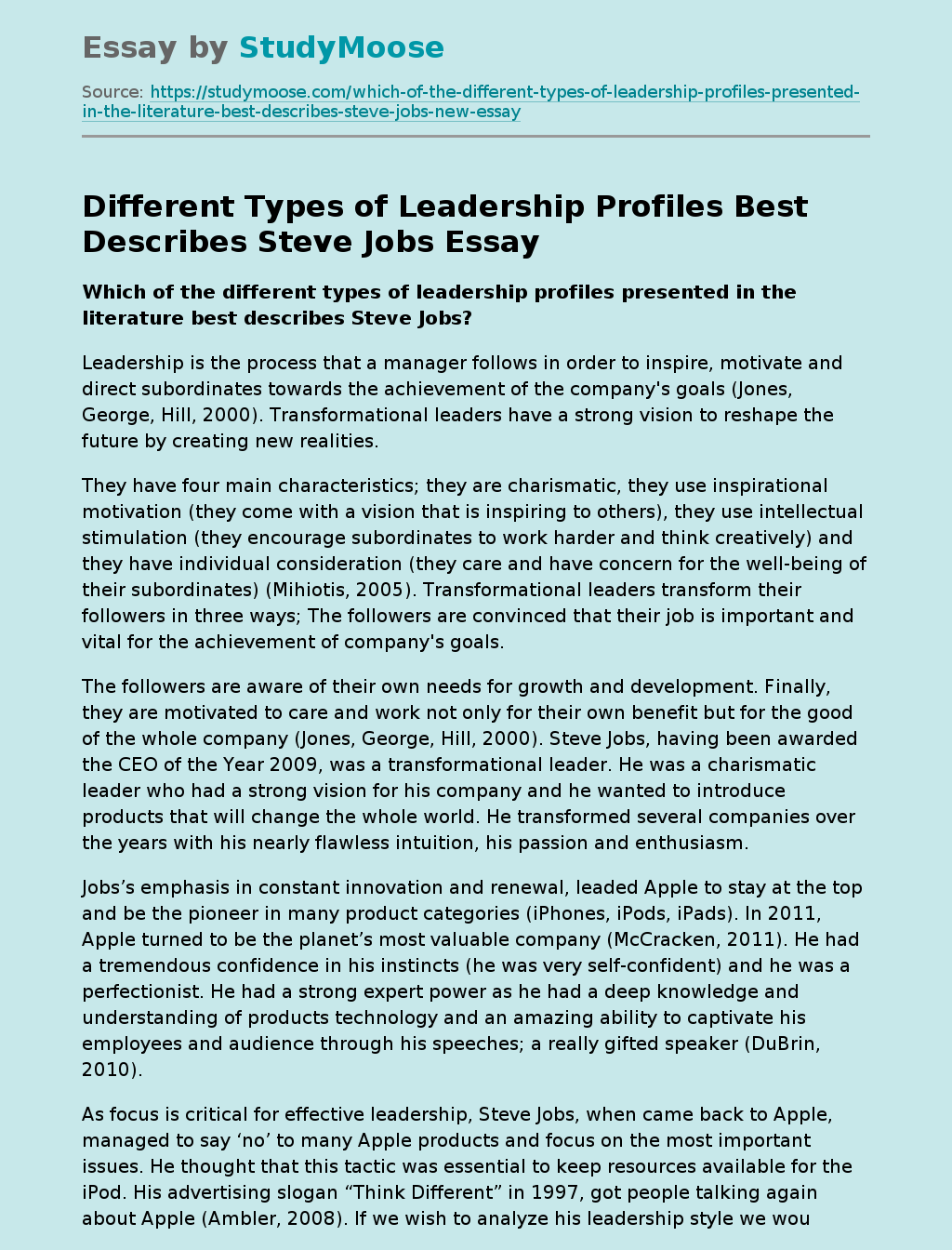