What Makes Thanos a Great Villain?

Not all villains are purely, irrevocably, and inherently evil. More than not, villains are written as insufferable characters with little to no hope for redemption. Although, upon realizing the unfortunate situation that made them become that way, one can’t help but feel sympathetic. In fact, if oneself was put in these so-called “villains” shoes, many of these characters in pop culture would not be looked at as completely evil. For example, the main villain of Avengers: Infinity War and Avengers: Endgame, Thanos, who is a god-like being who travels from planet to planet killing half of the population.

Don't use plagiarized sources. Get your custom essay on
“ What Makes Thanos a Great Villain? ”
Get custom paper
NEW! smart matching with writer

This character has a purpose, Thanos does not commit these horrendous acts simply because he enjoys it, he is searching to collect all six of the Infinity Stones for a gauntlet to make him powerful enough to complete his ultimate goal, to create a universe free of suffering.

Why might the world become a better place by cutting the population in half? On Earth, numerous amount of our biggest problems place the blame on overpopulation.

Such as starvation, access to clean water, pollution, and climate change. In Avengers: Infinity War, Thanos explains his home planet Titan faced similar issues, which caused the extinction of his species and planet. In Avengers: Infinity War, a conversation between Doctor Strange and Thanos, Thanos explains that he offered a solution to his planet on the brink of extinction to cut the population in half at random, both rich and poor, equal. They referred to Thanos as a mad man and rejected his solution of genocide, but what he predicted came to pass.

Thanos claims, “I ignored my destiny once, I can not do that again”. With this in mind, one can see why he feels obligated to “save” the universe from an identical fate by doing what he suggested in the first place. The assumption that Earth has a natural capacity for “room” or a limit to the number of people it can support is based on the concept of overpopulation. In the same way, this brings forth the assumption the world resources are finite or limited. In Avengers: Infinity War Thanos explains to his daughter Gamora, “Little one, it’s simple calculus. This universe is finite, its resources, finite. If life is left unchecked, life will cease to exist. It needs correcting”. Therefore, at any point in time within an environment, essential resources such as food, water, and shelter may be limited. Thus, bringing competition amongst each other, which is the incentive behind evolution by natural selection.

Thanos was not the only being to believe overpopulation will bring the end to worlds. Two naturalists, Charles Darwin and Alfred Russel Wallace who both brought upon the theory of natural selection, were inspired by Thomas Robert Malthus, who wrote ‘An Essay on the Principle of Population’ published in 1978. In this, Malthus alerted that a global famine would occur if the population would continue to grow faster than the available resources. If too many people are a problem for the environment, how can we end overpopulation? In Avengers: Infinity War, Thanos wrongly believes the answer is to just wipe out half of the population on every planet in the universe. From a moral outlook, this solution is obviously wrong which is why The Avengers try to put a stop to him but is Thanos right? Will reducing the numbers bring positive results in the long run? While speaking to his daughter Gamora Thanos says, “ Going to bed hungry. Scrounging for scraps. Your planet was on the brink of collapse. I was the one who stopped that. Do you know what’s happened since then? The children born have known nothing but full bellies and clear skies. It’s a paradise”. With this in mind, in reality, according to an article by Forbes Magazine, “population size is the net total produced from rates of birth and death Thanks to better sanitation, medicine, and healthcare, the global rate of deaths hasn’t decreased for hundreds of years, so it’s unlikely that overpopulation would be slowed by higher mortality”.

Thanos’ ultimate goal is to simply create a universe free of suffering, which doesn’t sound too far off from what the ultimate goal of Tony Stark A.K.An Iron Man. Since the beginning of the Marvel Cinematic Universe, Iron Man although he could not put a face nor a name to it he has been aware that something, somewhere would come and threaten Earth and everything he cares for. Stark became a hero because he felt he could use his money and technology for the benefit of the rest of the world after being an arms dealer for the military. He nearly killed himself in an effort to save New York in the first Avengers Movie against what we now know was Thanos’ first attack on Earth, an effort which caused him significant mental pain for years to come. The idea that these threats were only going to get bigger and worse haunted Stark and created an obsession to protect the world which caused him to create Ultron which happened to be one of the most catastrophic events in the franchise, second only to Thanos.

In Avengers: Infinity War, where Tony and Thanos finally come face to face, we begin to realize both of them have a similar motive but went along different paths in opposite directions, they both felt and took on the responsibility of saving the universe feeling they were the only ones who could do it, but met a numerous amount of obstacles and morally reflecting questions which made them come to a point of realization that they were wrong in the execution of their motive. In sum, when Thanos says to Stark, “I hope they remember you” in the midst of their cinematic battle, he is talking about himself as much about Stark. The goal was the same for both of them, to save the universe and make all else better.

What Makes Thanos a Great Villain?. (2020, Nov 10). Retrieved from https://studymoose.com/what-makes-thanos-a-great-villain-essay 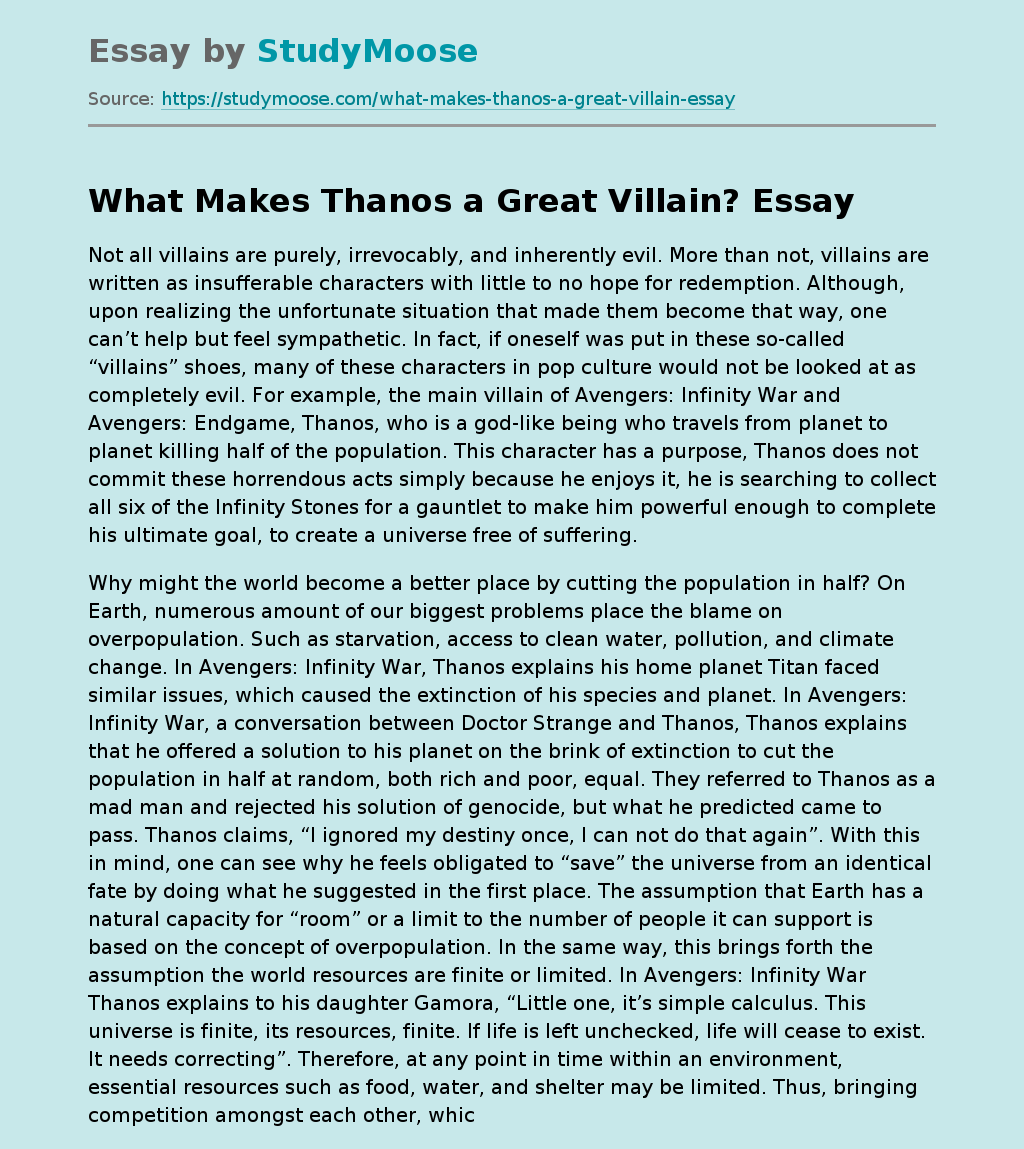