What Is Your Opinion of Zoos

Recently, zoos have come under a considerable amount of criticism from animal activists, who claim that it is unfair to keep animals in cages and that the money spent on protecting them in their natural environment. Zoologists, on the other hand, insist that zoos benefit not only human beings from an educational standpoint, but that they protect the animals themselves. What is your opinion of zoos?

Nowadays, there has been a great deal of controversy about the animals’ rights and if zoos serve to protect them or they exacerbate the problem of animals in danger of extinction.

Don't use plagiarized sources.
Get Your Custom Essay on What Is Your Opinion of Zoos Just from $13,9/Page

Keeping animals in zoos has both benefits and drawbacks which should be taken into account.

Zoos benefit both animals and human beings. One of the central advantages lay in the education that people receive when visiting a zoo. They receive firsthand knowledge of how animals behave and act. Surrounding the exhibits, zoos usually have information describing the animal, its history and natural location.

Learning about animals also brings empathy to many people, raising awareness about their endangerment in the wild. Zoos often take an active approach in helping animal population, as they breed captive species. In addition, animals are safe in the zoos, as they have security and food. Sick or injured animals can be treated immediately, giving them a higher chance of survival. Besides, animals in zoos are fed on a regular basis and there is no threat for them –particularly the young ones- about starving or get killed by other animals or hunters.

The other side of the coin is the captivity the animals face. No matter how nice the zoo and the stuff are, the room is limited for zoo animals, which can be especially troublesome for large animals that are prone to roaming. Taking animals out of their habitat serves an ethical issue, because of its focus on human benefit opposed to animal benefit. Another disadvantage is that animals are deprived from developing their survival skills. There is no doubt that wild animals can never survive if they are released in the wild, as their ability to fight or hunt for food may disappear. Finally, many zoos lack proper maintenance and animals may live under poor conditions.

All things considered, even though there is no doubt that more funds should be allocated to saving animals in their natural environment, one should also bear in mind that zoos provide numerous benefits to animals as well as to humans.

What Is Your Opinion of Zoos. (2016, Dec 11). Retrieved from https://studymoose.com/what-is-your-opinion-of-zoos-essay 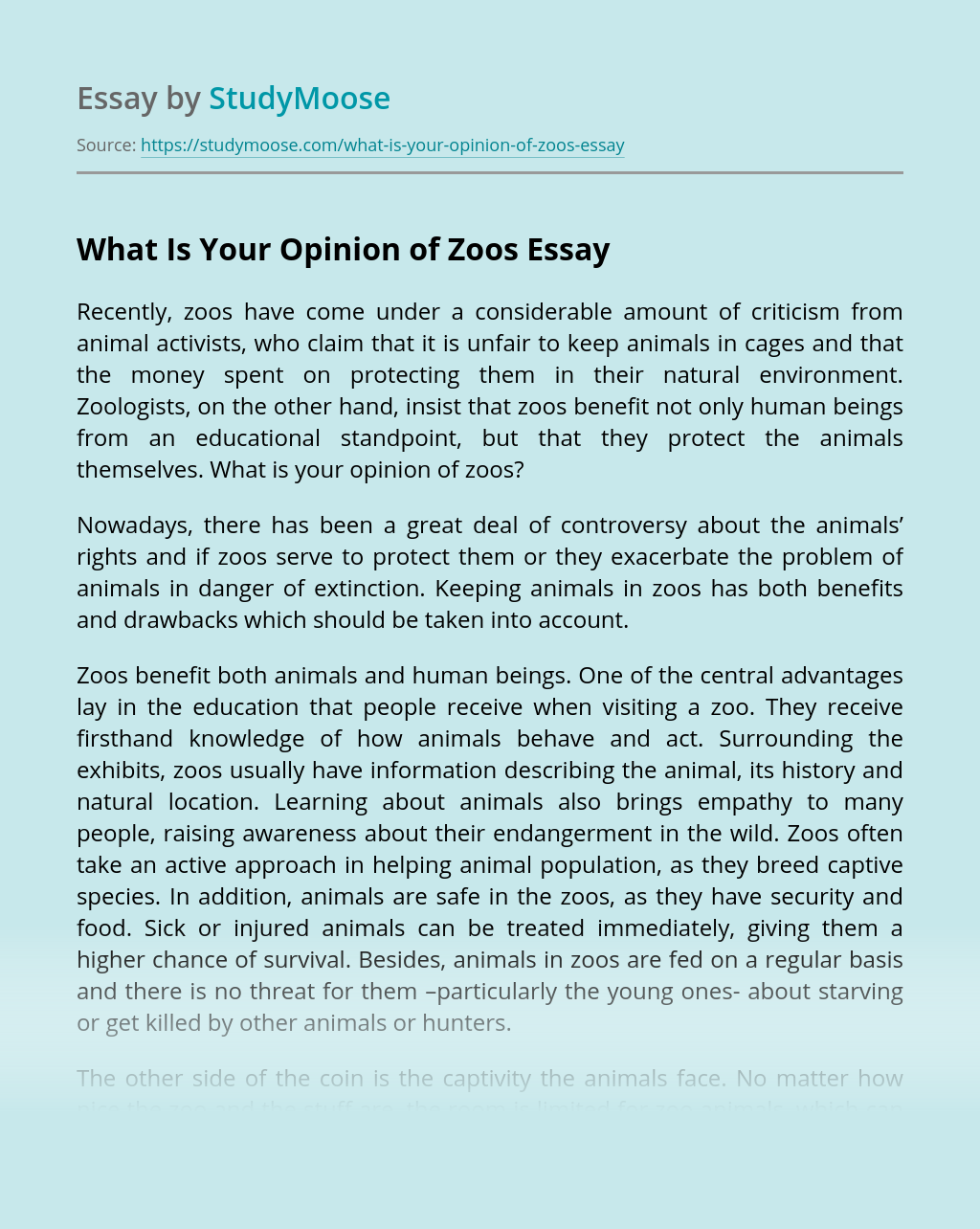