Are Zoos Unethical to Animals

Recently, contentious debates have risen over the ethical dilemma that zoos pose regarding animals’ rights, freedoms and natural behavior. Many people consider zoos amoral and cruel while others have the notion that they are ethical because they help in research, conservation and proper treatment of wild animals. This sensitive topic has induced different reactions and sparked great debates as people strive to do the right thing. According to Tuyl (2008), Zoos are enclosed spaces and cages that abode animals. Hutchins and Keele (2006), argue that, zoos provide excellent conditions for wild animals, as they are liberated from their natural habitats, which are harsh and unforgiving.

Don't use plagiarized sources. Get your custom essay on
“ Are Zoos Unethical to Animals ”
Get custom paper
NEW! smart matching with writer

They argue that wild animals are better placed in the zoos because they are provided with free meals and a life that is free from parasites, and harsh weather and predators.

In addition, zoos promote the transmission of zoonotic diseases (Tuyl, 2008). Therefore, concerning animal rights and freedoms, zoos are highly unethical and should be banned to endow wild animals with an opportunity to lead lives free from human interferences. It is amoral to keep animals in the zoos because they act as cages that retract the wild animals’ freedom. Various animal rights organizations advocate for the freedom of animals, a condition that is only attainable when they are in their natural habitats.

Zoos act as prisons because of their small sizes and restraining the ability as compared to wild jungles, therefore, denying wild animals their freedom to roam and act naturally.

It is unethical to keep wild animals locked up in a cage, especially in this era when people have realized that every living being should be allowed to have its freedom. All living beings are entitled to their rights. Wild animals have liberty to live in the jungles because that is their natural habitat, which is a fundamental right. To take animals away from their usual environment and confine them in cages and enclosed spaces provided by the zoos is a complete violation of animal rights. This denies wild animals the chance to act naturally and engage in the relationships that nature intended for them. Wild animals are unable to lead quality lives when they are taken to the zoos (Jensen & Holmes, 2007). They infringe on animal rights due to restrictions, therefore, causing some wild animals such as elephants to develop depression because of detachment from their herds (Hutchins & Keele, 2006). Human beings should allow wild animals to live in their natural habitats, in the same manner that no individual would love to be transferred from the comfort of their home and re-located into the jungle.

People claiming that it is just to keep wild animals in the zoo have the notion that this action is purposeful for research and the conservation of endangered species. However, appropriate actions can be taken in the wild animals’ natural habitats, therefore, leading to better results. It is unethical for human beings to interfere with the lives of wild animals for research. It is inappropriate to transfer a wild animal from its habitat to study it. The results would be skewed because the animals’ natural behaviors would change with the changing environment. Human interference is also leading to the cause of animal extinction (Tuyl, 2008).

Therefore, the appropriate and ethical action to take in the interest of extinction and research is to reduce human interference to obtain the best results regarding both issues. In conclusion, it is not ethical to keep wild animals in a zoo. As indicated in the paper, zoos interfere with the wild animals’ freedoms, rights and the ability to live naturally. Some people argue that zoos are helpful in animal conservation regarding endangered species, but it is also crucial to consider the main problem, which is human interference (Jensen & Holmes, 2007). Zoos are unethical to animals.

Are Zoos Unethical to Animals. (2016, Apr 15). Retrieved from https://studymoose.com/are-zoos-unethical-to-animals-essay 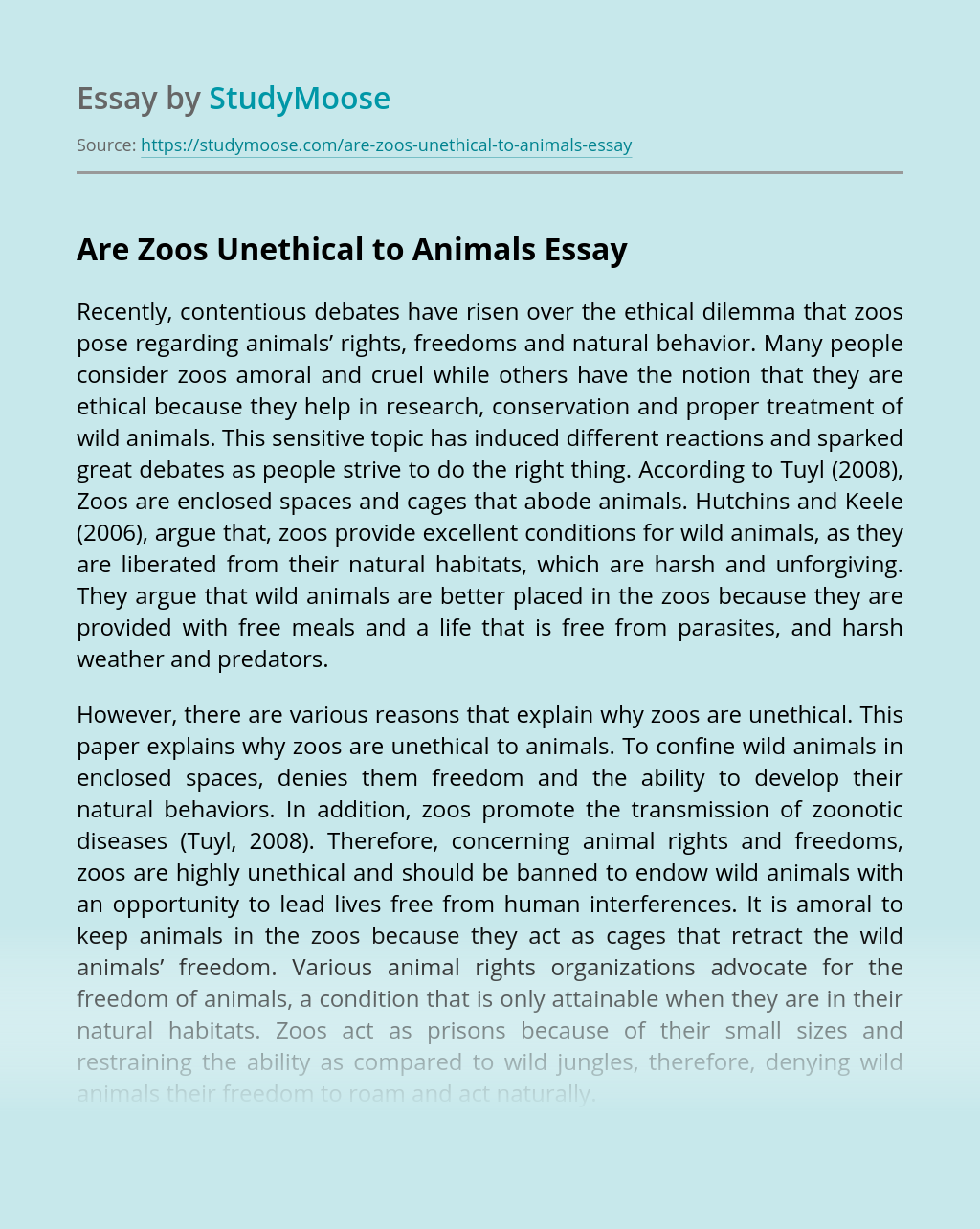