Are Zoos Internment Camps for Animals

Majority of people are familiar with the popular animation movie, Madagascar. The plot includes four spoiled zoo animals that escape to the wild and quickly find out that it’s not what they expected. Now this movie has quite the comedic take on a much bigger issue: whether the zoo is an internment camp for animals that should be shut down or not. Zoos are seen as a tourist attraction while the animals are used for the entertainment. Honestly ponder this question: who didn’t want to go to the zoo as a child and see Bobo the famous seal do silly yet entertaining tricks? The concept of the zoo takes away animal’s natural instincts to live in the wild; however, it is understandable if an animal or a certain species that’s close to extinction is taken in by zoo care.

Don't use plagiarized sources. Get your custom essay on
“ Are Zoos Internment Camps for Animals ”
Get custom paper
NEW! smart matching with writer

Therefore, zoos are an internment camp for those animals that are capable of taking care of their selves in the wild and aren’t for those that are in need of care and close to extinction.

Regardless of how much effort is put into recreating an animal’s specific habitat, it will never be the same. Orcas for example, would have to swim the circumference of SeaWorld’s main pool 1,900 times in ONE day to replicate the 100 miles they swim everyday in the vast oceans (“8 Reasons Orcas Don’t Belong at SeaWorld”). Due to such a small habitat, orcas are forced to live and perform next to other whales either equal if not bigger than them.

This results in anxiety and tension between the orcas which causes them to fight. A factor such as fighting can lead to early, unexpected deaths in parks and zoos. Animals die prematurely in zoos. African elephants in the wild live more than three times as long as those kept in zoos. Even Asian elephants working in timber camps live longer than those born in zoos (“10 Facts about Zoos”). Animals were created to live in the wild so, naturally when born into a zoo their natural instincts aren’t developed. If there is ever a case when an animal would have to be released back to the wild from a zoo, the animal wouldn’t necessarily be as prepared as it would have been actually growing up in the wild.

The most important aspect of zoo captivity is the process of being taken away from families and from freedom. The animals cannot run, roam, climb, hunt, forage, choose a partner, or be with others of their species (“Entertainment Issues: Captive Creatures”). Humans tend to forget that we have relation to animals due to our evolution and complexity especially when it comes to feelings; however, there is no bond stronger than that of a family bond. Captivity can bring a sense of loneliness, yet that void could be filled with the animal’s family…that in some cases won’t be there. It is understood that a zoo keeps animals safe. This is true to an extent. Over a six month period, six animals died at the National Zoo due to the misuse of harsh chemicals to kill off rats (“Entertainment Issues: Captive Creatures”). In the wild, this domestic issue would not have been a problem. A zoo can only keep animals safe for so long without hurting them, which is by shielding them from the animal that they really are in this world. This “shield” will eventually cause animals to lose their nature all together. It’s possible to give zoos the benefit of the doubt when it comes to taking care of endangered species. Still not letting zoos off the hook yet, extensive research has to be put into the species before taking the animals in. Even after that research has been put in who’s to say that that particular zoo is capable of handling such a creature. There are still many hidden possibilities such as micromanaging the endangered animals in their habit, habitat restoration, or assisted reproduction just to name a few. An animal’s life should only be confined if its circumstances are so unmanageable that zoos need to take a small step in and take care of the struggling animal(s). Consider being that animal in the zoo that’s told what to do every day of their lives, held in the same place, forced to be with an incompatible mate, and trained to do tricks made for domestic animals. Think of being taken from the infinite blue oceans and moved to artificial pool sized tank. It isn’t “the pampered life” that zoos make it out to be. It is up to humans, who are aware of conditions of zoos behind the scenes, to ensure that the animals that are in captivity or are an endangered species receive the utmost efficient quality, care, and compassion possible.

Are Zoos Internment Camps for Animals. (2016, Mar 07). Retrieved from https://studymoose.com/are-zoos-internment-camps-for-animals-essay 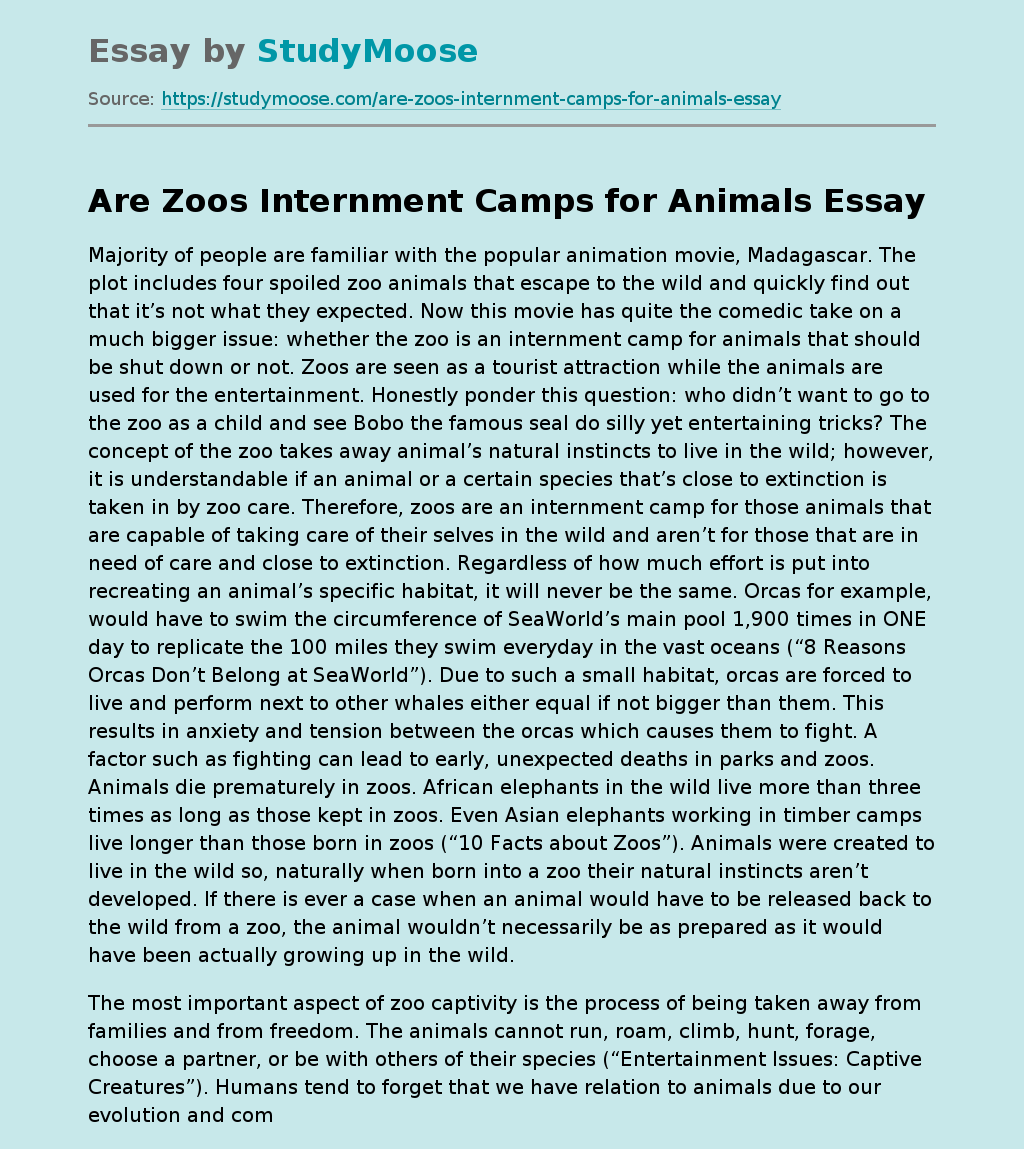