Animals Should Not Be Kept in Zoos

Animals love being in their natural habitat; the wild. Far too many wild animals are kept in zoos being poorly treated and tried to shape into domestic pets. Majority of the enclosures are too small for the animals inside them. So many animals lose their natural instincts and then then if they are returned to the wild for any reason they don’t know how to act or hunt as a wild animal. People say it’s okay to have animals in zoos because it’s educational but it actually isn’t.

Don't use plagiarized sources. Get your custom essay on
“ Animals Should Not Be Kept in Zoos ”
Get custom paper
NEW! smart matching with writer

The animals are not been viewed in their natural habitat and are not acting or behaving as wild animals.

Something needs to be done. Firstly most of the enclosures are way too small for the animals living in them. Yes that’s right. It occurs mostly overseas rather than in Australia but there are captive animals that live in cages with concrete floors and dirty buckets filled with brown water as there only water source for their whole lives.

Occurring mostly in Iraq, Egypt, India, Texas, China and many other countries. Zoo keepers have recognised that some species thrive in captivity while others suffer.

So many animals pace around their enclosures and stop eating showing signs of stress and depression. The average enclosure size for a polar bear is one-millionth of the size of its home in the wild. Some polar bears spend 25% of their days in what scientists call stereotypic pacing. How would you feel if you were stuck inside a tiny enclosure? (Compared to the wild) People staring at you day after day.

That is the life far too many captive animals are living. Secondly animals should not be kept in zoos is because it’s not actually educational.

Zoo animals cannot be viewed as wild animals as they are not in their natural habitat therefor they are not acting in their natural state. One of the main people go to zoos is to learn but it has got to the point where the animals are acting nothing like they would in the wild. If students or tourists want to learn about animals they should visit open range zoos where the animals are free to roam around and act somewhat naturally. Another reason why animals should not be kept in zoos is because they lose their natural instincts.

When the animals are in zoos they are not hunting for their food themselves it is handed to them on a platter. In some zoos in Australia they tie the food high in trees so the animals have to find it and get it themselves but in other countries it is slid through a small door into the animal’s cage. If the animals are ever returned to the wild for some reason they don’t know how to fight or find their own food. When two prairie dogs were returned to the wild they were found two days later, dead from starvation.

The area where they were released was also the home for a heard of buffalo so they did not die from there been no food they died because they didn’t know how to hunt anymore. If zoos are going to release animals back into the wild they need to make sure the animals know how to hunt and fend for themselves first. In conclusion animals in zoos deserve to be out in the wild acting like wild animals and not depressed domestic pets. Something needs to be done about the small enclosures, lack of entertainment to keep the animals occupied and the fact that animals are dyeing when they are finally let back into the wild.

Animals Should Not Be Kept in Zoos. (2016, Nov 11). Retrieved from https://studymoose.com/animals-should-not-be-kept-in-zoos-essay 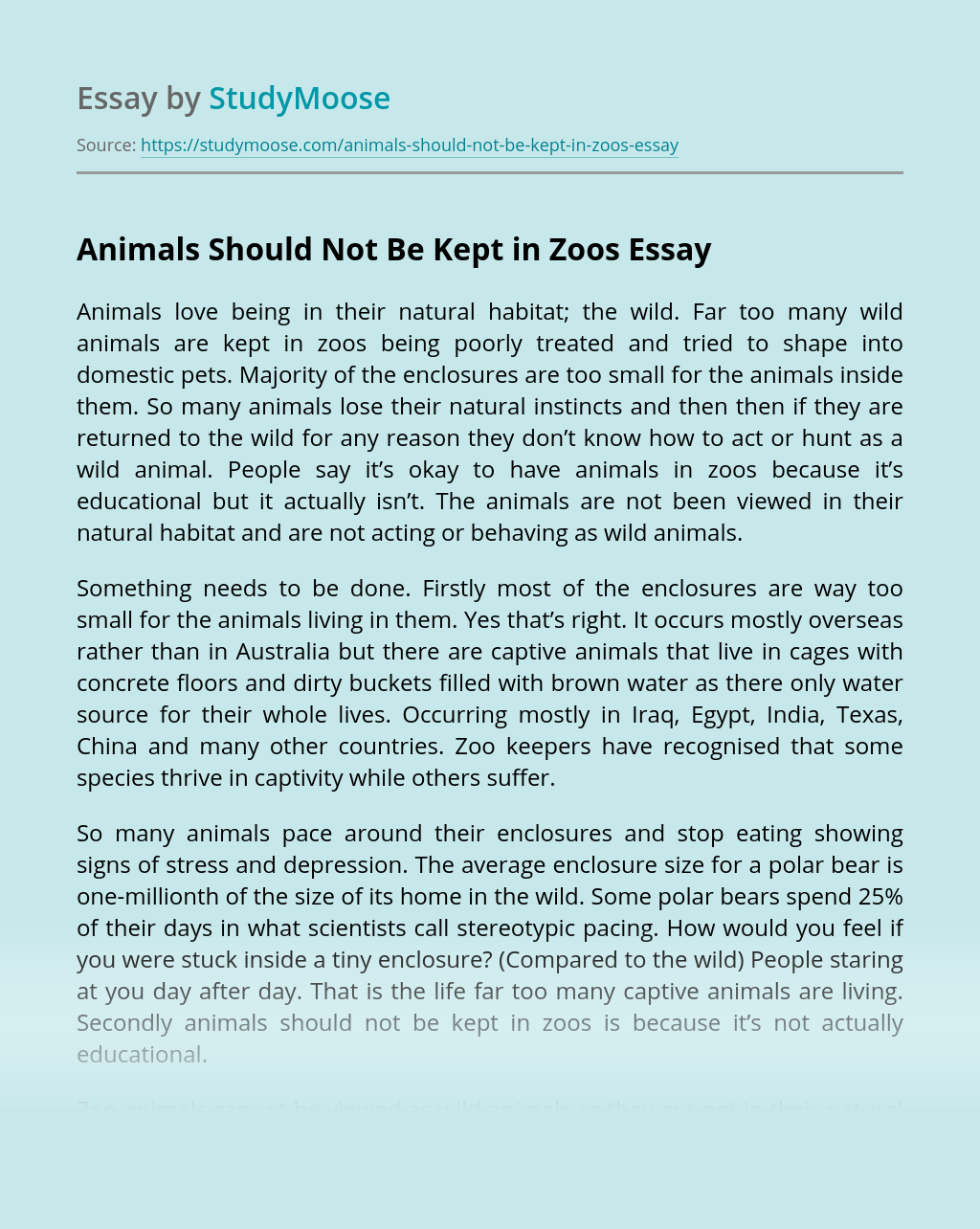