Underage Marriage : Who to Blame?

Marriage should be a couple’s dream,not a nightmare.It is based on a decision you entirely take with an individual you love,or at least that is how it is supposed to be.Love should be the main and only reason of the union of two people who share a real passion and are driven by their emotions.That said,marriage should be based on a free will. However,what if marriage is forced on young,innocent souls who do not even know the notion of life and how to cope with their situations?What if that marriage is destroying those young children and trapping them in a bubble of fear?These marriages take place for several,and irrational reasons that can drive a person to be in a really insane status and feel demented.

Don't use plagiarized sources. Get your custom essay on
“ Underage Marriage : Who to Blame? ”
Get custom paper
NEW! smart matching with writer

In this essay,I am going to present the reasons and the effects of Underage Marriage on young children in Pakistan and India from several perspectives that include : ethical,social,physical,psychological and talk about the mental health of young and powerless children that are being traumatized by this criminal act.

In order to get profited socially,physically and to decrease financial encumbrances,many families in Pakistan and India,are endorsing the marriage of their young innocent children(for both:boys and girls).

Some families think that they save their family honor by marrying their young girls,who are still receiving an education.Some cultures in Pakistan and India believe that if a girl lost her virginity before marriage,she is directly judged as being a source of shame for her family.In the beliefs of the Pakistanian society,engaging in sexual relationships is banned in their culture and demands for serious actions;where the young terrified girl should instantly be protected and covered from the shame that she caused by spoiling her family’s reputation and honor by marrying the man that she slept with or might even be the man that raped her just to make her parents feel proud and not shameful (Tanzeem 2015)!For example,in the story of a fourteen years old girl,named Raeena who lives in Pakistan,Raeena demonstrates that a family’s honor is more linked to girls than boys,for she says:I was worried about my honor”. Due to her mother’s and father’s pressure to marry her off early,Raeena,who is fourteen years old,felt useless and shameful for not getting married at this age,so she got the urge to be with a husband who is twenty-one years old to feel peaceful and proud and not forget the main process here,that is making her parents proud of her,as being a young housewife and stopping her education and pursuing her dreams,just to make a family of her own and so she could bring pleasure to the man that her parents assigned it to her (Tanzeem 2015).As mentioned before,child marriage is common for both sexes: males and females;a recent study by the child advocacy group plan International claims that females in Pakistan marry at a significantly younger age than males,and that is due to their sexual maturation that occurs before boys who usually hit puberty at a later stage (fourteen to fifteen).The number of percentage of girls who marry at a very young age creates a fear for social activists : 60 to 70 percent is recorded for girls getting married in rural areas at the age of twelve (Tanzeem 2015).The main explanation behind this significant increasing number is due to a huge lack of awareness that such parents have.This lack of awareness affects their young,powerless girls more than their boys(Tanzeem 2015).In any case,can Family Honor,be the only reason of such a crime or more underlying, meaningful causes could come across Underage Marriage?

In the following,I am going to discuss what are the reasons that India is dealing with to reach Underage Marriage as a solution for the problems that are manifesting in the Indian society and causing major issues.Poverty and the lack of financial resources,are considered one of the most corporate motives for young children getting married at a very fledgling age.In”Girls not Brides”, a study done by the UNICEF,over the last decade India has witnessed an increased rate of marriage for girls between ages fifteen to eighteen (“Child Marriage Act” 2006).India has the highest number of child brides in the world,where it is estimated that 27 percent of girls in India are married before their 18th birthday,and it goes up to 69 percent in Bihar(“Girls not Brides”).The main factor that causes this very specific high number and makes India rank one of the highest country in child marriages is poverty.Indian parents,see their girls as an economical burden and they feel that they are not able to handle it anymore(“Girls not Brides”).At first,they forbid their girls from continuing their education, and they start training them to be housewives to their husband who expects them to be one. Their parents do not see in them a potential to continue their education;they only look at them as a source for money income. However,taking the right of these poor girls to continue their education,and controlling them and limiting them in a bubble of fear,increase the young girls’ vulnerability and depression that may lead to very stressful and worrying results on their psychological,physical and mental and social health.

“Anonymous Midwives London”( 2017)reported that :”Doctors have warned against girls marrying and having babies under the age of eighteen because they are still developing physically and mentally,and may not be in a position to make informed decisions about their health”.

Girls,at this particular very young age,are not emotionally neither physically ready to be engaged in a sexual relationship or in a lifetime commitment.It is for sure very dangerous for a body during development to get shocked and stimulated by a severe sexual intercourses and specifically when the girl’s body is against it.Plus getting a girl pregnant and forcing her to deliver a baby while she might still be one,face her to very high risks,such as facing the girl to a trauma,a shock and a major depression and an anxiety disorder.Not to forget,in cases where the sex is unprotected and the individuals lack awawerness,HIV/AIDS and many other diseases will occur,and put the physical health of the young girls in real danger(“Girls not Brides”) .

Getting isolated from social groups,friends and family to start creating a new one of your own can be pretty scary and may result in damaging the social identity of the young terrified children.At this age,girls should not,at all,be present at a house,training the perfection of house chores and pleasing their husbands with the best cook,the best food,the best house and the best kids.If they are still discovering themselves,do you think that it is normal to discover and raise a child?I personally think that they might face the newborn and themselves to a very high risk.

Minakshi Manchanda (Indian doctor),a consultant psychiatrist at the Asian Institute of Medical Sciences,says the young women frequently feel exploited: “As minors, they are not prepared for sex and pregnancy, or even for household responsibilities. This often leads to depression”.She adds that:” despite antidepressants and counselling, women can continue to suffer throughout their lives”. (” HYPERLINK ” o “Click to search for more items by this author” Anonymous.Midwives; London”)(2017 ).This depression,often leads to a high rate of suicide where girls see that suicide as the only way to get out of the horrible nightmare that they got stuck in it.Can we live with ourselves knowing that by sitting and doing nothing,we are burning the souls and the amibition of millions and millions of girls?

Human Rights attorney Zia Ahmed Awan says that:”the underage marriages and forced conversions  are blemish on the face of our society and all stakeholders including government need to take serious steps to end the menace,adding this sensitive issue mostly affects children and young people,it is also a grave violation of rights”.(“Pakistan Press International; Karachi”)(2017).He also held a press conference with the parents of a victim and emphasized that,if we want a change,we should start seeking it and work hard for it,and most importantly,is to start with campaigns and activities throughout which we are able to raise awareness for both parties:the parents and the victim.For example,”the national child protection authority in Sri Lanka has decided to cancel 300 marriages until the children reach the minimum limit age which is eighteen”(“Daily Mirror Colombo”).A lot of NGO’s have started to act to limit this problem and more specifically,they started to attack directly the main sources and origins that were causing Underage marriages to happen.Effective work has been conducted in order to limit poverty,raise awareness to parents who lack basic and minimal knowledge,creating more and more public schools for girls to continue their education for free;in addition to fundraising events to collect money to supply the young girls with the material that they need for their education(“Girls not brides”).

We ought to trespass geographical frontiers and look beyond our set of boundaries to a world that is the most critical need of help,guidance and actions.It is about time to put an end to child marriage,and give every girl around the globe her right,that she shares with every child to enjoy her childhood whilst having a decent education or even doing whatever she finds the most satisfying for her own good.Girls not brides.Education not marriage.It is our duty to protect our children by the laws and the constitution which prohibits the law of the jungle of taking over in our societies.

Underage Marriage : Who to Blame?. (2019, Dec 08). Retrieved from https://studymoose.com/underage-marriage-who-to-blame-essay 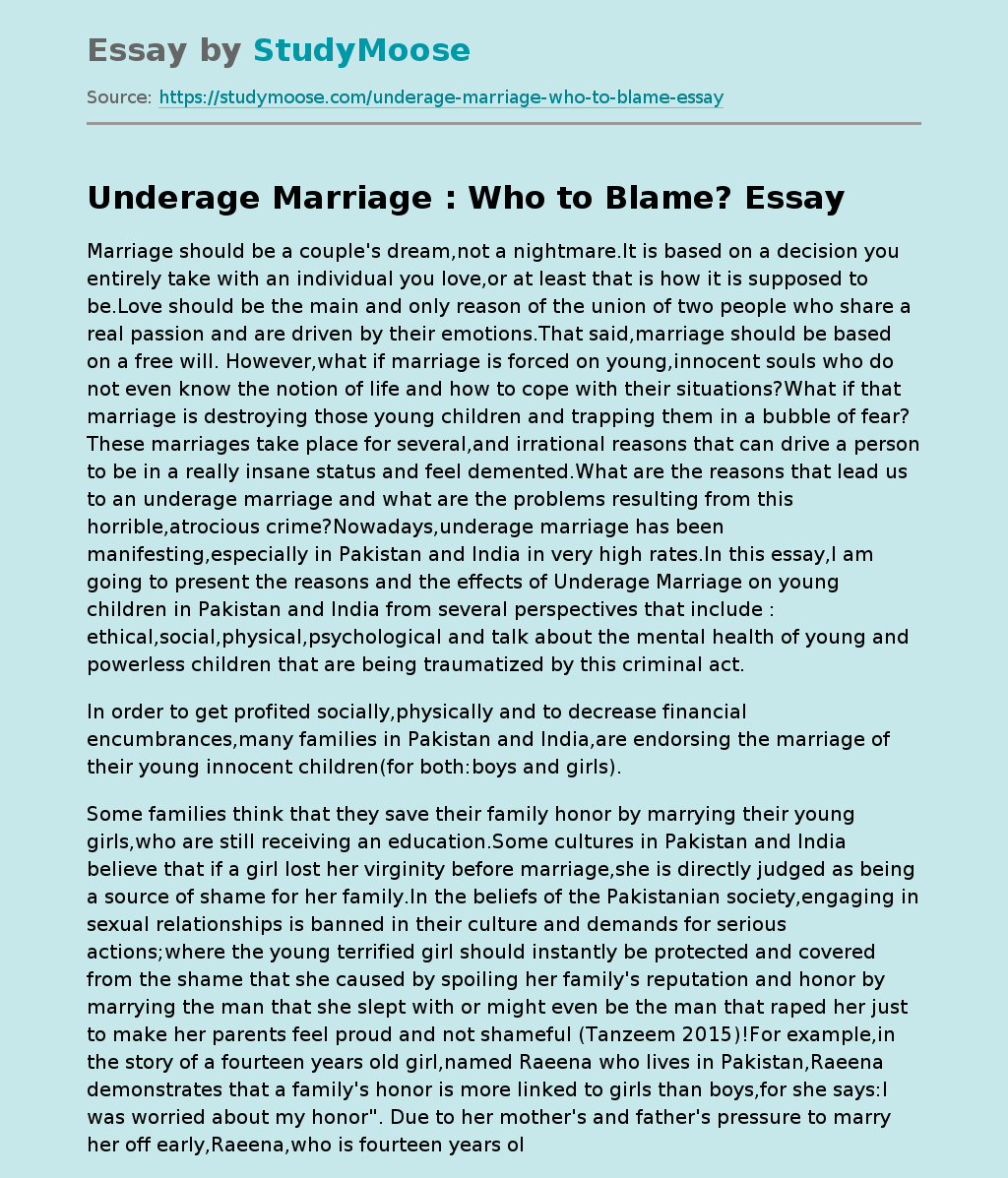