The most basic current issue report is divided into four areas:

The Legislative Council of the HKSAR government has just proposed the new regulations on lowering the legal drinking age to 16 years old, with the growing requests from the teenagers aged below 18, who claim the “definition of maturity” in the current modern society is now changed.

Don't use plagiarized sources. Get your custom essay on
“ Underage Drinking Report Format and Sample ”
Get custom paper
NEW! smart matching with writer

The current, legal drinking age in Hong Kong, as well as for most of the rest of the world is 18. Many people consider this unrealistic. However, unconditionally lowering such age would put our own children at high risk on such new legal platform.

Problems arisen from passing such regulation unconditionally, possible solutions and recommendations would be discussed in the report.

Problems of passing this proposal unconditionally

Under the age of 18, teenagers have not yet developed the cognitive, social or psychological mechanisms that one needs in order to make logical, responsible and thoughtful decisions about matters requiring insight and judgment. They have not yet completed the physical maturing process which is vital to the human development. The intake of heavy alcohol under these conditions can cause lifelong deficits.

It has been scientifically proven that heavy alcohol dulls anyone’s ability to make a thoughtful decision. Furthermore, alcohol can be a drug that works directly on the central nervous system. It affects mood and behaviour and has many side effects, especially on young people. The legal drinking age exists exactly in order to protect under-eighteens from such damages.

Heavy alcohol has many side-effects which can be influential for the rest of our lives. It has physical as well as psychological effects. The physical effects include immature organs being poisoned by alcohol or the heart to stop beating, as well as hypothermia, coma from too little sugar, injuries, or even fatal accidents. Alcohol abuse amongst teens is responsible for at least five thousand deaths yearly. The use of alcohol amongst teenagers also has psychological effects such as an increase of aggression, decreased interest in academic success and a high risk in sexual behaviour which could possibly lead to AIDS or other STI’s. It can also cause the distancing of teens from their parents. Heavy alcohol is often considered a ‘gateway’ drug to other, even more damaging drugs. Possible solutions

With growing requests on lowering the legal drinking age from the teenagers aged under 18, the government can consider regulating the use of certain low-percentage alcohols such as beer, wine or champagne for teenagers from the age of 16 is allowed, with such light alcohols sold only by the government legally-authorized selling centers. This can be a solution as a gradual approach to the use of alcohol which nowadays, is socially accepted. Recommendations

The legal drinking age of 18 years is absolutely appropriate and should not be lowered to 16 unconditionally. It truly protects teenagers from the effects that the abuse of alcohol can have, which they are not yet capable of understanding. In addition to maintaining the current legal drinking age, teenagers must be educated about the physical and psychological effects that alcohol can have on them, by their parents, as well as their teachers. 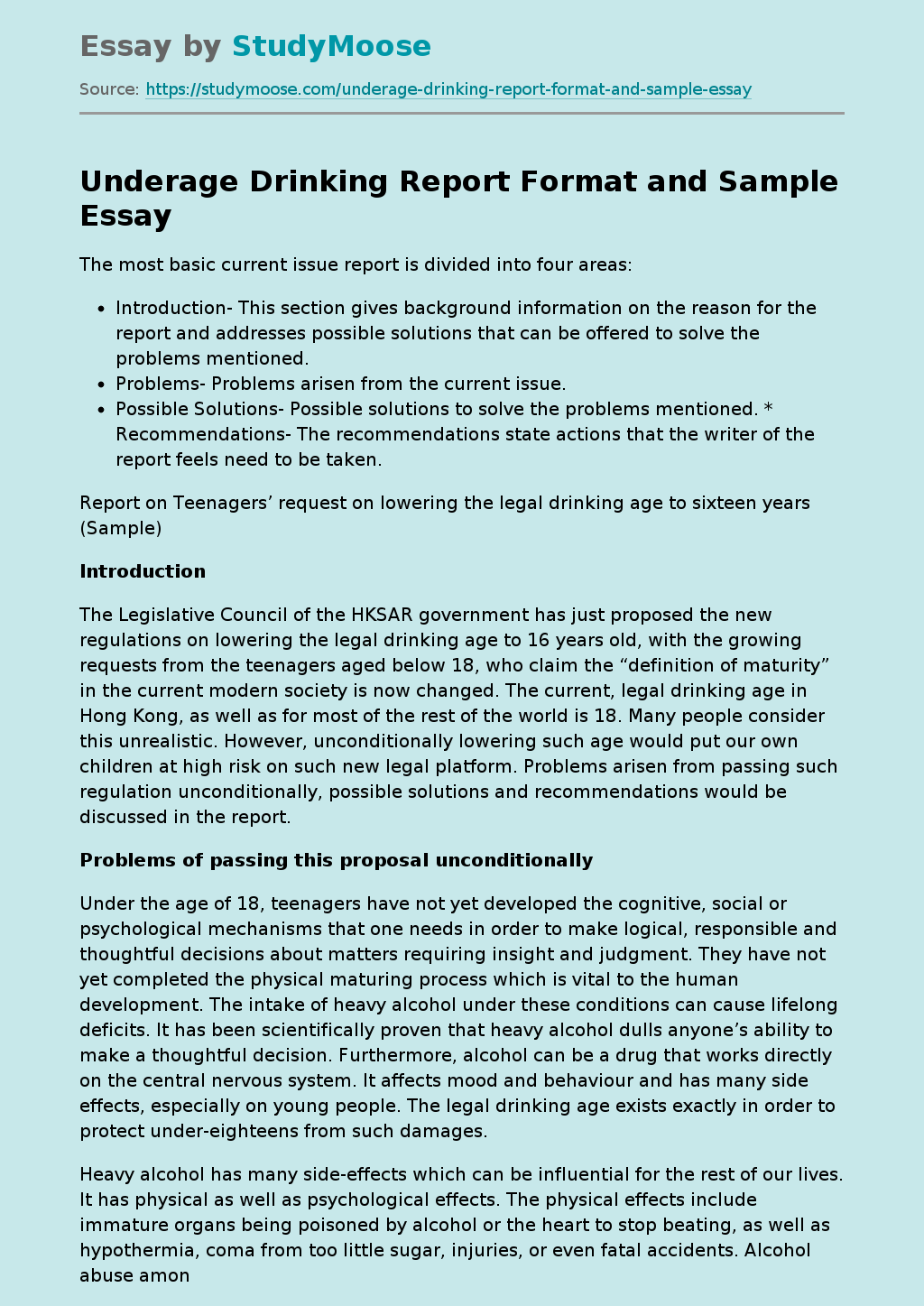