To What Extent Does Williams Portray Stanley as the Cause for Blanche’s Downfall?

A Street Car Named Desire is a play written by a Mississippi born writer called Tennessee Williams. A Street Car Named Desire shows a reversal of fortune with Blanche having a life full of fortune with a successful business and a happy marriage however it is all turned upside when all this fortune is removed out of her life resulting in her seeking refuge with a lower class family her sister got married into… this fits in with Aristotle’s theory of tragedy because there is a reversal of fortune, bringing out feelings of fright and sympathy to the audience.

Don't use plagiarized sources. Get your custom essay on
“ To What Extent Does Williams Portray Stanley as the Cause for Blanche’s Downfall? ”
Get custom paper
NEW! smart matching with writer

Blanche might have been a character created by Williams using inspiration of his own life, William’s sister was suffering from schizophrenia all of her life and Williams spent most his life paying for her care. Blanche went into care at the end of Street Car Named Desire. Blanche might have been based on Rose as some critics believe. In this essay I will argue who is responsible for Blanche’s downfall and to what extent Williams portrays Stanley to be the cause, because of his possessive character and pride.

Stanley’s victimisation of Blanche and not allowing her to hide away in the shadows was another contributing factor towards Blanche’s downfall. However I will also explore how it can be argued that in fact it was inevitable that Blanche will have a downfall, as she went to stay down her newly married sister’s house… desperate for help as the family business was ruined.

As a cause Blanche became promiscuous after her husband died after her shock of finding out his homosexuality.

She is a character all about the luxuries of life, she is running away from her past and does not want to face reality that she does not have the fortune she once had. So was Blanche her own worst enemy or was it down to Stanley? At the start of the play, Williams portrayed Blanche as a sophisticated woman who was from a higher class than the citizens in New Orleans were her sister lived. Yet she was penniless and lonely, however it was just a front as she confesses; ‘I was so exhausted by all I’d been through my- nerves broke. ’

Williams showed that Blanche was nervous by her always ‘Drinking quickly’ nd often this shows that Blanche was already breaking down and it was just a matter of time before she would completely have a downfall regardless of her brother-in-laws presence. Blanche was trying to hide away from what she actually was and held on to the thought that was still a young attractive desirable woman with many luxuries. She was fooling herself; this is a weakness in her character which Williams created. Williams created Blanche as a character that lost her family business and death of her husband therefore became very promiscuous with a lot of desire for attention, sex, money and love.

She contributes to her own downfall after she does not get enough desire as she wants, she moves on tarnishing her reputation along the way… Blanche was even fired as an English teacher for having an affair with a 17 year old student. She depends on men although she says to Stella that Stanley is not good for her happiness; however she thinks that men will lead to her recovery like contacting Shep Huntleigh for financial help however this means that her fate is in the hands of others. All these lead to slowly breaching her emotional strength which arguably leads to her downfall.

Blanche made all the wrong choices after all of these misfortunes, she was not a victim she chose the wrong path after every situation which made her downfall inevitable. Blanche tries to change the way Stella and Stanley lived by decorating their house and re-arranging the furniture. This gets in the way of Stanley’s lifestyle which would be to be alone with Stella for his own desires. Therefore it can be argued Blanche was causing more trouble for herself because she even openly flirted with Stanley by spraying him with her own perfume to get him to like her.

He took this act in a flirtatious way to which he said; ‘If I didn’t know you was my wife’s sister, I’d get ideas about you. ’ This shows that Blanche is a manipulative character which could have been a contributing factor to her downfall. Blanche always wore white clothes which Williams might have purposefully done this to show her desire to be pure, to cleanse herself of her past. It seems that Williams has made it seem that Stanley did not cause Blanches downfall to much extent that he only sped up Blanche’s decline as she was already on a decline, regardless of Stanley’s added affects.

However it can be argued that although Blanche was on the verge of a downfall she would have recovered as she had the strength to go to her sister for help. Yet it can be said that Stanley stopped Blanche recovering and aided her downfall to continue. Williams shaped Stanley’s character as a dominant, prideful and somewhat possessive one… I believe that he is mainly sexually possessive as once Blanche questioned Stella on why she loves Stanley she admitted that it was because, he fulfils her sexual and sensual desires with a steady life.

‘Remember what Huey Long said-`Every Man is a King! And I am the king around here, so don’t forget it! ’ Stanley was the dominant character between him and Stella however, with the arrival of Blanche Williams disrupts their simple life; Blanche criticizes his private life his character, his views and beliefs. Therefore Stanley turns against her this could be argued the cause for Stanley to start breaking her down, wanting her to have a downfall in order to have victory in a battle of power.

Blanche was left alone once more as even Stella did not stick up for her when Stanley defended himself saying; ‘Pig-Polack-disgusting- vulgar-greasy! -them kind of words have been on your tongue and your sister’s been too much around here! What do you two think you are? A pair of queens. ’ Blanche was trying to run away from her past by moving away and lying about her past to her sister and Mitch her love interest. Stanley targets Blanche, the first time she is actually like a victim. Stanley finds out about her promiscuous past and exposes her ruining her future with love interest Mitch whom she wanted to marry and reputation with her sister.

She was forced to face reality and she could not handle this leading her to go insane this was portrayed by Williams by making Blanche talk about a man named Shep Huntleigh, who will take her away on a luxurious trip. She was admitted in a mental institute. Stanley miss-interprets Blanche’s flirty signs from the very beginning of the play, from when she sprayed her perfume on him he thought they had a connection as he raped Blanche while his wife was in labour, this defeated Blanche in their battle of domination… We’ve had this date since the beginning. ’ This quote shows that it was inevitable that there would be a violent end, in his defence it shows that he only acted upon his instincts and did not understand Blanches signs… he did not think of the consequences because of the person he is and does not have the motive of destroying Blanche’s mental state by raping her. Yet on the other hand it could be interpreted that Stanley wanted to use her since the start for interrupting his private life and criticising it.

Overall I think that Blanche is to blame for her own downfall however not wholly, as I think Stanley aided her on her way and brought her past back on her to ruin any chances of Mitch getting married to her or living a comfortable life after lying to him, his wife and friends of her past. Blanche was mysterious and always in the shadows, covering lamps with paper shades, Williams used this to express that she was hiding herself from the spot light, into which she was forced into by Stanley.

She does not fit into New Orleans she’s treated like an outsider by Stanley however the cause for her downfall is herself. Blanche was in control of her own decisions; she chose all the wrong ones which left her vulnerable to more tests and problems. She did not know how to deal with her problems herself instead she looked for love and depended on men to help her, she became promiscuous ruining her chances of finding any respect and husband.

Blanche could have avoided a downfall if she stayed head strong and been able to control her sexual desires for younger men. She used her beauty to get what she wanted but this beauty began to fade leaving her with a broken weapon set. Williams showed that Stanley is a vicious man who will not tolerate anyone trying to takeover his powerful position in the family and he showed this to Blanche, which caused her downfall, however it is clear that Blanche would have had a downfall at some stage anyway, Stanley was like a catalyst in her downfall.

To What Extent Does Williams Portray Stanley as the Cause for Blanche’s Downfall?. (2017, Jan 15). Retrieved from https://studymoose.com/to-what-extent-does-williams-portray-stanley-as-the-cause-for-blanches-downfall-essay 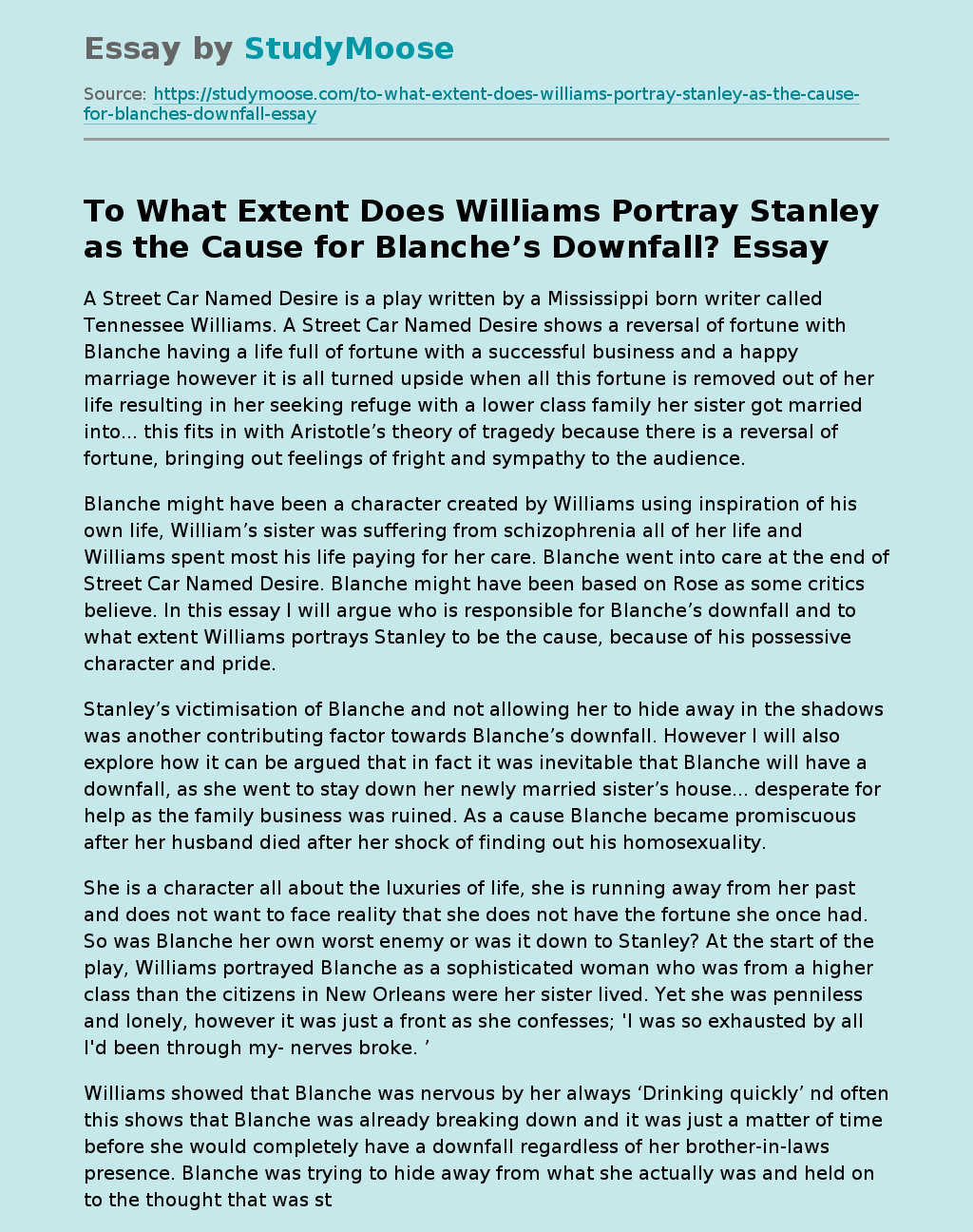