“What are your early perceptions of Blanche? ” In what ways has Tennessee Williams created this response? The delineation of Blanche Dubois as seen in the first chapter of Tennessee Williams ‘A Streetcar Named Desire’ is one of astonishment and acceptance. She has obviously had to travel some distance to reach her destination and I think that this has taken its toll on Blanche and affects her patience later on in the scene, and which may also explain her growing hysteria.

The first time the Blanche is depicted by the stage directions, the reader (or view of the play) obviously notices that she does not fit in with the poor, run down area of New Orleans that she had entered: “Her expression is one of shocked disbelief… looking as if she were arriving at a summer tea or cocktail party in the garden district… Her delicate beauty must avoid a strong light.

Don't use plagiarized sources. Get your custom essay on
“ First Perceptions of Blanche Dubois ”
Get custom paper
NEW! smart matching with writer

There is something about her uncertain manner, as well as her white clothes, that suggests a moth”

From this description, we can infer that, like a moth that is attracted to the light or flame, which will undoubtedly burn it, she too could be attracted to something that could hurt her in some way.

The white that she is wearing also suggests purity and innocence, possibly reflecting her arrival to the alien world. Throughout the first scene, Blanche is constantly interacting with the different characters of the play, including Eunice, Stella and Stanley.

She also only talks to these characters singularly, which allows for dramatic irony to develop and also concentrates the interaction between her and another character, which allows her to express her different views to the three characters in the opening scene.

I think this allows Blanche to communicate different aspects of her character, and her social class, which seems to alter the way she communicates with the different characters she encounters.

Blanche talks to Eunice as if she has not spoken to someone of Eunice’s class very often. She responds to Eunice with short and simple answers and does not seem to want to get into a conversation with her. Towards the end of their conversation, Blanche seems to get impatient, as she wants to be left alone and has a small outburst: “What I meant was I’d like to be left alone”. I think this reflects Blanche’ belief of her social class, and that she is above others (especially the black, lower class).

After her encounter with Eunice, Blanche is given a short amount of time to reflect on her new surroundings, which she is obviously not comfortable with or use to by her statement to herself: “I’ve got to keep hold of myself”. This shows the tension and hysteria building up within her, which will later on be released. Blanche is much more open and talkative with her sister, and is thrilled to see her, although disappointed to see that Stella is living in such an area of New Orleans.

There seems to be tension between the two sisters, created by their uneasiness of how they talk of their past and the anxious, tension building stares that they give each other, and the way that Blanche seems to control the conversation; trying to keep herself talking until she has to stop and realize the reality of her situation and where she is. Blanche also seems to be very defensive of herself, and talks of her pain of watching the people around her die in her own home.

She seems to think that Stella may look down on her for losing Bell Reve, and becomes hysterical towards the end, until she reaches another climax and bursts out with: “I let the place go? Where were you? In bed with your – Polak! ” . Blanche also seems concerned with her own self image: “But don’t look at me, Stella, no, no, no, not till I’ve bathed and rested! “. I think that this also is due to her class and her belief that she is of a higher social status than the people around her (with the possible exception of her sister). Her other weakness seems to be her drinking.

She nervously looks around in Stella’s and Stanley’s flat for some alcohol and has some, but later on says (indirectly) that she had not had one and that she would only drink one a day. I think this may show Blanche’ nervousness and what she may do when she is nervous. She therefore may use alcohol as an escape from reality, and the place, which she finds herself in. Blanche seems a bit uneasy around Stanley when they first encounter, and is much less talkative than she is to Stella (possibly, again due to her social class beliefs).

Also, I think she is not used to people being so direct with her, as Stanley asks her a personal question to do with her last love quite early. This ends in a climax and her proclaiming: “I’m afraid ‘m going to be sick”. Looking at the scene as a whole, I can see that Blanche is not use to her new environment, and that she is finding it difficult to get used to her settings, possibly because she was caught completely by surprise when she discovered where her sister lived. This I think has took its toll on Blanche as it has weakened her throughout the first scene and made her slightly hysterical. 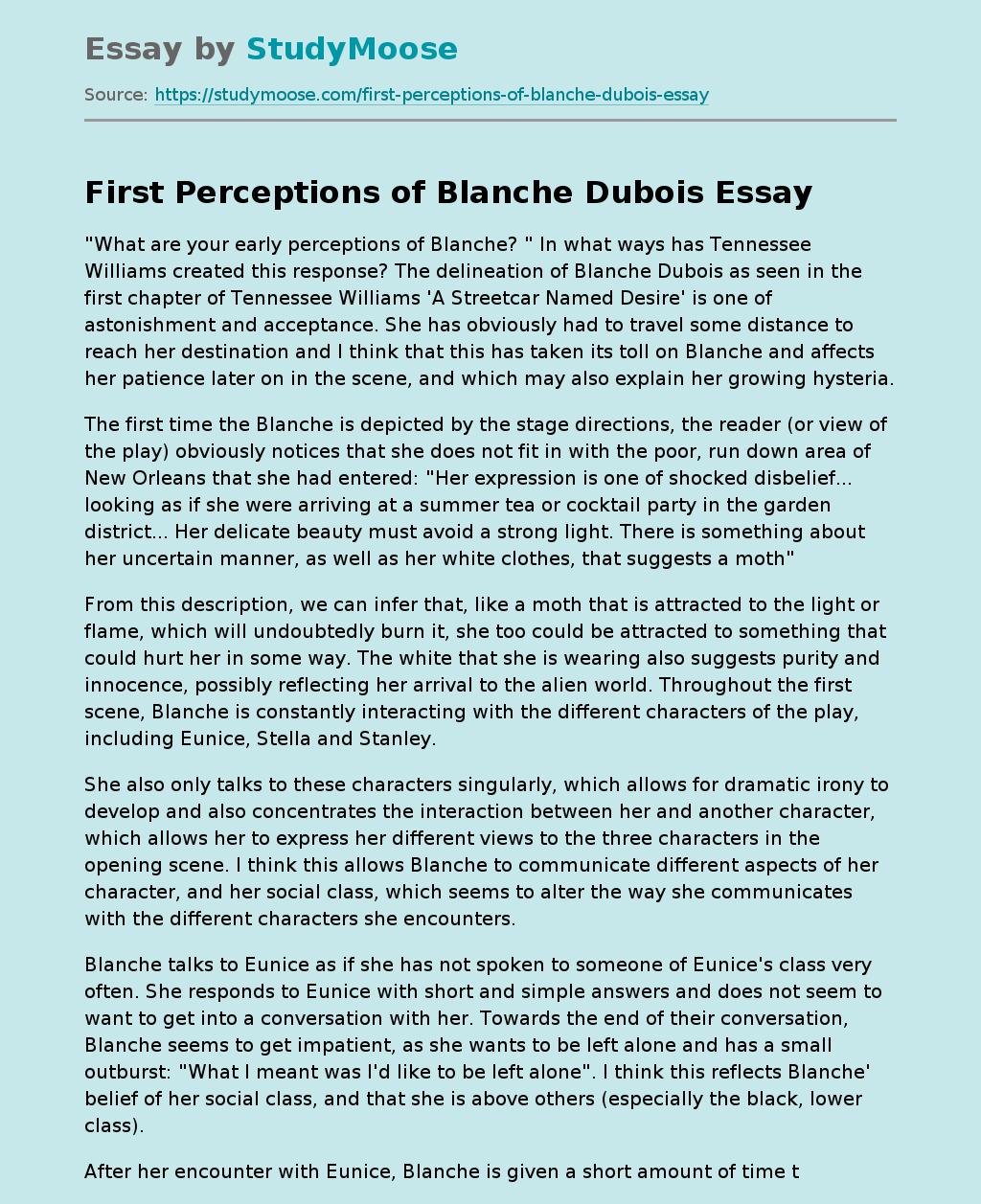