How far does Blanche Dubois measure up to the status of tragic heroine?

Looking at the definition of hero, we see that in mythology and legend, a man, often of divine ancestry, who is endowed with great courage and strength, celebrated for his bold exploits, and favoured by the gods. A person noted for feats of courage or nobility of purpose, especially one who has risked or sacrificed his or her life: soldiers and nurses who were heroes in an unpopular war.

Don't use plagiarized sources. Get your custom essay on
“ Blanche Dubois As Tragic Heroine ”
Get custom paper
NEW! smart matching with writer

A person noted for special achievement in a particular field. The principal character in a novel, poem, or dramatic presentation.

Blanche Dubois can be seen as a tragic heroine within ‘A Streetcar Named Desire’ on a number of occasions. In the opening scene of the play, Blanche is introduced as someone who seems to be very sensitive and in some ways innocent, we see this when Williams writes:

‘She is daintily dressed in a white suit…looking as if she were arriving at a summer tea or cocktail party.

Both her sensitivity and appearance are an obvious contrast to not only Stanley, but his apartment also, where Blanche ironically chooses to stay. Within Streetcar, Blanche’s life is evidence of how a single, tragic event can, in effect, end someone’s life. In Blanche’s case, this tragic event is her fall into complete incapability to cope with real life situations and failure to remove herself from the fantasy world she has created for herself. This can be seen as one of Blanche’s main tragic flaws, that is the error of a tragic hero that in time leads to the hero’s defeat, such as Macbeth’s success to the throne, yet his actions that brought him there eventually causes his death.

In an effort to escape the misery of her life in Laurel, Blanche drinks heavily and has meaningless affairs. She needs alcohol to stop the polka music which symbolises Allan’s death, from repeating in her head and to avoid the truth of her life. She gives herself to various strangers in an attempt to lose herself. She seduces young boys in memory of Allan. But her empty heart finds no peace, and her bad reputation ends her teaching career.

Blanche cannot stand a vulgar remark, a loud noise, or a harsh light. With Allan’s departure, the light seems to have gone out of her life. As a result, she prefers darkness and dim candlelight, the perfect setting for her make-believe world that has no pain or memories. It also hides the reality of her departed youth and advancing age, which is yet another flaw that she has, her obsession about not getting old because then no man will want her.

Blanche’s dim perception with real life feelings and situations can first be seen when she discusses her past husband. She believed that her marriage to Allan was genuine, however refused to acknowledge his sensitive and effeminate qualities, perhaps in fear of the consequences. This is evident as we see here:

‘There was something different about the boy, a nervousness, a softness and tenderness which wasn’t like a man’s…’

At the age of sixteen, she fell in love with, worshipped, and eloped with a sensitive boy. She believed that life with Allan was sheer bliss, however her faith is shattered when she discovers he is a bi-sexual degenerate, her discovery of this lead Allan to take his own life. Blanche is seen to hold herself responsible for his untimely death due to the way she spoke to him after discovering his secret. She is full of enough remorse that the thought of Allan alone is enough to make Blanche vomit, as can be seen in Scene 1 when Stanley asks her about her past marriage:

Blanch is in no way perfect, the audience is made to feel sorry for her at times, and to hate her at other times, but despite the fact that another of her main flaws is her ability to deal with situations like an adult, the tragic event leading Blanche to her fantasy world and on occasion depression, is the death of Allan. This sets off Blanche’s downfall into what could be diagnosed as insanity, as it is the loneliness and and the fact that she feels her life doesn’t have a purpose without a man, she experiences after Allan’s death that forces her to seek attention in the wrong way and from the wrong company. Such as the flamingo hotel, which is a good example of her dealing with a bad situation badly. 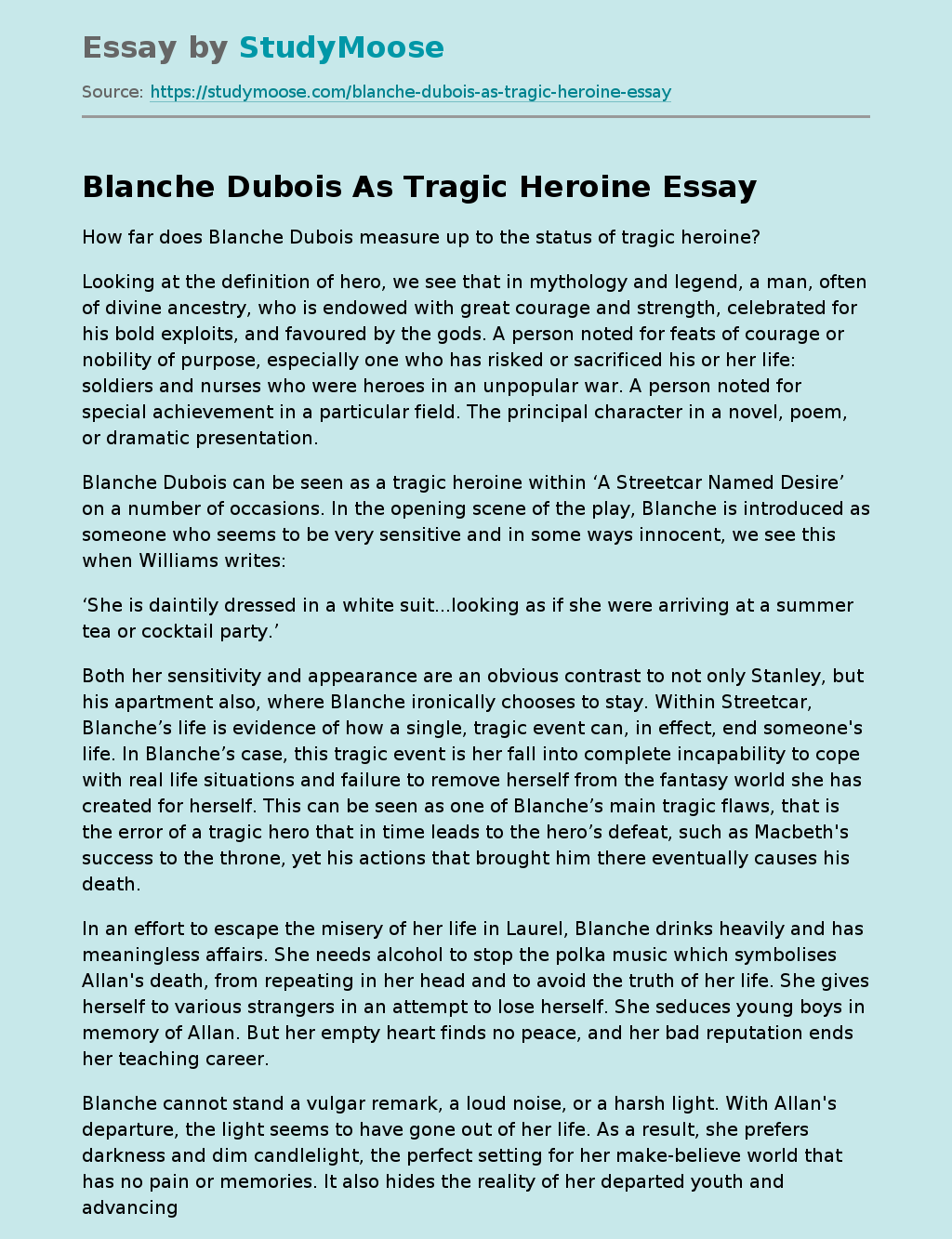