Truth is the only weapon which can make a person win a battle. It is a pen that can write anything without anyone’s terror; it is a game in which who follows its one golden rule can never lose it; it is a tree that never loses its leaves; it is a river that cannot get filthy and dry in any season. Overall it can create heaven or else if not followed properly can ruin the whole world. It is said that to hide one lie we have to speak hundred more lies and that’s true.

Don't use plagiarized sources. Get your custom essay on
“ Truth is bitter better ”
Get custom paper
NEW! smart matching with writer

A lie spoken intentionally means we need to speak several more lies to cover up that lie. And then also the truth comes out itself automatically.

Everything has two sides, positive as well as negative. A coin has positive side of triumph and negative side of disaster also. If a person wins then he may also lose someday. If happiness is there then sadness is obvious.

If a tree bear leaves then it also shed them. If one can stand then one can also fall. Taken as a whole, one can get to face anything in this whole world. Gandhiji said: ‘Lying is the mother of violence. ‘ And it is true. In our daily life, as an instance, we meet our relatives and if they hide anything from us by telling anything which is not true and later we come to know then we turn violent and more aggressive.

It leads to disrespect to the person.

Truth was the only mother, father, son, daughter of the most widely known leader of the world- Gandhiji. He believed in truthfulness and he promoted its principle. And also it was obvious that for this single reason he was known worldwide. With this extraordinary weapon, he threw out the brutal and atrocious Britishers out of our country. He believed in the principle of Satyagraha which proved to be the most influential and imperative movement of the period. Gandhiji said:-

‘I have nothing new to teach the world. ‘ Truth and non- violence are as old as the hills. ‘ And this is true as truth and lie are not the new concepts that the world has. It is as old as even more then hills and mountains. No one can teach the world the art of speaking truth and plus of the lies. They come out from within our heart. According to me, Nelson Mandela can also undertaken as a person who followed truth and won the whole world the price of peace, equality and oneness. He being a ‘black’ became the president of ANC (African National Congress) and also he won the Nobel Prize for his greatest achievement.

He promoted equality among all the people on his principle that everyone is equal in the eyes of God. He was true in his outline as everyone is equal and equality in itself is also a truth. Also an example from our daily life, we are becoming more scientific these days but there are many people who still believe in superstitions. There are many misleading people who in the name of God hypnotize people in such a way that neither anyone comes to know about such thing nor the hypnotized is able to tell. But this is a bitter truth that those who follow anyone blindly have to face problems later in life.

Even the person doing such illegal and superfluous acts are always caught and they can’t make fool of people for long. A recent example is of the person who was called as guruji in Punjab- Sarasa. He was popularly known all around the world. He had separated salokas which had very less verses praising God and more of praising himself. But the problem was that whatever he was doing was wrong, whatever he was saying was lie, whatever acts he was committing were illegal! And surprisingly a member from his own crew told the media that something was wrong going on at his place.

Shockingly he used not to allow any of his disciple to talk to anyone because if they would do so then by chance if anyone else would hear it, then his acts would be held naked in the world and now this has happened, his popularity is decreasing also he is being disliked by the people now. This has not been the case in the present world but also during satyug (according to Hindu mythology) when Lord Rama were existing. He killed Ravana and placed truth over evil. He was cruel and so he did not win this battle of truth and evilness in spite of being so knowledgeable. This shows that truth wins and lies or evil faces disaster and fails.

But this is a fact that this yug is kalyug and in this yug is lies or evilness is given the same importance as it is given to truth. They are considered one and the same. For example in the case of Jessica Lal, it was first being kept aside and with false statements it was tried to conclude. False statements and evil methods were adopted to sole this matter quickly and quietly. But unfortunately this could not happen. Truth may be kept behind for years and years but one day itself it would come up and the liar will have to face problem for his mistake.

At last I would like to conclude that whatever be the case whether this or that we must not leave the path of truthfulness as this is the only way that would lead us to place which is as beautiful as heaven and the other way would lead us to a place like hell. It depends on us which way we opt. Finally by analysis of the history and of the present world we come to know that we cannot hide truth for long and cannot follow fakeness for long. Thus, truths always triumph! Satya Meva Jayati! As we say that ‘slow and steady wins the race’ we can say that ‘Truthful and honest wins the race. ‘ 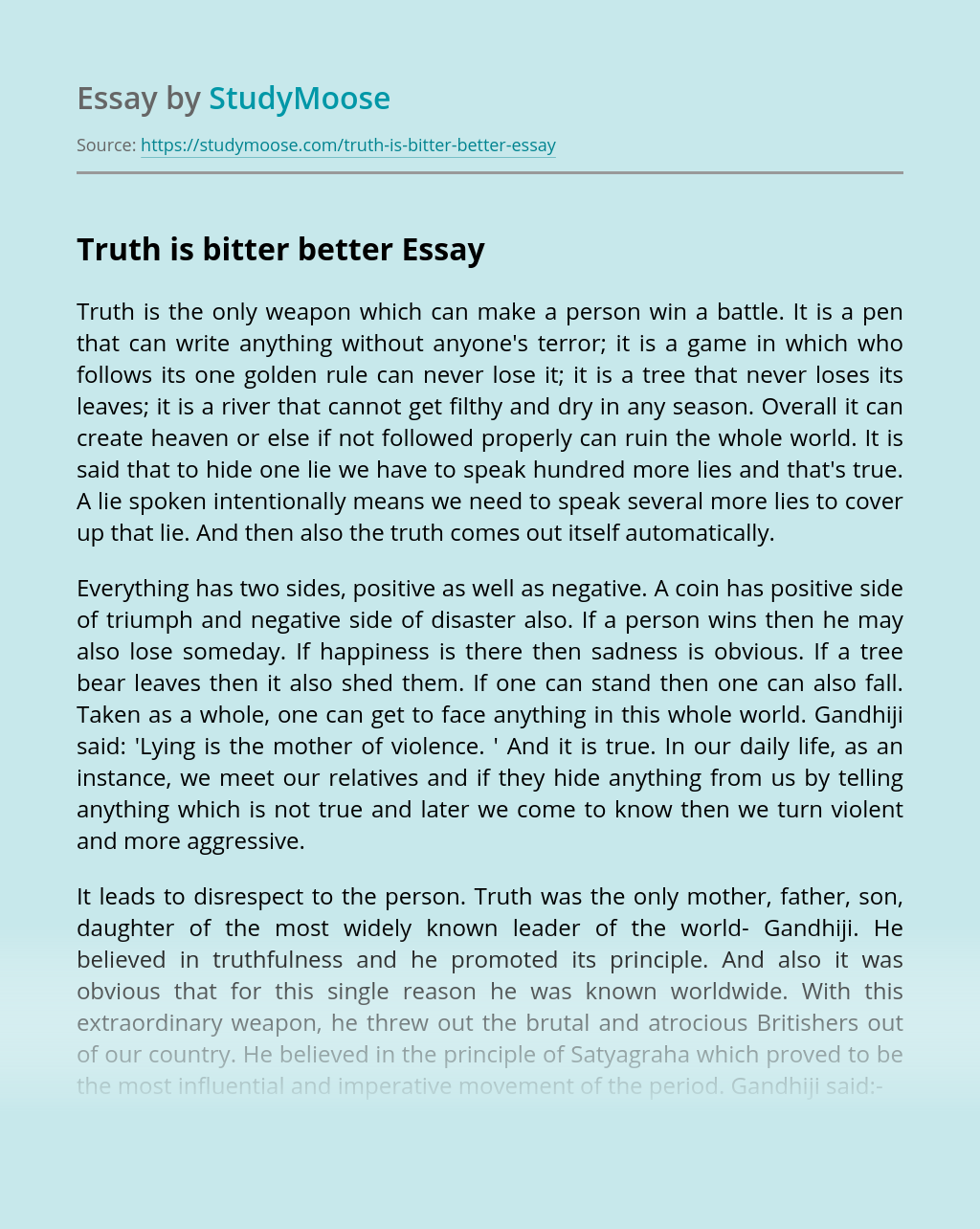