Microsoft has monopoly in PC operating systems, Windows operating systems which are used` in more than 80% of Intel based PC’s. This market has high technological barriers. Threat to Microsoft is not from new operating systems but from alternate products such as browsers, which are new softwares that can be used with multiple operating systems and can also act as an alternative platform to which applications can be written. This posed a threat to Windows monopoly and perhaps its long-term existence.

Don't use plagiarized sources. Get your custom essay on
“ Case Study Economics – Microsoft and Monopoly ”
Get custom paper
NEW! smart matching with writer

Initially Microsoft had tried to subdue competition by asking for explicit market sharing agreements with competitors (such as Netscape). A failure to do so, allegedly, led Microsoft to adopt anti-competitive strategies. This led to a set of consolidated civil actions against Microsoft in 1994 by the United States Department of Justice (DOJ) and twenty U.S. states. DoJ alleged that Microsoft abused monopoly power in its handling of operating system sales and web browser sales.

The issue central to the case was whether Microsoft was allowed to bundle its flagship Internet Explorer (IE) web browser software with its Microsoft Windows operating system.

Bundling them together is alleged to have been responsible for Microsoft’s victory in the browser wars (specifically Netscape) as every Windows user was forced to have a copy of Internet Explorer. It was further alleged that this unfairly restricted the market for competing web browsers (such as Netscape Navigator or Opera) that were slow to download over a modem or had to be purchased at a store.

Underlying these disputes were questions over Microsoft’s allegedly anti-competitive strategies – to impose high entry barriers – including forming restrictive licensing agreements with OEM computer manufacturers, entering into exclusionary agreements with ICPs and ISPs, altering its application programming interfaces (APIs) to favor Internet Explorer over third party web browsers, restricting alterations to its boot up sequence and active desktop, and above all Microsoft’s intent in its course of conduct .i.e. to kill competition by any means and deprive consumers of product choice, especially in browsers, by discouraging innovation.

1. Microsoft invested money to develop, test and promote IE for free to all users. In competition to Netscape browsers which was being sold for a price. They even paid some customers to use IE instead of Netscape browser.

2. Microsoft put a condition to PC manufacturers to license, preinstall and distributes IE on every Window PC. By this, they were able to distribute IE on every PC by tying up IE to Windows 95, which was a monopoly version.

3. This was extended to the Windows 98, successor of Window 95, misusing their operating system monopoly to exclude competition and deprive customer of free choices. They made removal of IE from Windows 98 technically more difficult.

4. Microsoft restricted all OEM’s to remove any part of IE software or to add any other browser in the pc in a more prominent or visible way. So OEM’s are deprived of the choices they can make about which browser should be offered to customer.

5. Microsoft entered with anti competitive agreement with all largest and most popular ISP’s and OSP’s. It gave the list of ISP’s in folders with OS that enabled users to subscribe to their services and substantial value to ISP’s.

6. Microsoft entered anti competitive agreement with ICP’s to not pat or compensate his competitors for the distribution, marketing or promotion of the ICPs’ content, to not promote any other to inhibit competition.

Microsoft stated that the merging of Microsoft Windows and Internet Explorer was the result of innovation and competition, that the two were now the same product and were inextricably linked together. Also, the consumers were now getting all the benefits of Internet Explorer for free. Those who opposed Microsoft’s position countered that the browser was still a distinct and separate product which did not need to be tied to the operating system, since a separate version of Internet Explorer was available for Mac OS. They also asserted that IE was not really free because its development and marketing costs may have kept the price of Windows higher than it might otherwise have been. The case was tried before U.S. District Court Judge Thomas Penfield Jackson.

While the initial verdict went against Microsoft, the verdict was overturned on appeal. Nonetheless, EU recently found Microsoft guilty of anti-trust conduct and slapped a fine of US$1.3 billion in 2008, the largest fine ever imposed on a company. 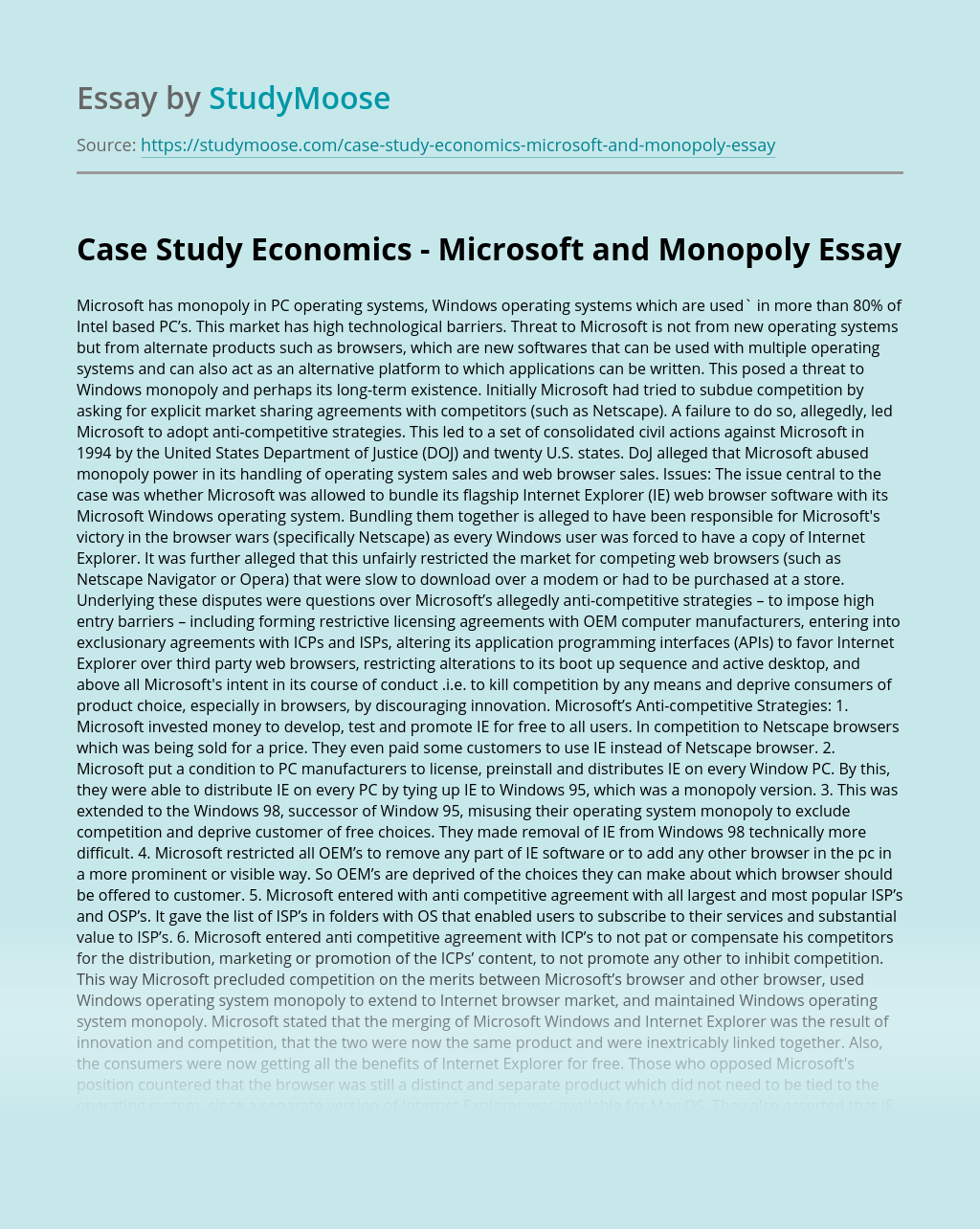