Truman Show and Allegory of the Cave Reality

Our curiosity is immeasurable. When we are curious, we approach the world with a fresh perspective, we ask questions and we are fascinated by new experiences. Rather than chasing a schedule or an anticipated set of answers, we sought out to follow our own ambitions and question the world. In order to comprehend the world around us, one must question it. Among those questions we should be enlightened by the fact reality and the truth of the world around us. Plato in his ‘Allegory of the Cave’ contends that the world of the senses is a world of delusion; and a correct philosopher must see through this illusion to the truth.

Don't use plagiarized sources.
Get Your Custom Essay on Truman Show and Allegory of the Cave Reality Just from $13,9/Page

Socrates stated when defending his right to theorize, that an unexamined life is not worth living, stating the position of trying to gain a true concept of reality and the world around oneself. This significant theoretical belief is apparent in the 1998 film ‘The Truman Show.’

In which the main protagonist, Truman Burbank, has lived his entire life as the star of a reality television show.

The show is displayed to a worldwide audience, twenty four hours and seven days a week. From the moment of his birth, he is unaware that his reality, the world around him, is merely an extravagant set; his coworkers, mother, wife and friends are all played by actors and his life is controlled by the director of the show ‘Christof.’ Plato’s “Allegory of the Cave” and “The Truman show” suggests that everyone’s perception of reality is different, and it depends on the environment or the world view you are bred in, however when an individual starts to question everything they are trying to determine whether the world around them is real or not by doubting in their personal relationships and investigating the surroundings around them making oneself question the presence of reality around with what is presented leading an individual to certain depths to discover the truth about the world.

Truman unravels the truth about what is real when he takes action to discover what is outside the world he dwells. This clue is exemplified in Plato’s ‘Allegory of the Cave.’ In the allegory, prisoners perceive shadows on the wall of the cave, as they have done consequently for the rest of their lives. They are lead to believe these shadows are factual and all there is to realism. One prisoner breaks free from his shackles and observers the shadows as a mere simulations of truth. He realizes the shadows are caused by dummies behind him, and upon leaving the cave, he realizes the purpose of the puppets were destined to signify an illusion of reality. Truman, until he becomes hesitant to the world around him is like such a cave prisoner.

He sought no evidence to believe that the world he dwells in presented before him was not real; likewise the prisoners do not see anything of themselves and one another besides the shadows. At one point during the film Christof states that “We accept the reality of the world in which we are presented,” in which Truman and the prisoner both accept the reality of the world with which they are offered, however, when they examine it, they discover the reality they live in is a counterfeit between their reality. In the scope of Truman’s world everything he acknowledges he thinks it’s true: his family, marriage and colleagues, however, they are just scripted characters. Christof, the director, acknowledges when describing its appeal, affirming that while the world Truman dwells is forged, there’s nothing false about Truman himself, making Truman the only factual person in the television show.

When Truman was about to make his exist to the real world, Christof tries to convince him to stay within the world he has formed for him, appealing that there’s no more reality out there in the real world than in the world he created for Truman. Claiming that only the same lies and deceit exist out there, however, the world he has made for him is secured and he has nothing to fear. Notwithstanding, Truman exists the studio to discover the real world. Likewise, Plato suggests that even if there had been any honors, praises, or prizes in the cave for those who were intelligent at identifying the shadows as they passed by, the prisoner would not desire these awards and neither would he envy the prisoners who were honoured.

Plato appealed that he would rather go through any miseries than continuing to live his life as the prisoners do. In essence, if one has investigated and discovered that the world they formerly knew was not the truth, they would rather agonize anything in the real world than live in a world they did discovered was not real. Likewise, Truman chooses to live in the real world he had learned exists, even if in the world he had existed in he had nothing to fear. This shows how through examining and attempting to find out the truth, an individual can discover what is real, and this understanding of what is real is the most significant thing. This theme is apparent in The Truman show; to have knowledge is more satisfying than being a prisoner to a world which isn’t, and to find out what is real one must investigate the world around them. It is evident that the question of how an individual can know what is real when they are raised and dealt with in ‘The Truman Show.’

The constrained world in which Truman lives in increases uncertainties about his seeming freedom. In order to determine what is real or not, Truman first doubts everything about the world around him and starts to set about trying to discover what was the truth, questioning his acquaintances and trying to leave the place he had always known. These were similar actions to those of the prisoner in Plato’s analogy; both Truman and the prisoner choose to escape their limitations, favouring to learn about the real world, than be imprisoned in the one they’ve always known. Therefore it can be reasoned that “The Truman Show” helps show that through not taking everything at superficial appearance and investigating the world around oneself, an individual can determine what is real.

Truman Show and Allegory of the Cave Reality. (2016, Mar 28). Retrieved from https://studymoose.com/truman-show-and-allegory-of-the-cave-reality-essay 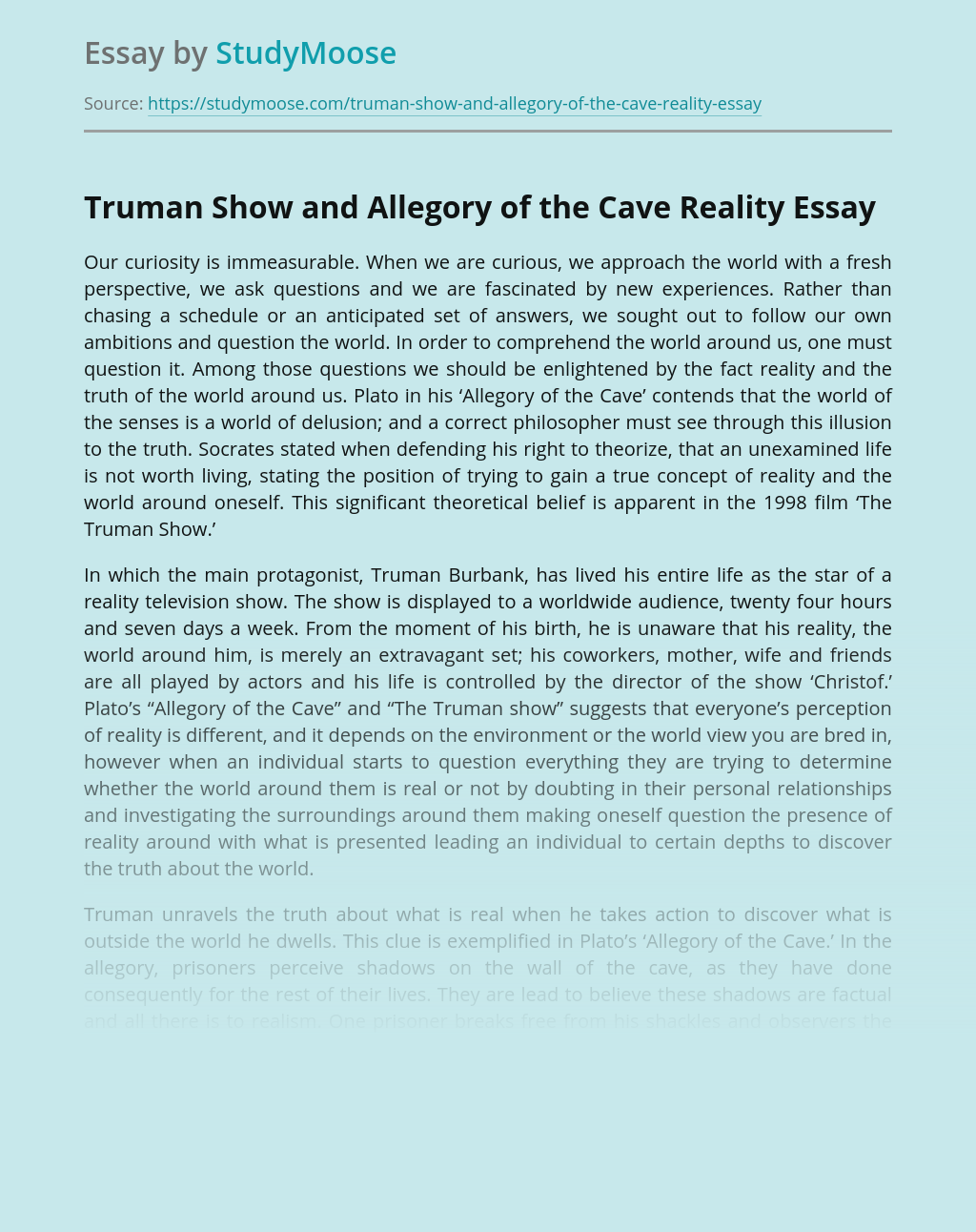 Charlotte’s Web by E.B. White is a children’s novel that tries to instill the values of friendship, loyalty and basic characteristics of humans through an adventure of farm animals. This novel was written in the early 1950’s at the time when the world was split by a curtain in two. It is open and direct...

The word “gothic” evokes feelings of doom, depression, death and decay. It suggests old extravagant cathedrals and falling down buildings. “Gothic” also suggests doomed relationships and lost loved ones. Gothic literature is meant to scare readers as well as to remind readers of their own darkness, of the darkness that they are capable of being....

Get Essay
The Alchemist - a Pilgrim's Progress

Allegory is a representation of an abstract or spiritual significance through concrete or product types, metaphorical treatment of one topic under the guise of another. To put it simply allegory is a story in words or prose, with double significance. It has a primary or a surface meaning and it has actually got a secondary...

American writer, Edgar Allan Poe is mostly known for his poems and tales. In 1843, The Black Cat was published. The writer starts by telling his story from a prison cell; this short story is based on dark romanticism with an unforeseen ending. The narrator of this tale which is unmentionable is described as humane...

Symbolism in Nathaniel Hawthorne's "The Birthmark"

Nathaniel Hawthorne’s The Birthmark is a story wrought with potent symbolism and destructive irony. It is the story of a cerebral scientist’s imprudent and superficial endeavor, and the all too trusting wife that had faith in him. This short story provides us with a moral allegory and theme that is universally vital through symbolism. The...