November 3, 1896 – Rizal arrived at Manila aboard the Streamer Colon. Rizal was quietly transferred to Fort Santiago. Spanish authorities gather evidences against Rizal while many Filipino patriots who had been recognized at his side were brutally tortured to implicate Rizal. Rizal’s brother, Paciano, was also arrested and brutally tortured but never said anything against his brother *Preliminary Investigation

November 20, 1896 – Judge Advocate Colonel Francisco Olive summoned Rizal to appear before him. Rizal was subjected to a grueling five-day investigation and was informed of the charges against him.

Turn in your highest-quality paper
Get a qualified writer to help you with
“ Trials And Execution Of Great Leader Rizal ”
Get high-quality paper
NEW! AI matching with writer

The only right afforded to Rizal was the right to choose his defence lawyer. He chose Don Luis Taviel de Andrade, 1st Lieutenant of the Artilleru. November 26, 1896 – After the preliminary investigation, the Judge Advocate General Don Nicolas de la Peña submitted the following recommendations:

Thus, was never issued to the people. December 26, 1896 – The court-martial of Rizal started in the military building called Cuartel de España. *Rizal proved his innocence by twelve points:

December 28, 1896 – Governor General Camilo Polaveija approved the decision of the court-martial and ordered Rizal to be shot at 7:00 o’clock in the morning of December 30 at Bagumbayan Field (now known as Luneta). *Last Hours of Rizal

Rizal spent his last 24 hours in his death cell where he was visited by his loved ones and wrote his farewell poem, “Mi último adiós” (My Last Farewell) which he hid in the alcohol cooking stove and was given to Trinidad during their visit. December 30, 1896

5:30 AM – Rizal wrote two letters, first addressed to his family and second to his only brother Paciano. First Letter:
Rizal was asking for forgiveness for all the pain that he has cause his family. A message to his sisters to love their parents so as to be treated the same by their children in time. He wanted to be buried in the ground, with a stone cross over it, with his name, birth and death. Have pity on Josephine

He told his brother how much he misses him. Not seeing him for 4 years and a half. He was sorry for leaving his brother burdened with the weight of the family and their old parents. His gratefulness on how hard his brother worked to give him a career, believing that he tried not to waste time. About 6:30 AM – a trumpet sounded at Fort Santiago, a signal to begin the death march. Rizal set on his walk from Fort Santiago to the Bagumbayan Field. Beside him walked Lt. Luis de Andrade and Fathers Jose Vilaclara and Estanislao March. Before and behind him were armed soldiers. Rizal was dressed elegantly in a black suit, black derby hat, black shoes, white shirt, and a black tie. His arms tied from elbow to elbow. He was blessed by one of the priests and offered him a crucifix to kiss. Rizal reverently bowed his head and kissed it.

He requested the commander of firing squad that he be shot facing them. He was denied. The death ruffles of the drums filled the air. The command “Fire” was heard, and the guns of the firing squad barked. And even at the moment of his fall, Rizal turns his body to the right with supreme effort with face upward facing the morning sun. His last words were those of Jesus Christ: “Consummatum Est.” – It is completed. After he was executed, the Spanish spectators shouted “Long live Spain! Death to the traitors!”. *Rizal died at exactly 7:03 am aged 35 years, five months and 11 days. 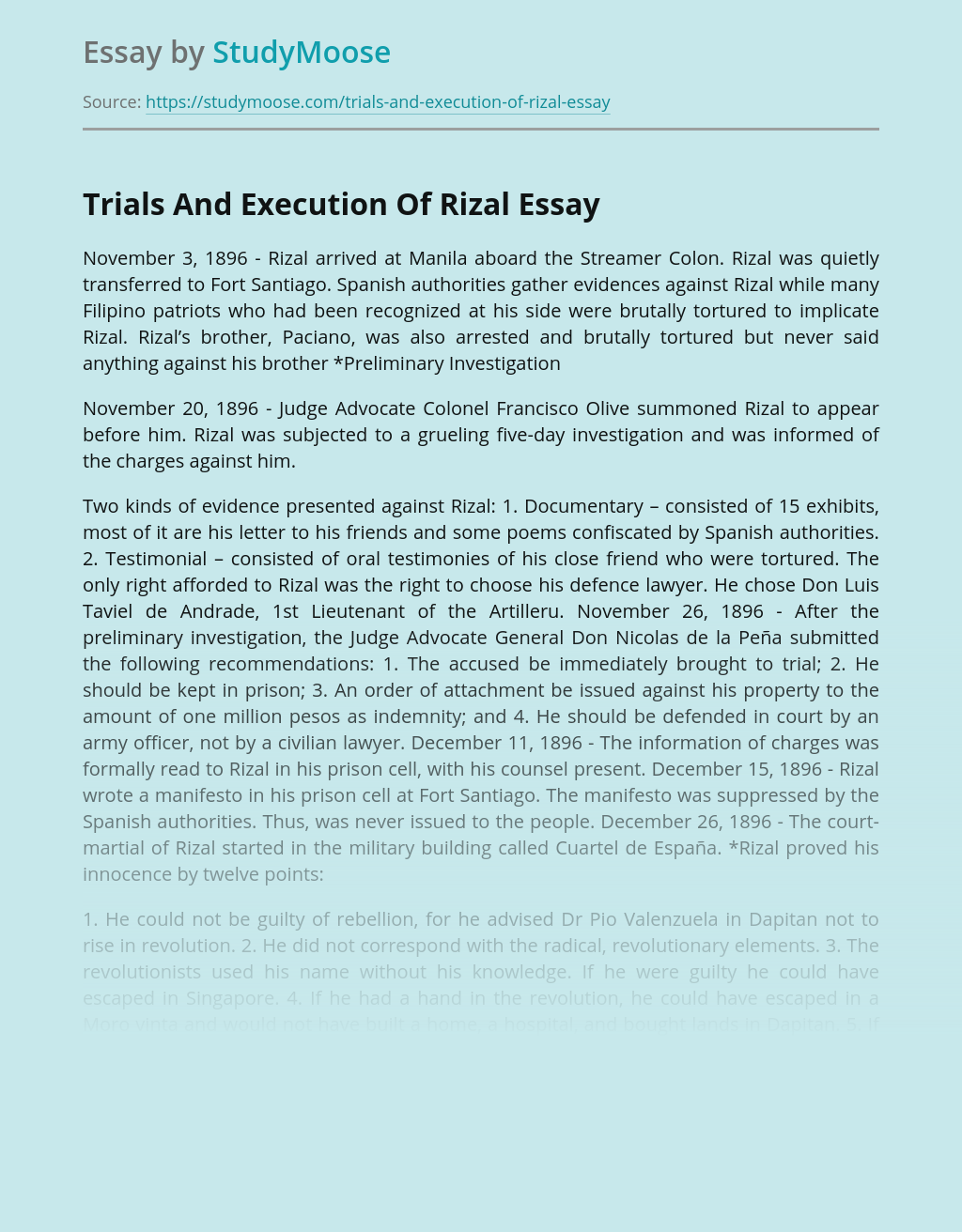 Turn in your highest-quality paper
Get a qualified writer to help you with
“ Trials And Execution Of Great Leader Rizal ”
Get high-quality paper
Helping students since 2015
Stay Safe, Stay Original