“All persons born or naturalized in the United States, and subject to the jurisdiction thereof, are citizens of the United States and of the State wherein they reside. No State shall make or enforce any law which shall abridge the privileges or immunities of citizens of the United States; nor shall any State deprive any person of life, liberty, or property, without due process of law; nor deny to any person within its jurisdiction the equal protection of the laws.” This was taken directly from the Bill of Rights (Amendment XIV section I), and it clearly states that nothing should make or enforce any law that dispossesses the immunity of the citizen on trial.

In the trials of Tom Robinson and Orenthal James Simpson, this amendment seemingly may not have been considered. Every man should be treated equally, regardless of his race and social status, and in these two trials that statement was not being applied.

The social and political climate of the town in both cases was a major factor in the result of Robinson and Simpson’s trials.

In To Kill A Mockingbird, Tom Robinson was a man of innocence that was accused of rape, a crime he did not commit. Back in the 1930’s, white men were constantly trying to prove the “natural inferiority” of the African American race, condemning them as unreasonable. The jury was unable to look past race and praise the integrity of Tom and epitomize the opposite of prejudice. If Tom Robinson were a white man, the outcome of the trial would be entirely different.

However, in 1994, times have shown to have changed from the extent of racism and prejudice from the early 1900’s. Now, money and popularity is power, despite the race of a person. OJ Simpson was an African American, who was ranked fairly high on the social scale. He was a well-known, NFL-all star with a great deal of money on his side. The jury were in favor of OJ Simpson’s innocence from the beginning because they felt that a man like himself could not a crime as extreme as the murder of two people. Thus, in both cases, the race and rank of the defendant detained a major position in the result of their trials.

In both trials, the evidence appeared to be somewhat disregarded by the jury. In Tom’s trial, there was no medical verification that he took advantage and raped Mayella Ewell. The jury could only base their guilty sentence of Tom on what was said by the Ewells in the courtroom. Back then, a white person’s word was automatically the truth when it was held up to the credibility of someone whom was black. At Simpson’s trial, the substantiation of murder was observed wrongfully. At the crime scene of Nicole Simpson and Ron Goldman, blood was found in OJ ‘s car, his socks, and a pair of his rubber gloves, upon many other things. For some reason, the jury looked past this evidence of guilt, and that is wrong.

Although there are many similarities present between the two trials, there are also some differences. One difference is that there was a change of venue made in one case but not the other. It was deliberated in Tom’s trial but in the end it was determined that a change of venue would not be necessary due to the fact that any jury would find a black man guilty in any case. OJ ‘s case was moved to the downtown district instead of where the crime occurred to avoid racial imbalances and to accommodate the media crash in Los Angeles (trial was moved to Santa Monica). This also made it possible to change the jury, which also had a major effect on the result of OJ ‘s trial.

The final verdicts of the two trials are not truthful. Both Tom and OJ were not treated equally as citizens of the United States. Instead, they were thought of as an evil and unreasonable black man and a NFL all star who would never commit a crime. Perhaps if the jury had realized that they were treating these two people unequally and unfairly the verdicts of these trials would be utterly different. These trials demonstrate how race, social status, and money have an effect on the current law system. All people are created equally, so they shall be treated equally in any matter 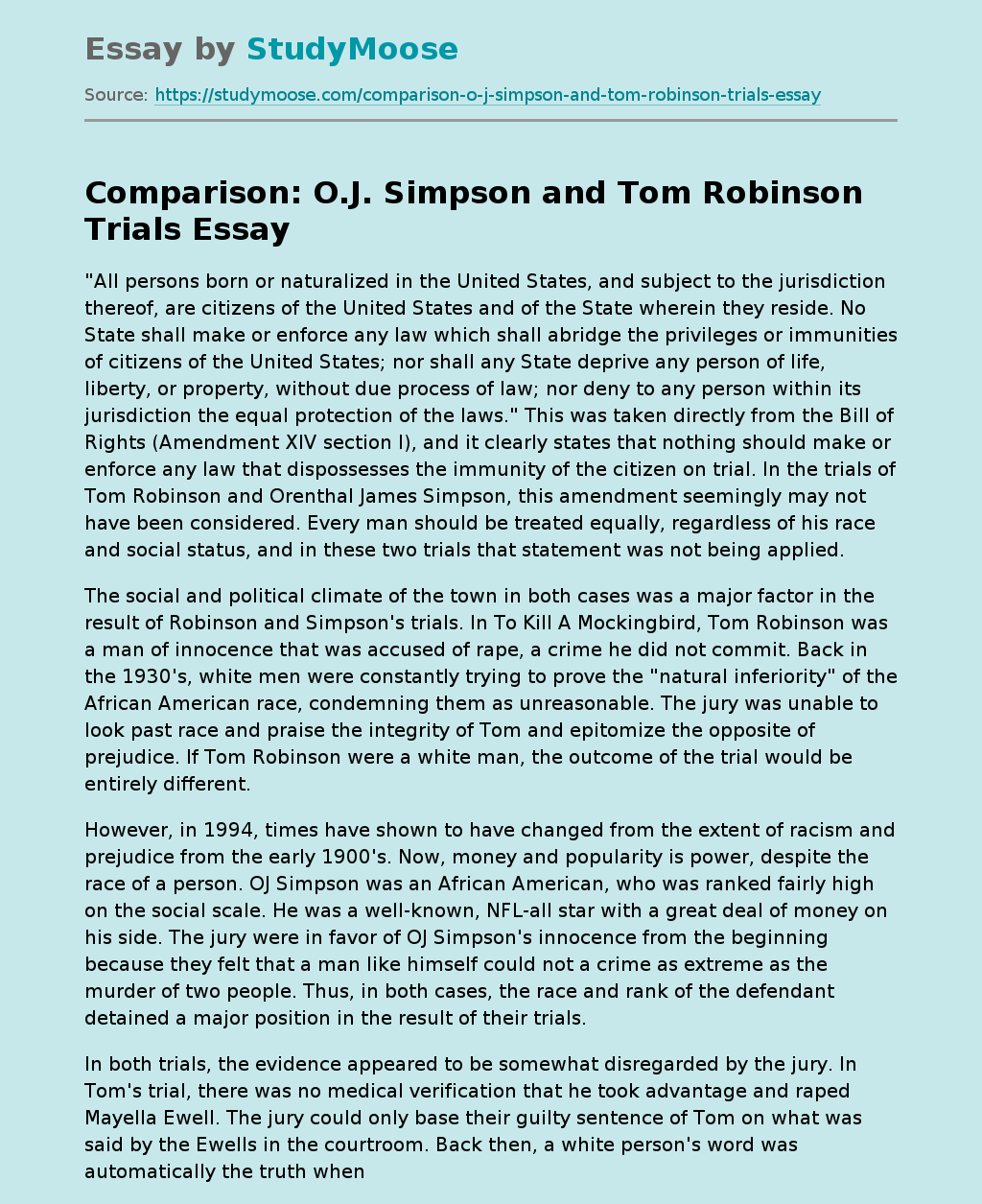