What Kind of Man is Tom Robinson?

Tom is a generous, hard-working, and polite black man in Maycomb. Tom Robinson could be perceived as scary, intimidating, or anything of the likes if you didn’t know him as a person because of his motionless left hand or how he was a black male with muscles and because Tom Robinson was perceived as a scary man many people didn’t get to know him for who he really was, a hard-working, polite, and generous person.

Tom’s personality could be described in many ways but the 3 most accurate would be respectful, hard-working, and generous.

Don't use plagiarized sources. Get your custom essay on
“ What Kind of Man is Tom Robinson? ”
Get custom paper
NEW! smart matching with writer

These traits are shown in the scene of him being questioned by lawyers at the courthouse in the ‘How To Kill a Mockingbird’ novel. When he was being questioned by Mr. Gilmer and he said ‘You did all this chopping and hard work from sheer goodness, boy?'(197) and when Mr. Link stood up and said ‘I just want the whole lot of you to know one thing right now.

That boy’s worked for me for eight years an’ I ain’t had a speck o’trouble outa him. Not a speck.'(195). These show that he’s a hard-working mean because he didn’t have to help Mayella out with busting up the chifforobes and his own boss was saying he was a good and hard worker that he’s never had trouble from.

Tom’s behaviour is much like his personalities as he can be described as calm, helpful, and quiet. Tom can be described as such in the novel because during the trial when Mayella and Bob Ewell are testifiying against him he doesn’t say much until he gets called to the stand to testify and doesn’t react as he’s being accused of raping Mayella, nor does he start becoming aggresive when he finds out the jury says he’s guilty.

He shows traits of being helpful when he explains as he’s testifying that when he was helping Mayella out nearly every day he walked home from work in the fields with fixing something for her or busting up chifferobes and never once accepting the nickles he was offered.

Despite Tom having a good personality and behaviour traits, his appearance throws many people off because he can be envisioned as scary because of the fact he’s a large black man with muscles from everyday labor and a disabled right arm that doesn’t work. This can be proven when Tom gets named guilty despite the obvious factor that he couldn’t of rapped or harmed Mayella because he only has use of one hand that was the opposite of what Mayella said she was being choked, held down, and hit by. Tom Robinson was perceived as a scary man to the jury because they didn’t know who he truly was as a person, hard-working, generous, helpful, respectful, and polite because all the could see was what he looked like on the outside, large, crippled and muscles that could be seen from the outside of his shirt. Tom was judged by the way he looked instead of who he was as a person and his obvious disability.

What Kind of Man is Tom Robinson?. (2016, Sep 09). Retrieved from https://studymoose.com/what-kind-of-man-is-tom-robinson-essay 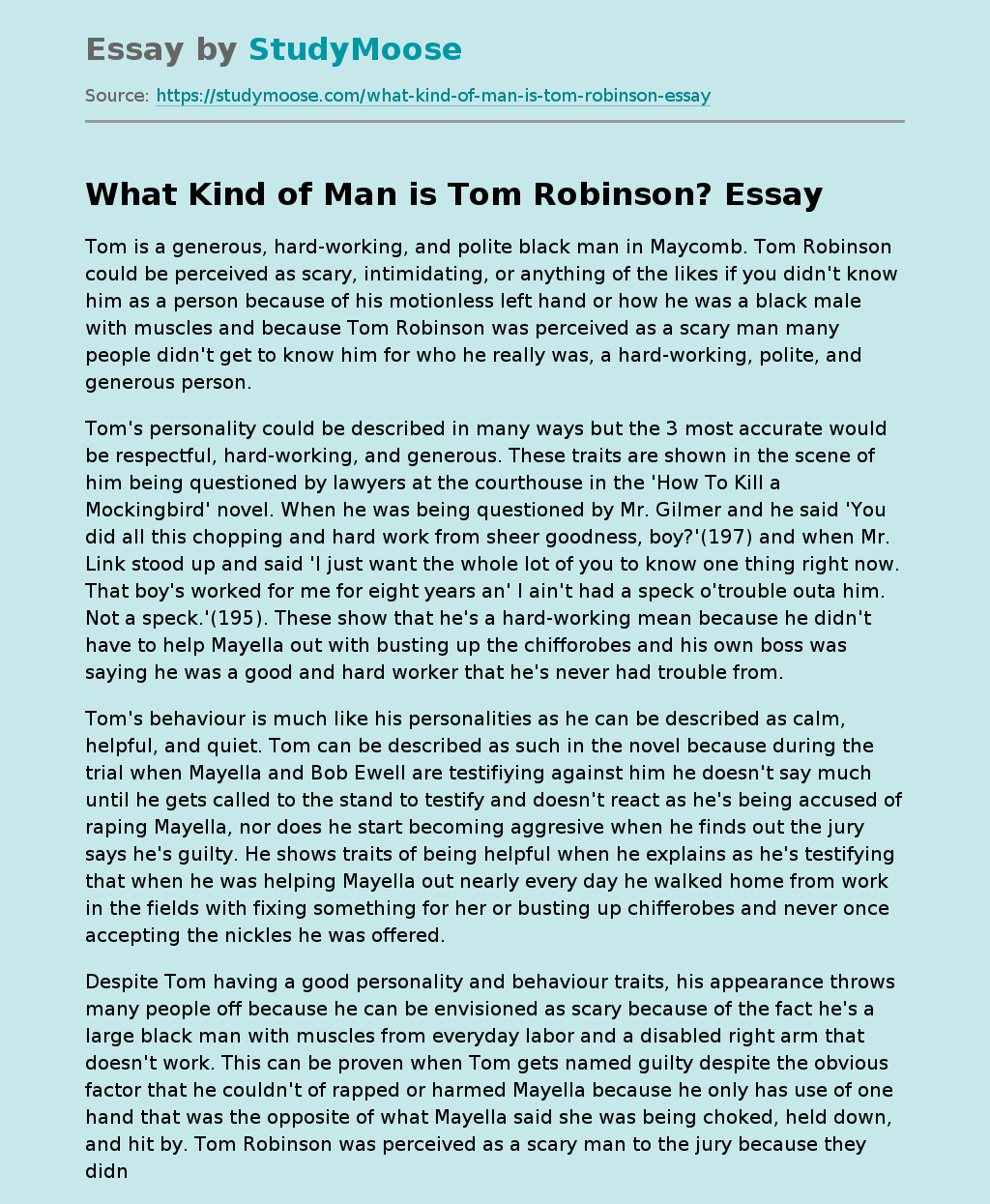