Tone of A Poem Her Kind

Anne Sexton’s poem titled “Her Kind” is a popular poem filled with powerful imagery, diction, and syntax. Her particular use of these elements in different ways contributes to the robotic and non-human tone of the poem. Her use of syntax in the poem is done in a very clever manner. The lines of the poem are short and almost all contain commas. These commas are a part of the syntax because they contribute to the sentence structure. They split up each line into two halves, and it almost seems like the commas are acting as sighs from the author showing her boredom; “I have gone out, a possessed witch.

Don't use plagiarized sources. Get your custom essay on
“ Tone of A Poem Her Kind ”
Get custom paper
NEW! smart matching with writer

There is no enthusiasm in the poem because of the topic of the poem and its commas. These commas also help to set a pace for the reader to read the poem. For example, when one reads “dreaming evil, I have done my hitch,” he will read this slowly because of the comma in the middle of the line.

This comma slows down the readers pace and allows for Sexton’s boredom to come through. Sexton also uses strong diction in her poem “Her Kind.” Even though the words in this poem are not long and complicated words, they still speak volumes. Sexton’s use of simplistic words contributes greatly to the overall robotic and bored tone of the piece. An example of this can be seen with the lines “I have been her kind.”

These short words quickly get the point of the poem across in a simplistic way.

The imagery used in this poem helps the reader to picture the author as nonhuman, and doing nonhuman activities. When Sexton describes feeding the creatures in the forest, such as the worms and elves, she creates a nonhuman and unordinary character. Even though this character seems inhuman and odd, one can analyze the poem and realize that Anne Sexton is referring to her own life and personal experiences. When Sexton states that she “fixed the suppers for the worms and the elves: whining, rearranging the disaligned,” she is describing how she made dinner for her whining and fidgeting children.

This poem conveys a strong message about Anne Sexton’s life. It seems as though Anne Sexton is not very satisfied with her current life, and how she is perceived. The robotic and inhuman tone of the poem is represented when Sexton describes herself as a weird creature doing activities a normal person would not do, and she uses strong diction, syntax, and imagery to do this. 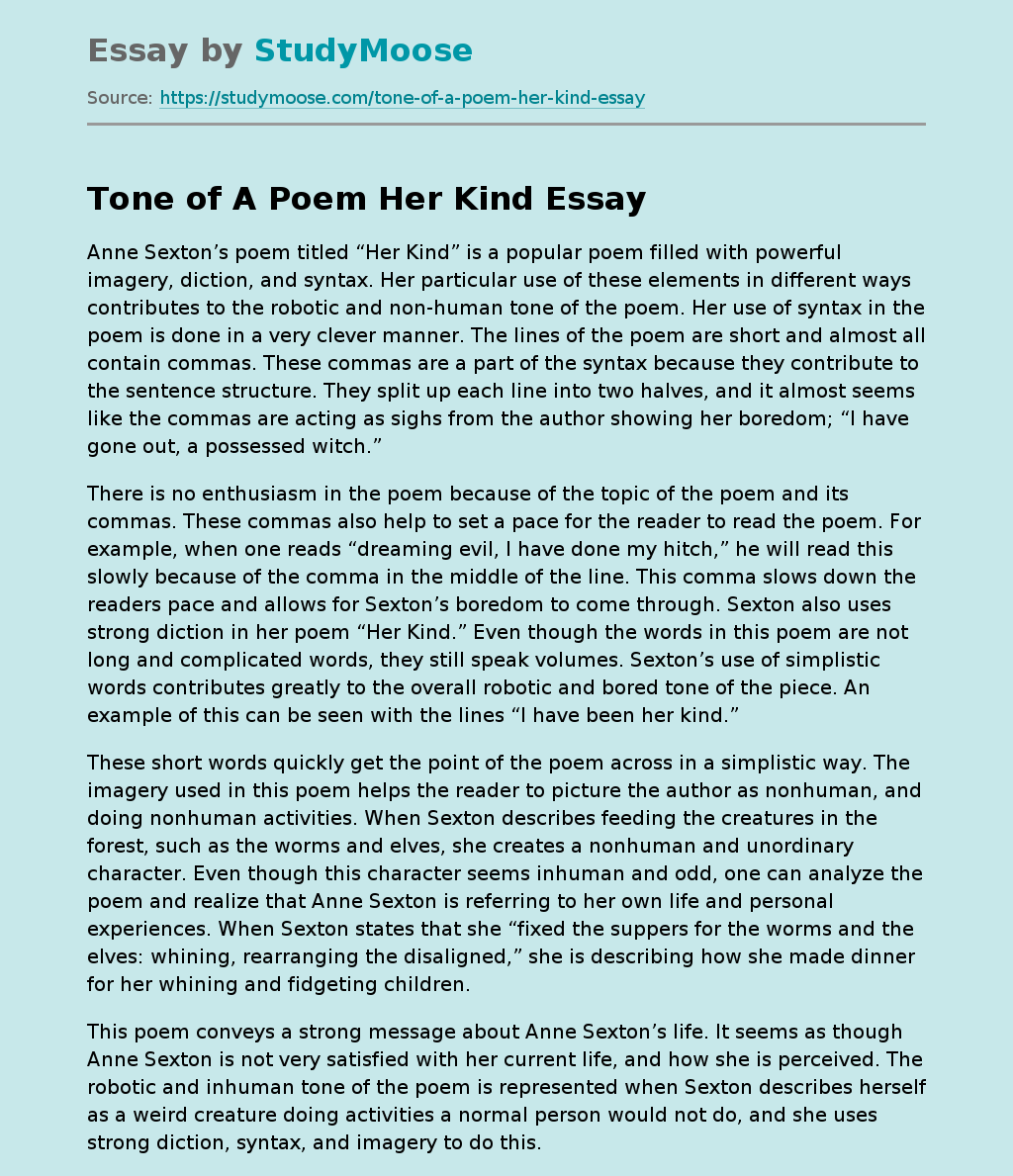