Judith Anne Neelley belongs to the growing list of women offenders convicted for heinous crimes. Just 18 years old, she was convicted in 1983 in Alabama for the brutal murder of a young girl and was meted the death penalty. However, contrasting views of whether the death penalty should be implemented and racial bias as well, influenced a former governor of the state to commute her sentence to life imprisonment in 1999 (ProsandCons.us, 2009).

Don't use plagiarized sources. Get your custom essay on
“ Life and Crime of Judith Anne Neelley ”
Get custom paper
NEW! smart matching with writer

Two years later, she lured and kidnapped Lisa Ann Millican, 13 years old of Rome, Georgia, who was under the auspices of a home for neglected girls (Ramsland, 2007). She was sexually assaulted, stabbed, injected with drain cleaner, shot to death and her body pushed down a mountain where it was found days later (Ashley, 1999).

After this, she persuaded a man and his companion to ride with her and show her around the town because she was new there.

She then shot but did not kill the man – John Hancock and took her girlfriend Janice Chatman to a motel where she and her husband molested and raped her (O’Shea, 1999). Over-all, she was involved in 15 murders that occurred not only in Georgia but also in Tennessee and Alabama (O’Shea, 1999). She also continually committed minor offenses such as swindling, car theft, petty theft, robbery and minor assaults (Furio, 2001).

Judith Neelley did not attend middle school or high school and she was not known to hold any permanent job, doing odd jobs and also swindling and robbing in order to survive (Wetsch, 2005).

As a teenager, she spent time in a youth center, having been abandoned by her parents. There she claimed that she was sexually assaulted (Wetsch, 2005). She was pregnant during her detention for armed robbery and at 15-years old she gave birth to twins (O’Shea, 1999). Her third child was also born in prison just before her trial for the murder of Lisa Millican. There is no mention of her family or childhood in the literature encountered as she was not fond of giving interviews.

At a very early age, she married Alvin Neelley who was twice her age, an ex-convict who served time for shooting his first wife. With their common behavior of being violent towards women, Alvin figured as a partner in the crimes she instigated. They referred to themselves as The Nightrider and Lady Sundance (Ramsland, 2007). Following his release from prison for their robbery in 1980, Alvin took a job at a gas station and used his earnings to buy two cars with CB radios installed (Wetsch, 2005). Judith will drive around to look for the next victim and will radio Alvin to join her when the victim is in the car. Their relationship, though sexual in nature, was at times violent and lasted because of this partnership.

According to her husband, Judith’s personality was very dominant and she was violent which accounted for her strong influence over him. Alvin Neelley later stated that he went along because his wife had such power over other people and he was left with no choice (Ramsland, 2007). On the other hand, Judith stated during the trial that she took women and young girls to please her husband because he wanted them, that he willingly planned and executed the acts, that he battered her and threatened her children to force her to take part (O’Shea, 1999).

However, investigators and the jury eventually agreed that Judith actively participated in the killing sprees as the brains behind the murders (Kelleher & Kelleher, 1998). While on predating sprees, she brought her children along. They helped her earn the trust of the people she lured. The toddlers witnessed the sexual molestation and torture of Lisa Millican and the other victims by their mother. This type of parenting, husband and wife relationship and over-all family life deviates from what is typical.

She was not found by the jury to be mentally disturbed or to be an abused wife – factors which could help explain her brutal behavior. After her conviction, she appealed to the court but exhausted the appeals process with futility (ProsandCons.us, 2009).

Judith Neelley did not fit the profile of the typical murderer. She was female, white, a young mother, slim and blond. Females were generally regarded as soft, caring or docile and not aggressive or violent (Schurman-Kauflin, 2000). At the time she committed murder, the stereotype of persons who had the capacity to perform such crimes was male and probably black. For this reason, it was not seriously believed at first that she perpetrated the murders (Texas A&M International University, 2004). Initially, the burden of accountability for the acts was brought heavily on her husband because he was the male. At the end of the trial, she got the death penalty while her husband got two life terms.

Based on current information on criminal behavior however, Judith Anne Neelley fits the profile of a female serial team killer. Because she lacked the strength to subdue victims or carry dead bodies, she raped and killed together with her husband who was also a sexual killer (Kelleher & Kelleher, 1998). Only one thing sets her apart from other females in serial team killing – she had already attempted to kill a man by shooting him before she even met her husband (Furio, 2001). She was delinquent as a teenager and before age 20, performed her first serial killing. Very sociable, she was able to talk her victims, either when they were alone or with their companions, into going for a ride with her in her car (TAMIU, 2004).

She felt herself superior over others and called the authorities about Lisa Millican and where her body could be found, implicating a warden as the one responsible. She was cruel, merciless and delighted in the suffering and death of her victims. During the trial, she played the role of victim in saying that she was a battered wife so that her husband would get the maximum penalty while she will serve time only as an accomplice (TAMIU, 2004).

The strain theory of crime causation comes closest to explaining Judith Neelley’s behavior. The extreme stress from social and economic factors that she experienced as a young girl – being abandoned by her family, her poverty and then being sexually molested while in a juvenile center, all contributed in pushing her to commit crime. Unsuccessful in obtaining power from money or education, she killed others to feel powerful. 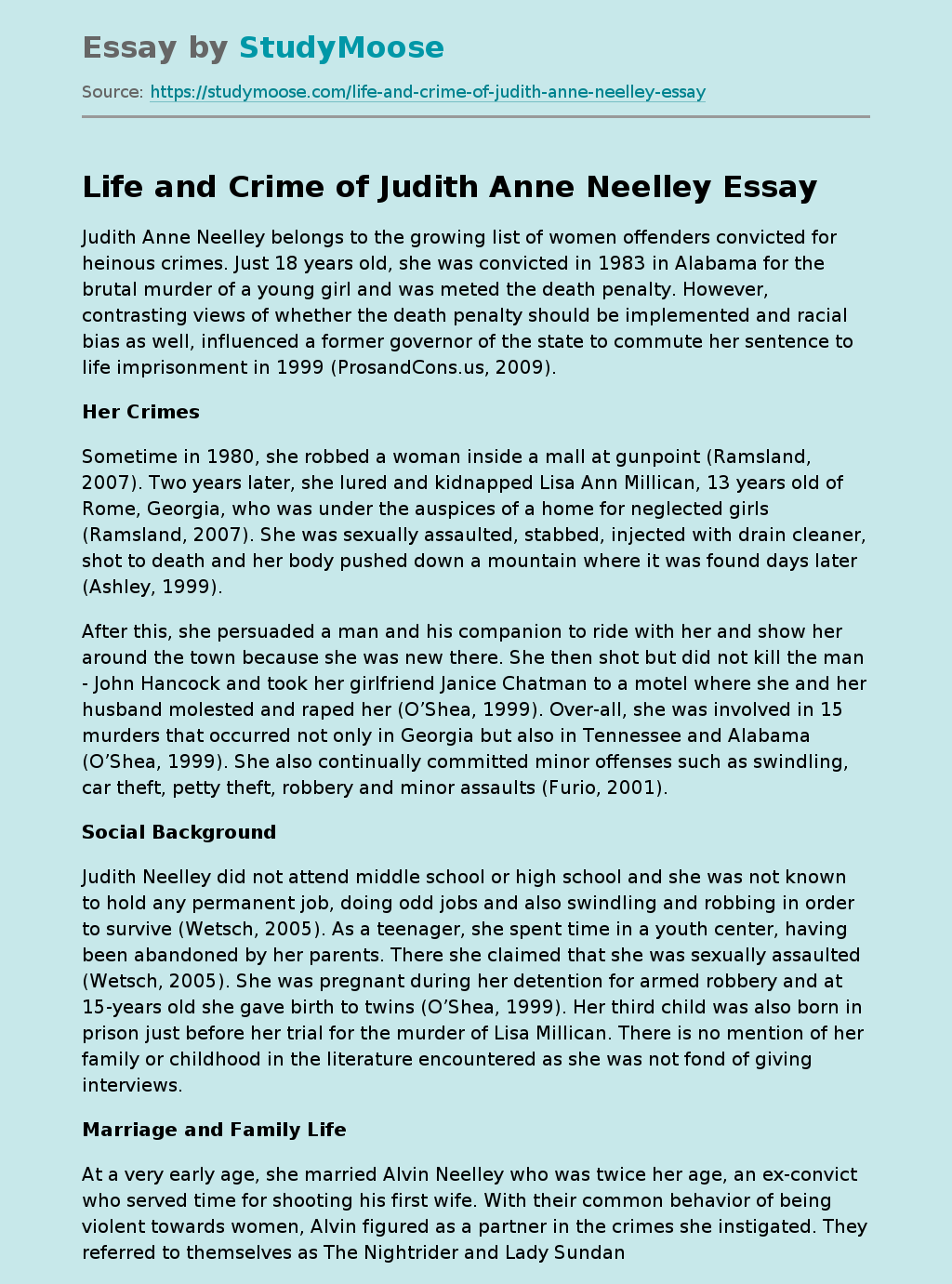