Don't use plagiarized sources. Get your custom essay on
“ Commentary on Judith Wright’s “Bora Ring” ”
Get custom paper
NEW! smart matching with writer

Through her use of diction, structural devices, and imagery, Wright expresses her sorrow at the disappearance of Aboriginal cultural heritage. In the first stanza of “Bora Ring,” Wright describes the loss of the songs, dances, stories and rituals of the Aboriginal Australians. Her use of the adjectives “gone”, “secret”, “useless” and “lost” emphasizes Wright’s regret that this ancient culture has disappeared. The poet, through her use of the metaphor “lost in an alien tale”, highlights how Aboriginal culture has been replaced by European culture as a result of white settlement in Australia.

Her use of the word “alien” stresses her view that the white colonists do not belong in Australia; they are foreigners in the land. Wright’s use of end-stopping and caesura, in combination with trimeter and pentameter, creates short emphatic phrases that portray her belief that this loss is irrevocable. The slow pace of the quatrain also serves to depict the poet’s remorse at the destruction of indigenous traditions. In the second stanza, Wright describes the remains of a bora ring.

The Aborigines are no longer present: “Only the grass stands up / to mark the dancing ring. Nature is the only reminder of the lost Aboriginal culture.

The grass is personified as “standing up”; it encircles the dancing ring, almost as if it is guarding this sacred area. Wright also personifies the apple- gums. She suggests that their movements and sounds in the wind, “posture and mime a past corroboree, / murmur a broken chant. ” Her choice of the verbs “posture and mime” emphasizes the way in which past generations of indigenous people gathered for corroboree, a sacred and ceremonial meeting involving music, song and dance. Through the use of personification Wright is thus able to convey the absence f the Aborigines in the bora ring.

Wright further conveys the poignancy of the Aborigines’ disappearance in the third stanza. Structurally, the third and first stanzas parallel each other; both list aspects of indigenous Australian culture that no longer exist. In the first stanza, Wright highlights the loss of the “song” and the “dance”. Similarly, in the third stanza, she notes the absence of the “hunter” and the “spear”. Wright describes the “spear” as “splintered underground”, giving the reader an image of a weapon broken, smothered in the dirt, lying unseen.

Thus, the poet stresses the xtinction of the Aboriginal tribal traditions. Wright also notes, through her metaphor of the “painted bodies/a dream the world breathed sleeping and forgot” that rituals such as corroboree are no longer practiced. Her use of the words “dream”, “sleeping”, and “forgot” emphasizes that these ancient rituals, so much a part of Aboriginal culture, have ceased to live on today. Wright then states that “the nomad feet are still”. Here, the word “nomad” refers to the itinerant lifestyle of the Aborigines, “still” now, since the Aboriginal way of life no longer has any value in 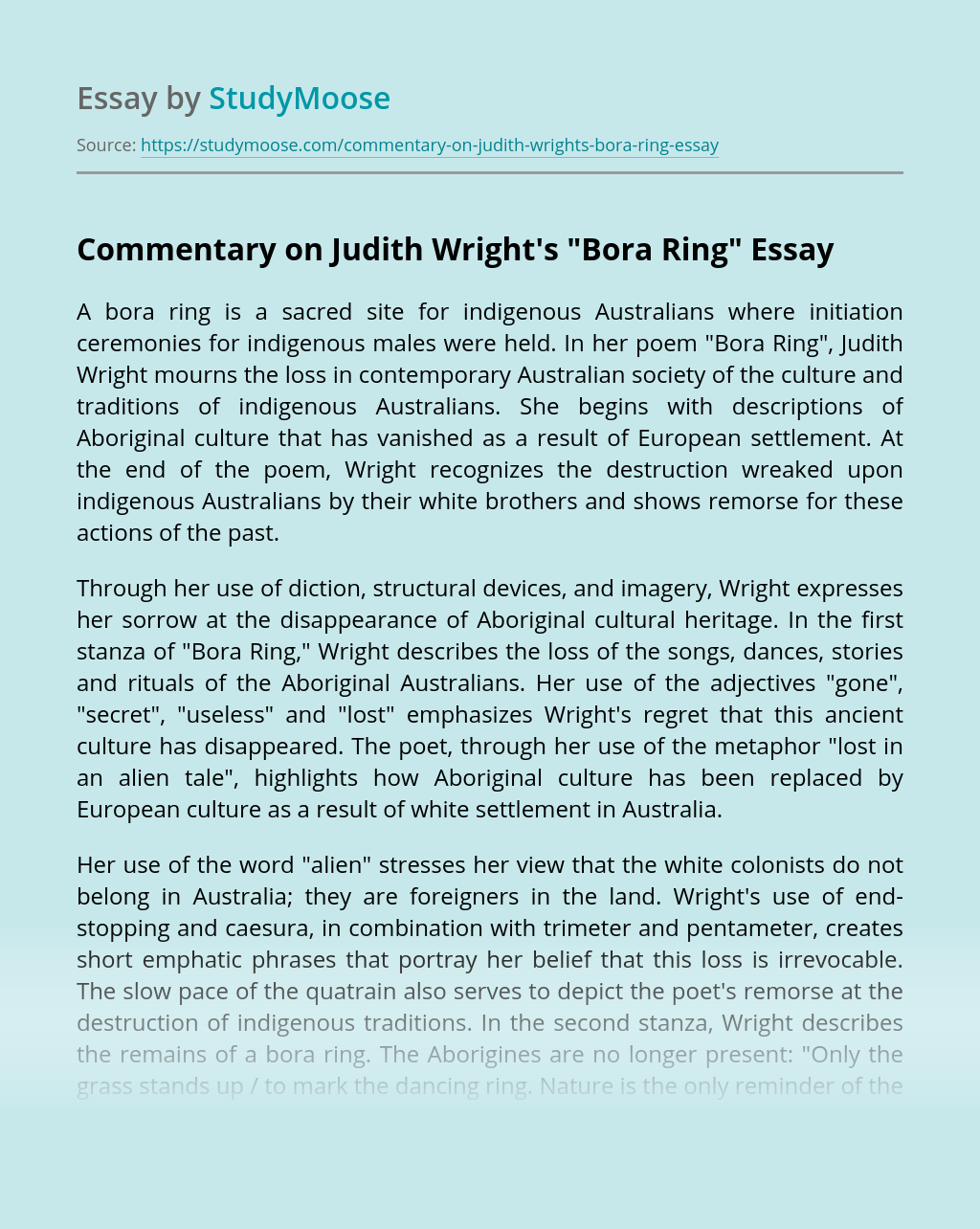