Hunting snake is the poem written by Judith Wright, an Australian environmentalist, who shares her amazing encounter with a great black snake. The main theme of the poem is nature. Here, the description that the poet gives about “the great black snake” is pretty much similar to the red bellied black snake which was found in the writer’s hometown in New South Wales. In this poem, the persona or the voice is that of the poet herself.

The poem is written in a quatrain, i.

Don't use plagiarized sources. Get your custom essay on
“ Hunting Snake by Judith Wright ”
Get custom paper
NEW! smart matching with writer

e four stanzas altogether and each stanza with four lines each. There is also a definite rhyme scheme of the poem :ABAB but the poet has changed the rhyme scheme in the last stanza making it ABBA to make the stanza different from the rest of the poem. The meter of the poem is iambic tetrameter but there is a slight variance in this meter throughout the poem to create special effects. Also, the accurate use of caesura has made it easy for us to visualize the image.

The poet is an environmentalist and a nature lover, and the first two lines, among the others, helps to prove it. The personification “late season’s grace” makes the season seem like it is a graceful and a pleasant human being. The second line of the poem “under the autumn’s gentlest sky” also suggests that the poet loves the nature and respects it too as she has used the adjective “gentlest” to describe the sky. These first two lines also implies that the day had been pleasant and normal until the poet encountered the “great black snake” after which she was mesmerized by him.

In the very first line, Wright has used a caesura after “we walked” followed by “and froze half through a pace”. The use of the caesura after walked makes us imagine how stunned they were that they froze right in the middle of their walk. The use of the word “pace” hints that the poet was walking in a steady speed… HOW DOES THE POET CREATE MOOD IN THIS POEM? – HUNTING SNAKE

They were walking down under the sun. Enjoying the pleasant weather of autumn. When suddenly they saw a hunting snake went by. What kind of feeling is that? It’s a feeling of scared, terrified. “Froze half-through a pace” is a sentence taken from the poem. It shows just how anxious they are. “Sun-warmed in this late season’s grace under autumn’s gentlest sky.” The first line of the poem describes how warm their feelings were before the snake comes.

Sun-warmed is the keyword of the sentence. It shows how they feel passionate relaxing and chilling out. I love the word, it reminds me of summer and all its greatness. “The great black snake went reeling by. Head-down, tongue-flickering on the trail.” That gave me an obvious picture of how the snake ruins the gorgeous image of autumn. Fallen leaves everywhere, orange-colored sky. But then the snake comes by, reeling above the fallen leaves and for a moment, autumn isn’t pretty anymore. “We lost breath to watch him pass.”

That is very obvious on how terrified they were. They lost their breath. I’m not sure if they really meant it, literally, or it’s just a metaphor. But it really shows how scary the snake was. I like how the poet chose these words. It shows just the perfect meaning for this poem. “Fled living from his fierce intent.”

Well, the word ‘fled’ caught my eye. Once again, I love the word choice! Fled means running away, so it really shows how the snake is always running away and right now it’s living from it’s bad intentions. “Cold, dark and splendid he was gone, into the grass that hid his prey.” This line gave a feeling that the snake was gone, yet they are still feeling aware. Not fully relieved. They knew the snake was still hiding behind the grass and that’s why they were still scared of going away. “We took a deeper breath of the day, looked at each other, and went on.”

Those are the last two lines of the poem. It shows what feeling they had when the snake was finally all gone and the area was once again safe. Yes, it’s relieved. A huge one, I bet. They took a deep breath, and they moved on. Well, we don’t know what happens next? Perhaps they would act like it never happens, or would they talk about it all day? That’s it. Those are the sensations this poem gave me. At the beginning, it gave me a pleasant feeling of a day with a nice weather. When suddenly a snake came by and the feeling changed, from pleasant, to anxious. And when the snake was gone, they felt relieved. 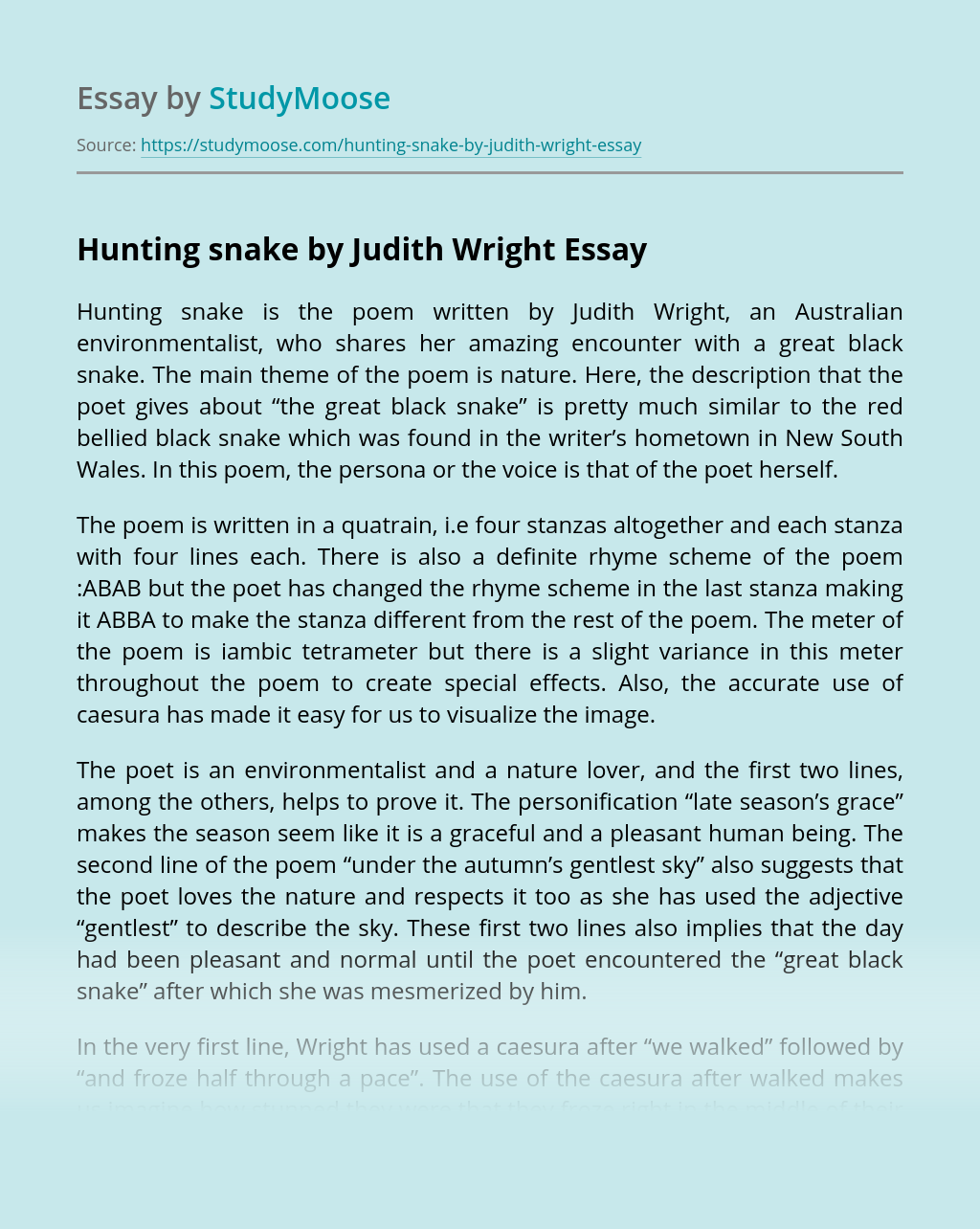