The main subject of the poem is the sudden appearance of the snake and the surprised reactions of the poet and her companion. The snake does no harm to the walkers and they in turn do not harm the snake.

As an environmentalist, Wright sought to preserve the natural surroundings in Australia. She cared intensely for the Aboriginal people who lived in close intimacy with nature which the settlers did not. The poem, on the surface, is about the sudden appearance of the snake but it could also be about the various creatures that lived in Australia and the animal friendly way of life of the aboriginal people.

The initial emotion that overtakes the poet and her companion is shock or surprise. They are walking along a grassy patch (not a jungle) when they see the snake “reeling by”. Soon this surprise is overtaken by admiration for the perfection of its body, the symmetry of the scales on its surface and the single minded (“fierce intent”) pursuit of its prey.

The poem has a tightly controlled structure that does not permit much innovation. The beginning of the poem describes a peaceful scene when nature is full of the mellow sunshine of autumn, then comes the surprise of finding a snake in their midst. But there is no sudden movement or strong emotion expressed so there is no change in the structure either.

The poem has four quatrains with a traditional rhyme scheme of abab, cdcd, efef in the first three stanzas but the fourth stanza is ghhg.

The change in the last stanza is like the letting out of breath (“We took a deeper breath of day,”) after having unconsciously held it while the snake was around. Thereby emphasising the relief that the observers felt. If you extend beyond the surface level meaning, you could explore the symbolism here: is Wright challenging the attitude that we have towards the indigenous Aboriginals, by highlighting the judgement that the observers have made (that the snake is dangerous) when in actual fact, it is just going about it´s daily life? Are we too quick to make a judgement on a people group that has different values to us?

You might like to link this to A Different History, as the Brits coined the category, “Aboriginal Australians” after they begin colonising Australia in 1788. Notice how language is used to form stereotypes.

The language used is very simple but the imagery is strong making it a visceral poem. The choice of sibilants (“we scarcely thought; still as we stood”) mimics the movements of the snake to highlight the immediate fear that the observers feel towards it. Again, are we afraid of what we don´t fully understand and therefore, make unnecessary judgements?

The use of strong imagery marks the poem. The opening images are of a balmy day in autumn when there is a “mellow fruitfulness” everywhere. The calm is broken by the sudden arrival of the snake. The picture of the snake in single minded pursuit of its prey, tongue darting as it feels the ground, the grass parting as it moves through are pen pictures which allow us to “see” the event. The poem focuses on the event rather than the narrator allowing us to share in the emotions. Symbolically, is Wright encouraging us not to impulsively respond to our immediate reactions when faced with something unknown, or something that we don´t fully understand, so that we reflect upon our preconceived notions about a person/situation? Thus, is she challenging the stereotypes surrounding the Aboriginies?

The rhyme scheme is a simple abab, cdcd, efef and ghhg. The rigidity of the scheme allows the poet to focus on the event rather than on the emotions or the feelings of the poet. The movement of the snake is copied in the movement of the lines and the sibilants evoke a slithering sensation.

Alliterative and sibilant sounds as in “sun glazed his curves of diamond scale”, “we scarcely thought; still as we stood” convey the impression of a slithering movement of the snake as it moved fast over the grass. These devices continue to relate to the relationship that humanity has with nature: we should respect nature, the natural world and the people who live in it.

Through an extended metaphor, the poet tells us of the symbiotic relationship between the snake and man. There is no maudlin talk about the prey or the cruelty of the snake as a hunter but merely an acknowledgement of the sense of purpose behind the movement of the snake. Mainly, Wright depicts this symbiotic relationship so that man reflects upon his treatment of a) the natural world around him and b) the indigenous people group found in a country. 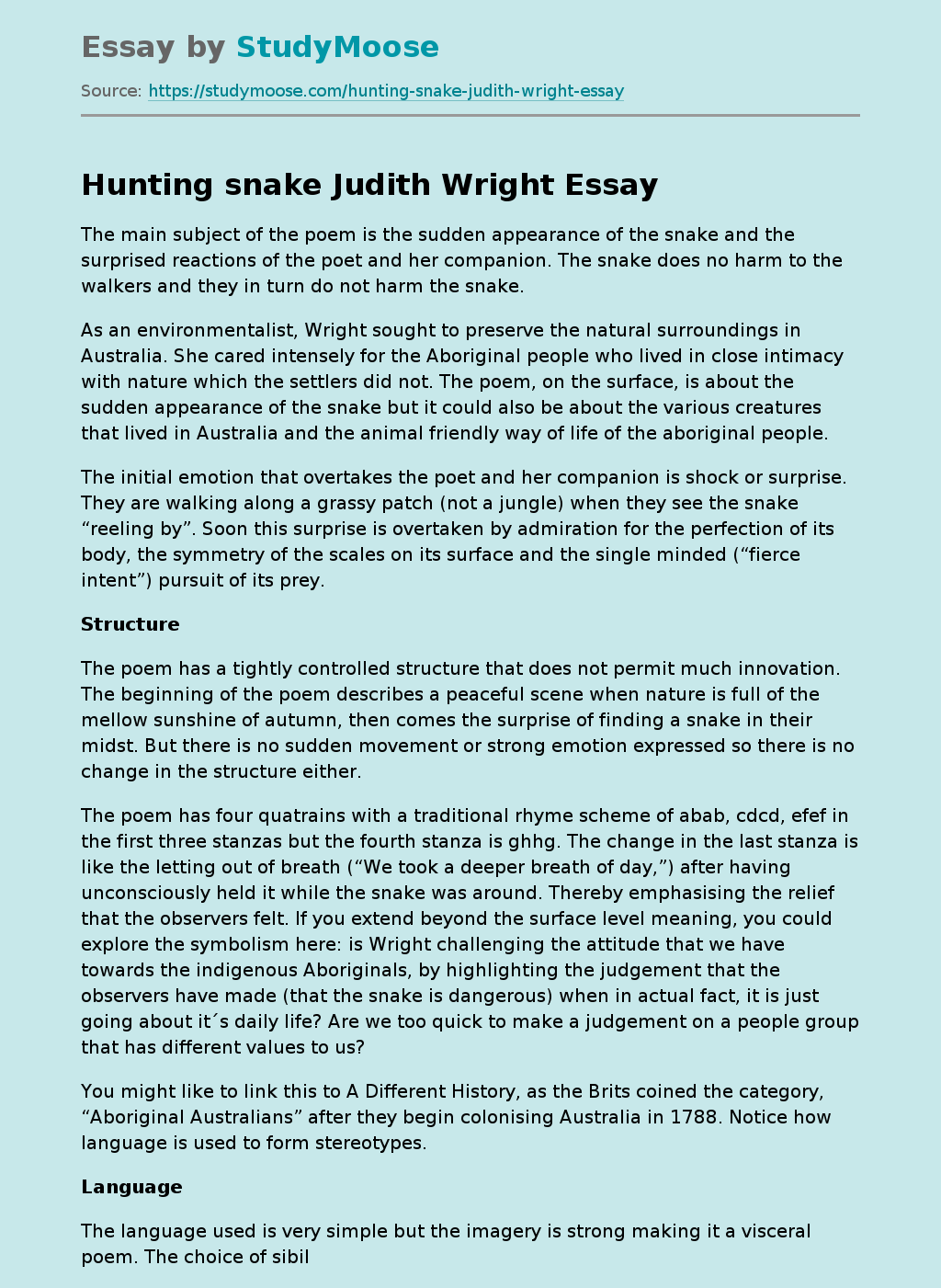