Tomorrow When the War Began

As much as I hate to start an essay with a personal pronoun, I must as the topic is all a matter of opinion. I believe that Homer is the most interesting character in the novel, Tomorrow When the War Began. Throughout the novel, many aspects of his personality and looks are described. It is shown that: Homer has a Greek heritage and a rough, extreme personality; he is attractive and physically skilled; the way in which he views females changes throughout the novel; the war cultivates his strengths; and he motivates and is very encouraging towards the other characters in the novel when they are struggling.

Homer’s most apparent features are his Greek heritage, which he is very proud of, and his daring rebellious personality. One of the many references to his Greek heritage in the novel is on page 95. This is where the group of teenagers have a loud argument in which nobody is listening to each other and they are all yelling.

Homer throws a coffee mug at the fireplace to get their attention. He then explains that it is a Greek custom. Page 97 contains another moment where Homer refers to his Greek heritage; here he says “the Greek side of me understands these things.

The ‘these things’ he is referring to is the way war changes normal rules of behaviour. Along with his rebellious personality, this aspect of his identity makes him quite an interesting character. “He didn’t care what he did or what anyone thought.

” It seemed to Ellie that Homer was always getting into trouble. Ever since they were little kids Homer had been boisterous, at home and at school. Proudly Greek and uncontrollably seditious, Homer stands out as a character in John Marsden’s engaging novel. As well as his Greek looks, it is revealed that Homer is attractive and physically skilled.

Both Fi and Ellie are attracted to Homer, but in different ways. Ellie thinks of Homer as a brother, she has known him for most of her life. This is why she is so confused about how she feels about him. Ellie finds it more physical attraction than anything. In the novel Ellie explains her attraction to Homer, she also says `overnight he’d become sexy and interesting’ (pg. 195). Fi, however, finds her attraction to Homer both physical and emotional. Fi says on page 93, “I love it. Greek is sexy. ” Homer and Fi make for a very interesting couple.

They are almost opposites. Fi comes from a wealthy background and is posh and petite. Very unlike Homer who is defiant and rough. The pair is very different and it is really intriguing to see their relationship change throughout the novel. The different relationships Homer has with both Fi and Ellie make him a very interesting character. Even though Homer is both attracted to and attractive to the opposite gender, his approach towards them changes throughout the novel. At the beginning, before the war, he would make sexist, offensive remarks and jokes towards females.

Ellie writes about how Homer would sit back in class and encourage girls to criticize him. In the novel there are many occasions in which Ellie refers to Homer being unable to have emotions. Homer used to say that he was too tough to have emotions. On page 44 Ellie explains how surprising it was to see Fi have the effect she had on Homer as Ellie never thought Homer would ‘fall in love’. In the end, Homer even says ‘I love you too’ to Fi in front of Ellie and her companions. This is another aspect of why Homer is quite an interesting character.

When it comes to Homer’s emotions, he never seizes to surprise Ellie. An admirable characteristic of Homer’s personality is that he motivates and is very encouraging towards the other characters in the novel when they are struggling. Even in high pressure situations, Homer tries to keep everyone’s spirits up and make them laugh. Often throughout the novel Homer encourages and motivates everyone when they feel overwhelmed by their situation. When the group was hiding-out in the public toilets, Homer attempts to make everyone loosen up and relax by vandalising the wall of the bathroom with ‘Wogs rule’.

Another incident to do with the public toilets in which Homer tries to make the group of teenagers laugh is on page 99. This is where Homer tells the story of hiding in the toilets to the rest of the group. He makes it an amusing story to get everyone laughing. Often throughout the novel Homer encourages and motivates everyone when they feel overwhelmed by their situation. Ellie says on page 104; Homer was becoming more surprising with every passing hour. It was getting hard to remember that this fast thinking guy, who’d just spent fifteen minutes getting us laughing and feeling good again, wasn’t even trusted to hand out the books in school.

Even in high-risk, dangerous circumstances Homer is able to normalise the situation by cracking a joke or two. For instance on page 149 Ellie writes; ‘the BMW was flying. It was a dirt road but straight and smoother than most. ‘Nice car’ I said to Homer, glancing at him in the rear vision mirror. He gave an evil grin. ‘Thought I might as well get a good one. ’ This feature of Homer’s personality makes Homer an interesting, amiable character. At last, the most momentous point about the character, Homer, is that the war cultivates his strengths and makes him more mature.

Before the teenager’s lives were changed forever, Homer was somewhat immature. Ellie refers to a time when Homer climbed out of the window and went down the drainpipe at school, (page 108). That is just one example of the way in which Homer was immature before the war. Some other examples are; when Homer threw brussel sprouts at his mother in refusal to eat them, removed workmen’s ladders and played Greek roulette (a game made up by Homer himself where classmates would take turns head butting a window, and whoever broke the window would have to pay the bill.

Ellie describes other examples of how Homer matures after the war begins. When the group are at Corrie’s house and a helicopter flies over, Homer takes the lead and gives out the orders. Instinctively, he knows what to do and how to best manage the situation. On page 111 Ellie describes Homer’s leadership, she says “That was Homer’s genius. He combined action with thought, and he planned ahead. ” Homer is often the character who thinks of the solutions to the problems they encounter. When everyone is confused and upset, Homer suggests that everyone get a pen and write down what they think they heard.

Lee describes Homer as a “pretty smart guy” (pg. 152) Homer is a quick-thinking guy. He is able to deal with pressure and also able to carefully plan things out. On page 122, Ellie writes “Homer is able to put himself into the minds of the soldiers, to think their thoughts and see through their eyes. ” To survive as resistance fighters, Homer gives the group some motivational talk and guidance. He says; ‘We should set ourselves up as a real guerrilla outfit, living off the land as much as possible, mobile and fast and tough. At one point in the novel, five pages are used to describe Homer’s elaborate plan to blow up the bridge to Cobbler’s Bay. The bridge to Cobbler’s Bay is used by the invading enemy to transport all of the opposing side’s supplies to other parts of the country. Homer’s plan is to blow up the bridge to provide some real resistance to the enemy attack. The plans that Homer makes shows that he has the ability to think, observe and calculate in tactical ways. He has many skills useful to fighting a war. The war cultivates his strengths and skills. Homer becomes an unspoken leader of the group.

The way his maturity develops in such an unexpected way, makes Homer an even more interesting character. Homer Yannos, a character in John Marsden’s novel, Tomorrow When the War Began, has many interesting features. As stated in previous paragraphs, Homer is Greek, rebellious and outrageous; attractive to girls; attracted to Fi; encouraging and supportive to the other members of the group; and he develops from being immature to becoming responsible and reliable. He is a much needed member of the group. He is a congenial rogue. In general, these things contribute to making Homer the most interesting character in the novel.

Tomorrow When the War Began. (2016, Oct 21). Retrieved from http://studymoose.com/tomorrow-when-the-war-began-2-essay 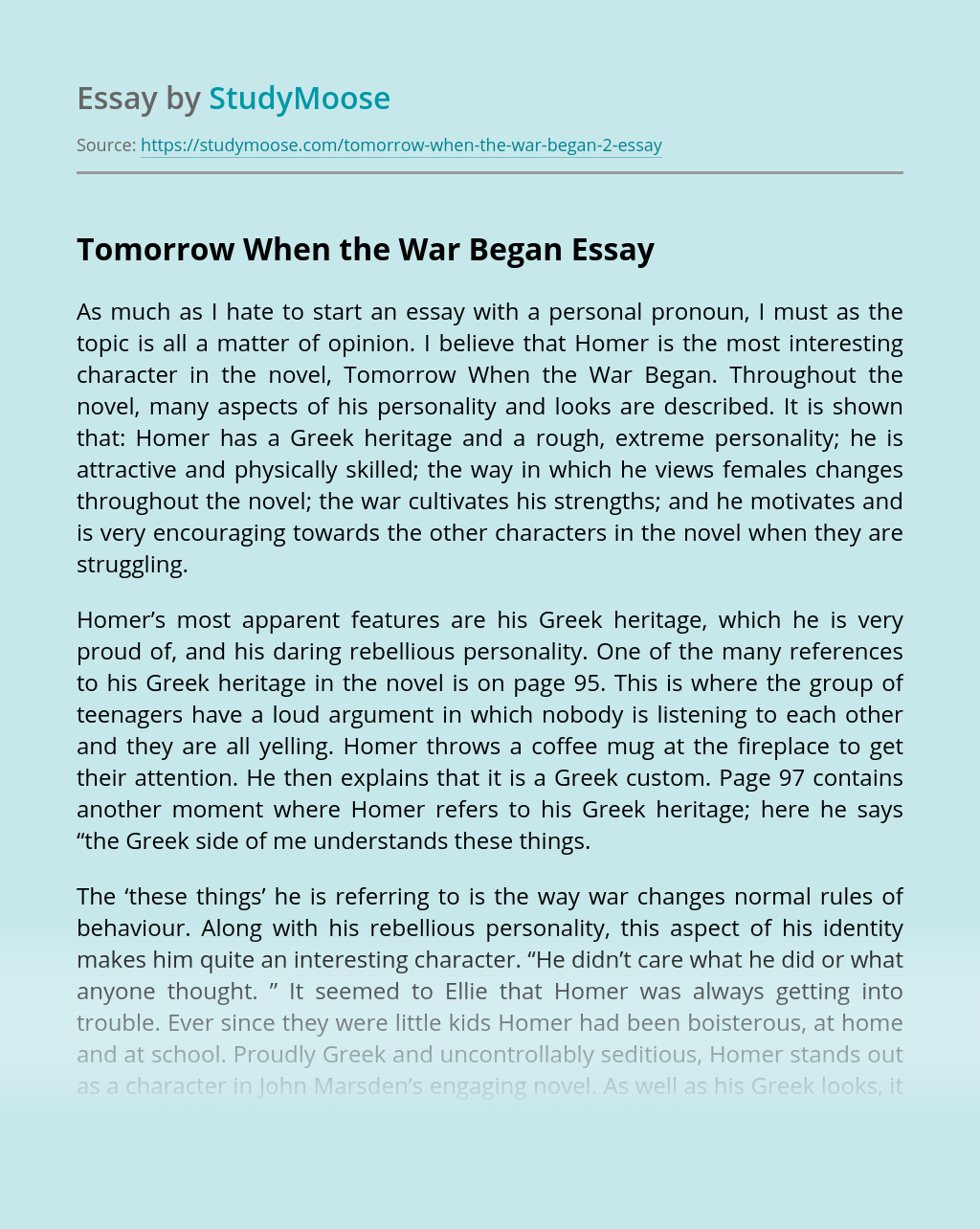 Don’t waste time
Get a verified writer to help you with Tomorrow When the War Began
Hire verified writer
$35.80 for a 2-page paper
Stay Safe, Stay Original