I Know that the sun will rise tomorrow morning

Couldn’t this be counted as factual proof that the sun will rise tomorrow? During the past 16 years of my life, I have never encountered a day when the sun had not risen to welcome me for another, beautiful, granted day. Nor has any other human being, dead or alive. I think it is safe to say that life’s processes, its patterns, this one anyway, will not change for another zillion years to come. Take note, I am not suggesting that I know the sun will keep on rising every morning.

Don't use plagiarized sources. Get your custom essay on
“ I Know that the sun will rise tomorrow morning ”
Get custom paper
NEW! smart matching with writer

I am merely stating the fact that I know the sun will rise tomorrow morning. Inductive reasoning allows me to come to this very conclusion.

Because of my own experience with the sun, added with experience of every single human being that has/is tread/treading this planet, I can conclude that the sun will rise tomorrow morning. David Hume, a Scottish philosopher, once stated, “Induction is based on experience.

” The most straightforward way to approach this statement would be the use of scientific evidence. Scientists have concluded that, instead of the planets and the sun rotating around the Earth (like medieval, religious philosophers had concluded), the Earth, along with all the other planets in the solar system, rotate around the Sun.

We are, half of the day, exposed not to the suns rays, and the other half exposed to the sun’s rays, which creates day, and night, inevitably.

This is exactly why the North and South Poles are always blanketed over a think layer of ice, for it doesn’t get exposed to the sun’s powerful rays as much as other places do on the face of the Earth (in fact they don’t get exposed to sunlight for 6 months during the period of one year, but that can be explained logically by angles the positioning of the Earth). Hence, depending on where you are on the Earth, the times at which the sun will rise will differ, but the sun will always rise no matter where you are.

Rational accounting and science can help us proceed closer to that shaded answer in the distance, whilst providing even more evidence to prove that the sun will rise tomorrow morning. Human beings constantly question everyday transactions, whether that is a certain action, or a sentence long statement. The ability to question our inner thoughts is crucial, for it is what makes us human. No other animal can rationalize like we do. For this matter, we must question the belief that the sun will rise tomorrow morning. How may we come to refute this belief?

One may have learned in Mathematics class, that the probability of something occurring is never zero. The word “never,” in this context, is perfect because it is certainly “never. ” So why, one may ask, that with the sun’s detrimental 6000 degrees-Celsius core, is it said that the sun will not explode in our life time, let alone tomorrow? Scientists say that it will happen during the course of 5~6 billion years from now. Wouldn’t tomorrow be included within the time span of “during the course” of 5~6 billion years from now? Hence, what would the probability of the sun exploding before sunrise tomorrow morning be?

All we know is this: Certainly not 0%. The number could be very close to zero, but it will not be zero. That alone is enough evidence to refute the simple belief that the sun will rise tomorrow morning. Who knows if the sun will be sucked mercilessly into the dark hells of the black hole? It probably won’t happen, but it could. This is inevitable. Another slight possibility is that the media was lying to us the whole time. Sure, the media lies to us viewers all the time, whether that is through domestic complications, and/or patriotic cover-ups (we’ve seen this innumerable times during the course of our history).

How do we “know” that we have been lied to all this time about the sun’s existence? Who knows, maybe all the governments in the world came together and decided to plant a massive, ultra-beam satellite into the skies, and with one switch of a button, the light rays could be switched off just like a light bulb. Now the possibility of this being the truth is incredibly low, as many would agree, but is definitely not zero, for we civilians have never looked up there to see for ourselves if that’s the ultimate truth or not.

I know the sun will rise tomorrow morning. However, there are other things in life we think we know, but if thought about thoroughly, can be easily questioned. Thus it is important for us to analyze how we came to know such fundamental, but fascinating verities. Many forces that have come from our society, our experience, our instinct, have influenced us to become “knowers” of particular beliefs, or ideas. These forces can ultimately shape who we really are, and what we indisputably know. Harry O’Sullivan.

I Know that the sun will rise tomorrow morning. (2020, Jun 02). Retrieved from https://studymoose.com/know-sun-will-rise-tomorrow-morning-10365-new-essay 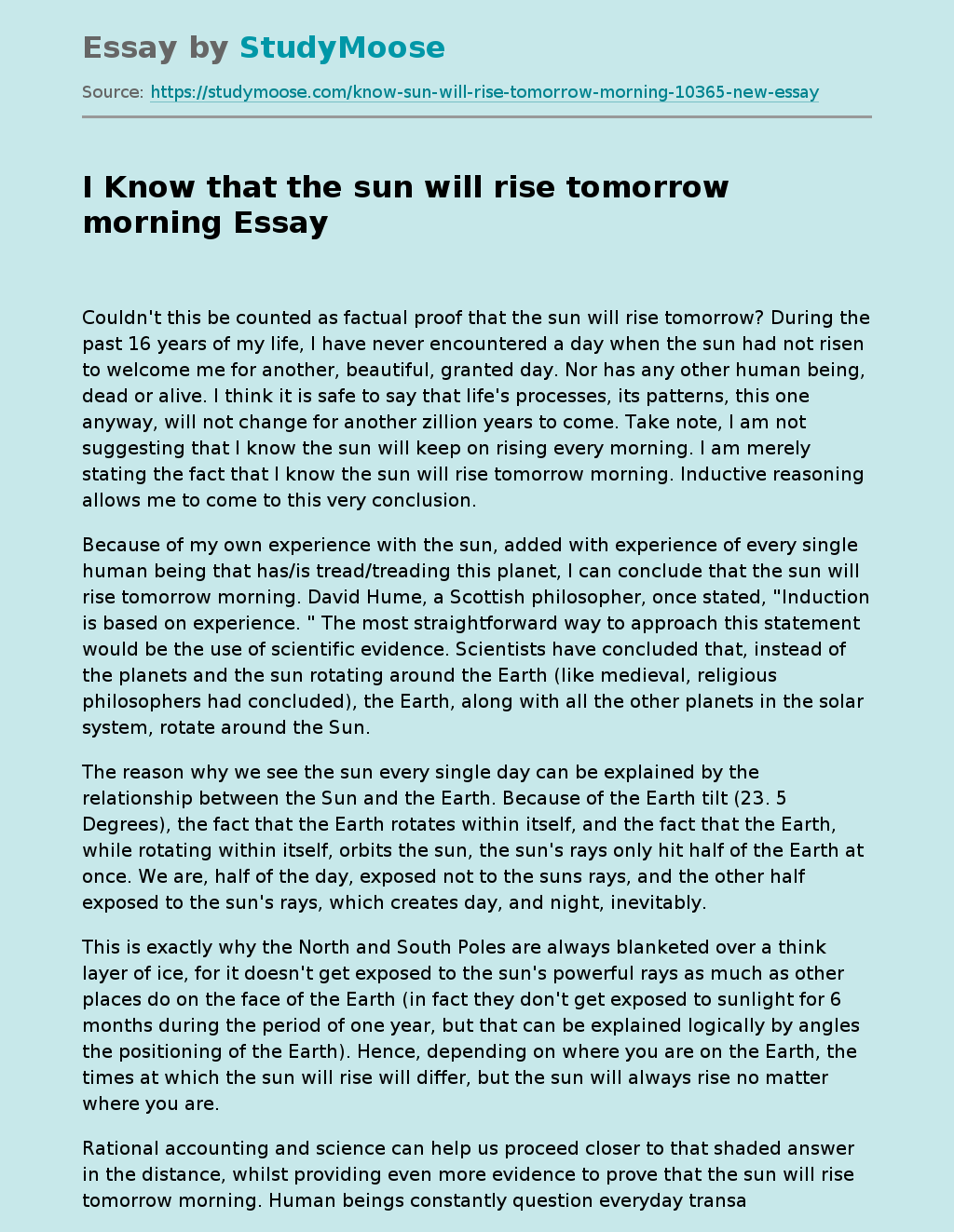