Tomorrow when the war began

In the novel; ‘Tomorrow when the war began’, the characters experience various changes and transformations. These changes occur when the different characters experience life threatening situations and environmental change. The characters have to adapt, think and behave differently. The changes that occur involve the themes of leadership, war and love. Throughout the novel, John Marsden shows change in Ellie. In the beginning Ellie is a carefree but hard working girl and known as a bit of a tomboy.

As the war begins she realizes she needs to grow up and mature quickly.

Don't use plagiarized sources. Get your custom essay on
“ Tomorrow when the war began ”
Get custom paper
NEW! smart matching with writer

Ellie went camping with her friends in Hell and was not worried or expecting anything. This is how Ellie was carefree in the beginning. Ellie became strategic when she saw what was happening at the show grounds by delegating people to certain jobs and roles. At the show grounds Ellie says, “I felt then, and still feel now, that I was transformed by those four steps.

At that moment I stopped being an innocent rural teenager and started becoming someone else, a more complicated and capable person.

Proficient in: Tomorrow When The War Began

A force to be reckoned with… not just a polite obedient kid. ”This quote shows us that this was the turning point where Ellie experienced major change and started thinking rationally. She developed and showed leadership. In the novel, the characters had never faced a war situation they did not know what to do or how to react. As the novel progresses, the characters strategies change, as does their perspective on war.

“A month ago we were average teenagers… now we’re soldiers, we won’t run, we won’t hide, we’ll fight and keep fighting, and never give up, until this war is finally won. ” This quote by Ellie shows courage, strength and maturity. Throughout the text there many important references that relate to war countries now, where homes are being invaded and teenagers and even adults have to, “start thinking like soldiers”. This quote was said by Ellie and it again shows maturity and her realising that if they ever want to see their family again, they are going to have to fight and save their town.

Chris falls asleep while keeping watch and Ellie freaks out, this is an important turning point in the text, this is when the teens really realise that this is war and they must fight if they are to survive. This is how the characters perspective of war changes and how the theme of war is explored in the novel. Throughout the text John Marsden describes relationships of love, friendship and hatred. Love is shown through the relationship that exists between Homer and Fi. In the text the teenagers are playing in the water and Homer gets distracted by looking at Fi.

In the beginning Homer is immature, a loud mouth, disrespectful, a troublemaker, wild, crazy and many others When Homer meets Fi and falls in love with her, John Marsden shows a change in Homer to one of thoughtfulness, maturity, bravery and he shows emotion and compassion in Homer. This is how love is shown between Homer and Fi. The text explores the theme of friendship between all of the teenagers. When they have to fight and look out for each other they form a strong bond, they are like family to each other.

“At that age you think boys have as much personality as coat hangers and, you don’t notice their looks. Then you grow up. ” This quote means girls may not like boys, for example; Robyn and Homer are completely different. Robyn is a very polite and religious person and Homer is a bit of a wild pig, but in the end of the text the characters change, they look out for each other like they are family. Hatred is also described in the text when group of teens are fighting against the army and Corrie gets shot. The teenagers then feel hatred towards the soldiers because one of their closest friends could die.

This is how the relationships change between the characters. The novel discusses and how tough war is and how hard others would fight for each other. Throughout the text we see how towns are invaded and families are torn apart, in some countries like Afghanistan for example, things like this still happen and it needs to stop! Leadership, war and love are some major themes that are described in Tomorrow when the war began. This text tells us to be courageous and if anything like this ever happened in Australia we would need to work together to survive. 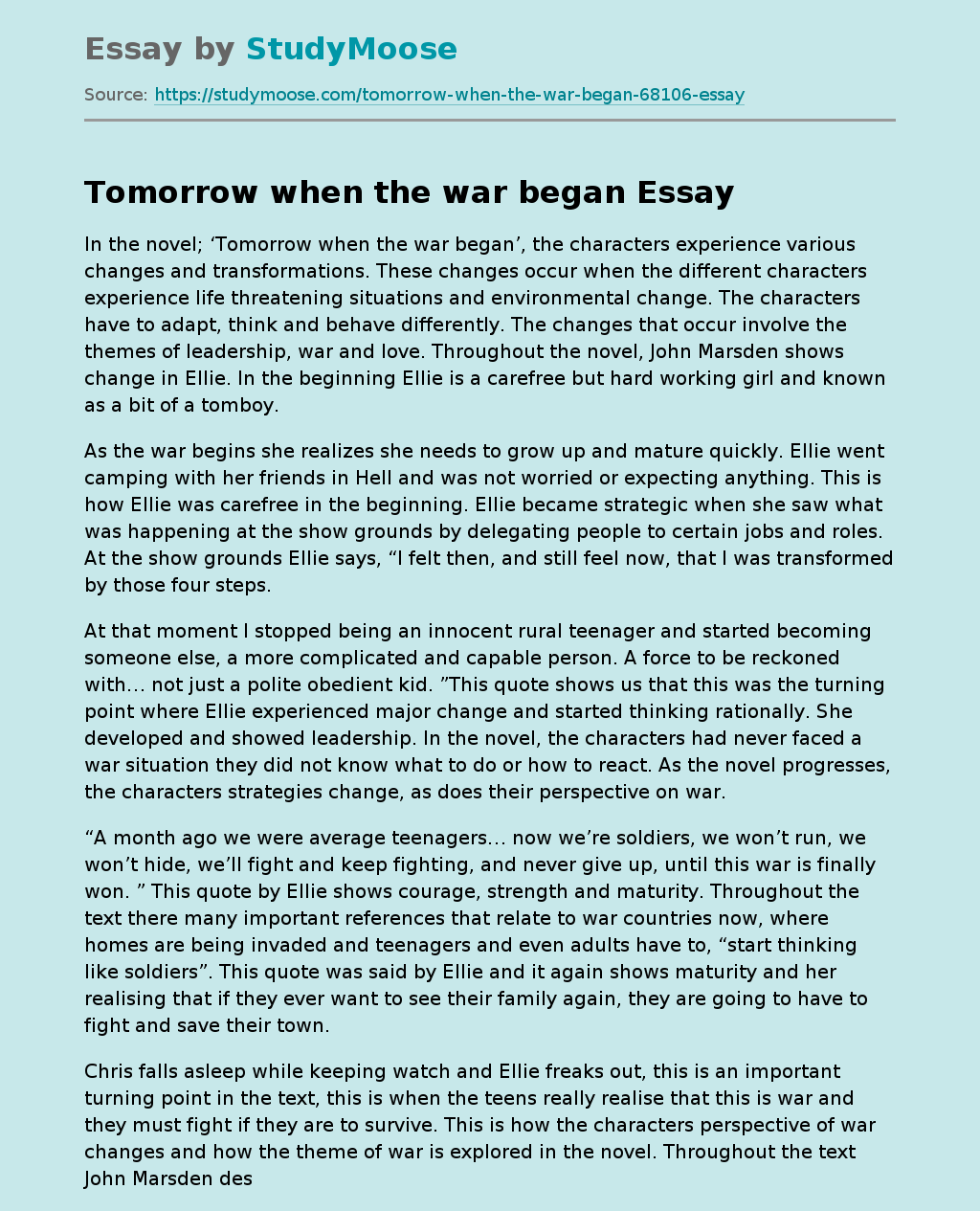