3. In many works of literature, past events can affect, positively or negatively, the present activities, attitudes, or values of a character. Identify a character in The Great Gatsby who must contend with some aspect of the past, either personal or societal. Then write an essay in which you show how the character’s relationship to the past contributes to the meaning of the novel as a whole. In F. Scott F’s novel, Jay Gatsby contends with a haunting past that constantly threatens his dream of a future with Daisy.

Gatsby’s future, as said by his father, to be one of promise.

Gatsby’s father states “He had a big future before him… “, and Gatsby has the brain power to be successful. In Gatsby’s life itinerary, it shows that he keeps an eye on his goals, is eager to get ahead and, in fact, has a plan to achieve his goals. But the one goal Gatsby does not achieve shows that he has “paid a high price for living too long with a single dream”.

Gatsby’s dream is to make what has already past, his future, and his dream is just out of reach. As a result of living in the past, Gatsby limits his future and is doomed by a single kiss, which is his only tragic flaw.

Looking at Gatsby’s past it is clear, that he doesn’t start of as a successful man. He has nor money nor education, but a humiliating janitorial job and dreams of being a wealthy man.

When he meets Cody, Gatsby falls in love with wealth and luxury. He dedicated himself to become a successful man, and changing his name to Jay Gatsby gives him a good start to reaching his dream. When Gatsby meets Daisy, it is obvious why a man who has gone to such great lengths to achieve wealth and luxury would find Daisy so alluring: for her, the aura of wealth and luxury comes effortlessly.

She is able to take her position for granted, and she becomes, for Gatsby, the epitome of everything that he invented “Jay Gatsby” to achieve. Gatsby suffers from past memories of Daisy and tries to relive the relationship by turning present into past. As Nick states: “Almost five years! There must have been moments even that afternoon when Daisy tumbled short of his dreams – not through her own fault, but because of the colossal vitality of his illusion”. Gatsby’s idealistic view of Daisy is the pure and perfect form, and after he kisses her, his ideal perfect relationship starts to decay, “…

and the incarnation was complete”. The narrator uses the word “incarnation”, meaning that Daisy cannot be ideally perfect anymore, now that she is in Gatsby’s company. Daisy is not pure and perfect like Gatsby, thought she was in the past. From Gatsby’s illusions of the past occupying all his thoughts, he forgets about the key dimension he exists in, which is the present. Although Gatsby is determined on reliving the past, he vaguely lives for the present. This becomes evident when he abandons his biological identities by leaving home, changing his name, and leaving his heritage behind, which is not done by following the past.

In the past Jay Gatsby makes, “… a platonic conception of himself”. What Nick says about Gatsby’s platonic theory of himself, is that Gatsby “… was a son of God”. From Jay Gatsby’s theory he makes a ideal conception of himself, of which he projects himself into the future. Ultimately Gatsby is left with the choices to “… suck on the pap of life, gulp down the incomparable milk of wonder,” or kiss Daisy and “… his mind would never romp again like the mind of God”. In Gatsby’s choices he is to climb “the ladder” to God which represents Gatsby’s future, or choose Daisy and live the past.

Since Gatsby idealizes that the past could be his future, by kissing Daisy, he is leaving his past, ideal platonic conception of himself, by choosing not to have his mind think like the “mind of God”. In conclusion Jay Gatsby’s starts to make his future from his present, even though he is still stuck in the past. Time is a key dimension in the novel’s theme and it plays a key role in Gatsby’s life. Gatsby is living in the past and when he comes to the present, he is no longer there. The American dream has a tendency to overstate the past and project into the future.

Preoccupying Gatsby with what the past represents, doesn’t give him a chance to grasp reality in his over powering ideals. Time can be seen as a major theme of Great Gatsby, which emphasizes particularly on the main character Gatsby. The time in this novel flows evenly but is broken into the past, present and future. Since we only live in the present, and constantly dream of our futures and, when we try to live in the past it restricts the future. Throughout Fitzgerald’s novel, Gatsby wastes his time and his life for a single dream, and it is his illusion of the ideal future that makes time a key dimension in his life. 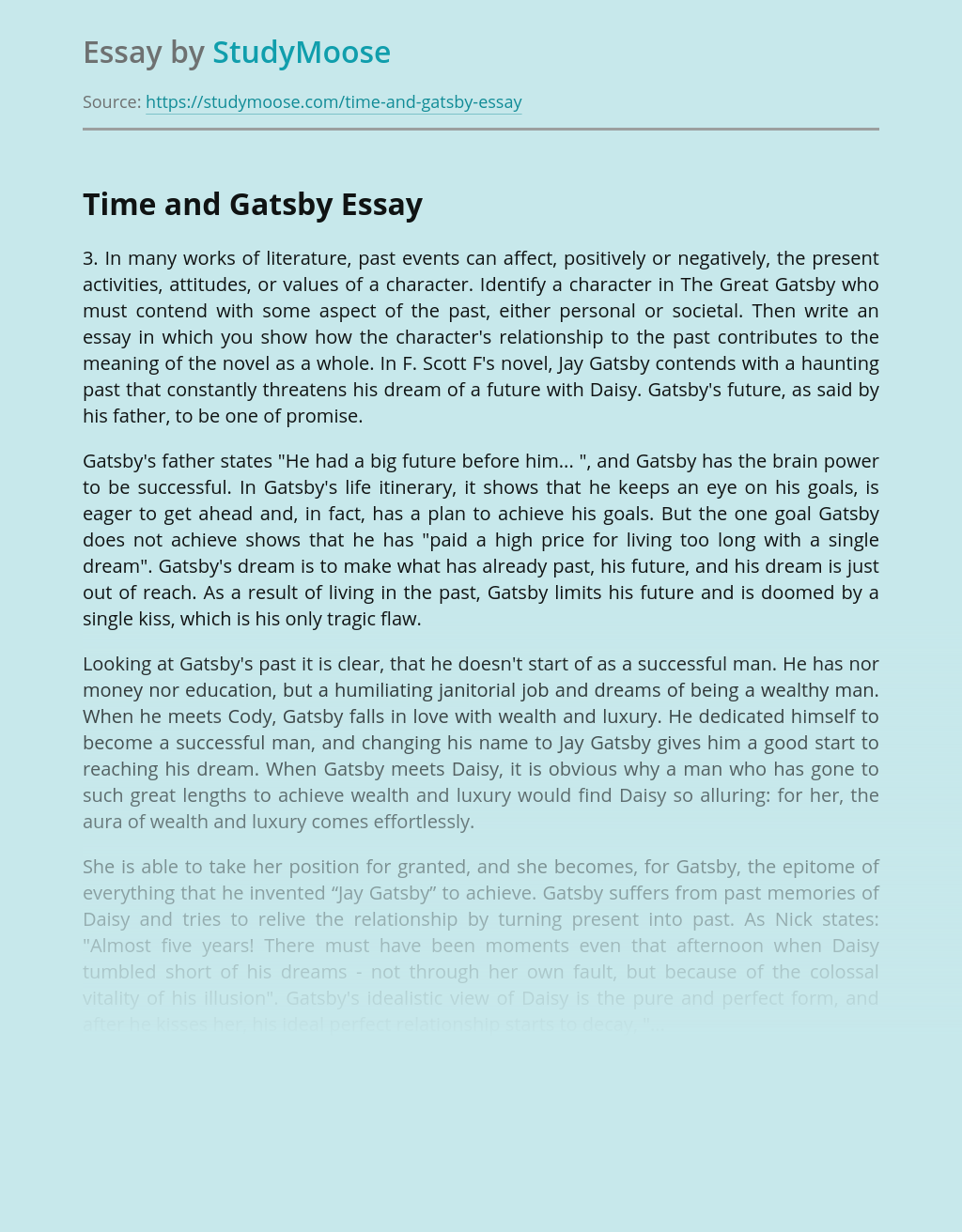