77 Billion People on the Earth

There are approximately 7.7 billion people on the earth (Worldometers.info, 2019) and each person is unique. We each have our own individual identity which defines the person who we are, what interests us, what we believe and what and who we associate with. Psychology Today tells us that identity relates to our basic values that dictate the choices we make. These choices reflect who we are and what we value. (Psychology Today 2019). According to the Advertising Association of the UK, advertisements are messages paid for by those who send them and are intended to inform or influence people who receive them.

Don't use plagiarized sources. Get your custom essay on
“ 77 Billion People on the Earth ”
Get custom paper
NEW! smart matching with writer

(The Economic Times 2019). In this assignment I’m going to explore the argument that advertising affects who we are and whether or not we really do have free choice on what we decide with regards to consumerism.

‘Advertising pops up everywhere, on the street, in our communication, and even in our homes. There is no doubt advertising influences our culture, which in turn influences us.

’ Richard Pollay (1995). We are constantly surrounded by advertising through many forms; television, newspapers, magazines, billboards, and radio adverts. The advertising can be both subtle and obvious. Adverts command our attention everywhere we go, when we are at home relaxing, engaging in activities and hobbies, shopping and even on our jouncy to work “In one 45-minute journey, the average London commuter is exposed to more than 130 adverts, featuring more than 80 different products.” (Gibson, 2019). Even when we are browsing the internet and social networking, eye-tracking software now exists and we are targeted with banner ads appearing on our screens, attempting to persuade us to click on the link and look at the retailers website and purchase the product or service.

‘Eye-tracking software technology has meant that advertisers can now place adverts on web pages in locations where they think people will look and that will attract attention. (The Open University 2017 p. 194). Another method advertisers use is the ‘mere exposure effect.’ This effect uses repetition and familiarity. Every time we are told or shown something we become more likely, with each repetition, to believe it, and have a positive perception of it. (Cho. (1999) cited in the Open University (2017) p. 195).

According to Zukin ‘Advertising and marketing may seduce customers into connecting their practical requirements to the emotional needs and wants that stimulate the desire for products.’ (Zukin, S. (2004) cited in The Open University (2014) pg. 92) Advertising aims to create a captivating and pleasing lifestyle image, which is much more then the actual product or service. The result is people purchase the product or service to express themselves in order to create an identity they aspire to. People trust that they need the product or service that is being advertised to convey a certain social status. ‘By developing and using brand identity, retailers and advertisers actively encourage consumers to creatively imagine themselves in relation to particular products and services.’ (Understanding Social Lives 2014). Advertising has hugely contributed to creating a consumer culture in our society. Van Thompson describes consumer culture by stating that it ’emphasises the sociological and psychological impacts of buying and spending behaviours. The desire to keep up with ones neighbours or peers, the belief that purchasing a new gadget or other piece of merchandise will improve quality of life.’ (What is consumer culture? 2015) Advertisers use celebrities who many ordinary people aspire to be like, and pay them to endorse a particular brand leading to the target audience believing that the product will change their social status.

However, whilst some of do have the available resources to engage in this consumer culture and create our desired lifestyles, some of us do not. Zygmunt Bauman places people into one of two categories – the seduced, and the repressed. The seduced are the people who are able to engage in consumer society through available finances, and are manipulated into doing so through powerful advertising techniques. The repressed are those who financially are unable to take part in this consumerism, whether it be, for instance, through lack of income or disability. As a result, the repressed can end up feeling devalued. The amount of income people have at their disposal is key to how we are able to express our own identities through consuming what advertising persuades us that we need to be the person who we want to be. Social status is now measured by what possessions we own, and advertising exploits this. Advertisers actually use a term called ‘seduction’ and it is a technique where they create a demand for a product that isn’t actually crucial to our lives. Zukin echoes this suggestion and states ‘The term ‘seduction’ in advertising refers to the act of advertisers encouraging consumers to purchase things that they may not normally have bought. (Zukin, S. (2004) cited in The Open University (2017), p. 213) The supermarket giant Tesco provide us with a perfect example of this with their ‘Price Match’ scheme. They claim that all of their products are either the same price as, or cheaper, then their competitors, and therefore instigate the belief to their customers that they are able to purchase even more products with the money they save through the scheme. Kotler, P. (1974) argues that the advertising industry use ‘atmospherics or ambience’ to guide customers. Advertisers completely control the store environment through layout, music, colours, temperature, and space with the goal to attract consumers to noice things they wouldn’t otherwise have looked at.

Bauman also argues that we no longer live in an industrial society, where we previously identified ourselves by class, wealth and occupation. We have now turned into a consumer society where our possessions and what we are able to buy are now what defines us. (1988) cited in Understanding Social Lives (2014) p. 125) Previously it was only the wealthy that could consume whatever they wanted, however, in modern society, credit is available to many of us, enabling us to buy the things we want. The inequality has simply been remade and as as a result, people find themselves struggling with debt, and consequently people find themselves having to work harder and longer to pay for this type of lifestyle. People are expressing their identities through what products and services that they are able to purchase. Advertising can exploit this and deceive people by giving a distorted sense of what they need, in order for businesses to make a profit by encouraging a consumer society. According to Bauman, people who are unable to buy, because of lack of finances, feel that their identity isn’t as valuable as those who are able to take part in today’s consumer society. (1988) cited in Understanding Social Lives (2014) p. 129). Asda provide a good example of Baumans repressed and seduced theory. The supermarket’s advertisers count on it’s trusted brand name and positive consumer experiences of quality goods at low prices to attract those of us who are on lower incomes but still desire high quality products, which enables the repressed to have similar choices to the seduced . In this respect advertisements allow both the seduced and the repressed a choice.

The concept of positive and zero sum power is supported by social scientists – the outcome of both scenarios is measured by the assets and resources each side receives. Positive sum power is beneficial for both parties and no-one benefits at anyone else expense. Examples of this is the trading of goods and services between nations, which results in mutual benefit, and with regards to the advertising industry, a property developer widely advertising the advantages of construction, resulting in an increase in the availability of competitive prices. However, ‘Zero-sum game is a situation in which one party’s gain is balanced by another party’s loss.”(Hetherington, K. and Harvard, C (2014). A good example of this is on City Road in Cardiff. (····). Colin Buttwell took over running the newsagents from his father in 1965. Supermarket giant ‘s Tesco and Spar, have recently opened up in close proximity. There is now a trend for people to buy most things from supermarkets as they are useful due to many items being under one roof, resulting in cost and time saving, and the super-markets dominating the consumer market. However, for Colin, this trend has had a negative result on his business as fewer customers visit, and he has now been forced to close down his shop. The larger supermarkets have benefited at a smaller newsagents expense.

It is also argued that advertising can actually champion consumer control. With such a wide range of options available to us, this actually encourages our individual creativity, enabling us to express our individual identity even more then we would have been able to, without being subjected to the advertising of these products and services. An example of this widely available choice os self-expression are tattoos and piercings. However, on the other hand, it can equally be argued that the opposite is the case and it is the advertisers who actually hold the power with regards to consumerism. Catriona Harvard argues this case, “we are bombarded with adverts, they play on our emotions. Brands try and lure us to buy into their product as they offer a lifestyle that we want to buy into,’ (The Open University 2017). Additionally Zukin proposes that ‘although advertisements play a role in encouraging consumers to make purchases. It’s important to recognise that this act of shopping has wider societal impact.’ (Zukin. S 2004).

77 Billion People on the Earth. (2019, Nov 26). Retrieved from https://studymoose.com/there-are-approximately-77-billion-people-on-the-earth-example-essay 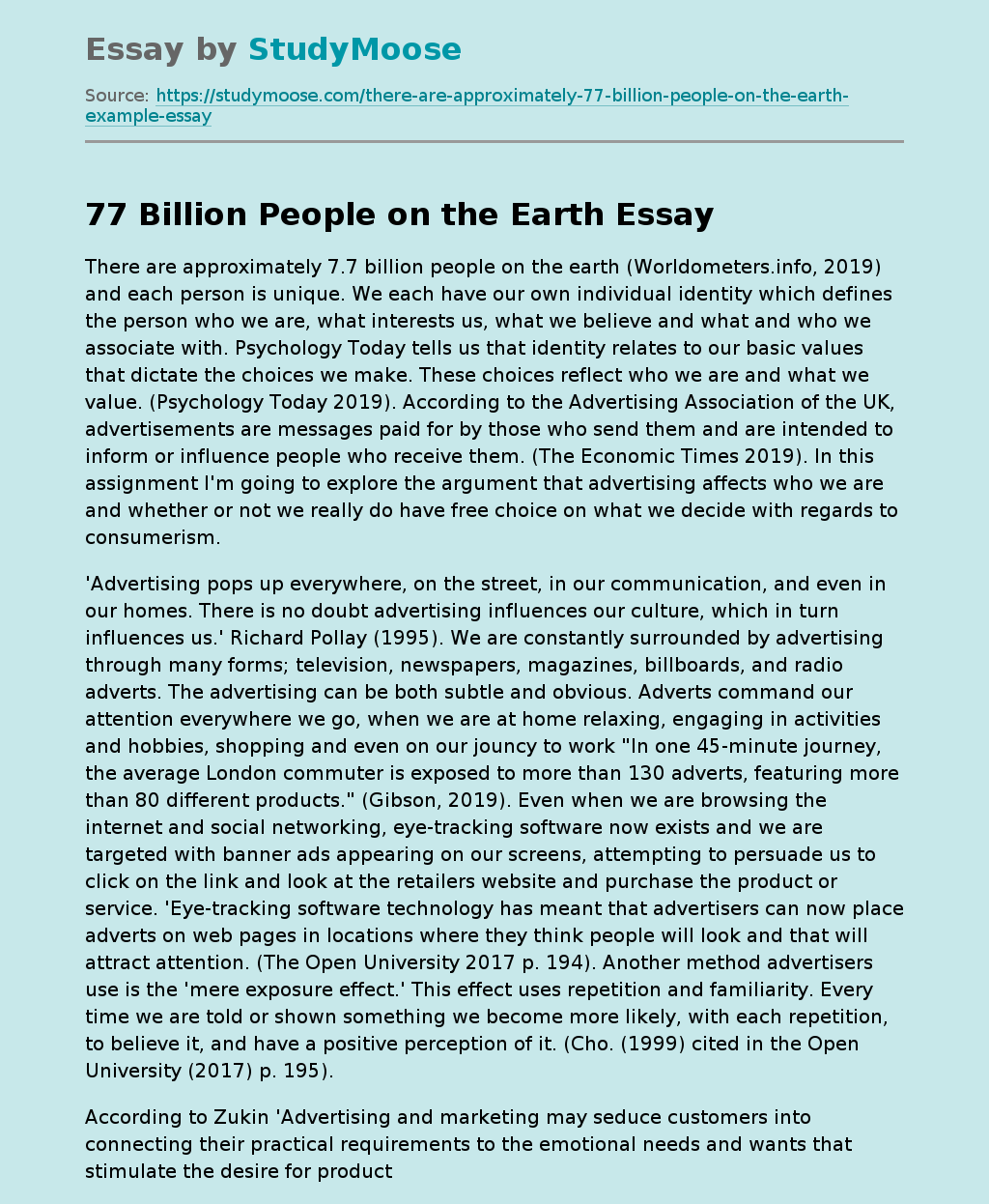