Society often depicts women as weak, inferior, and emotional. Women are not to be taken seriously and are expected to be subservient to men. This is especially true of marital relationships in the 19th century. Charlotte Perkins Gilman explores these gender roles and societal views in “The Yellow Wallpaper.” Gilman’s use of character development, imagery, symbolism, and setting weaves the story through an unnamed woman’s eyes.

Gilman’s protagonist is a wife and a mother. Her husband, John is a physician who appears to be a loving, caring husband who wants the best for his wife.

Don't use plagiarized sources. Get your custom essay on
“ The Yellow Wallpaper Story by Charlotte Perkins Gilman ”
Get custom paper
NEW! smart matching with writer

However, John’s controlling treatment of his wife includes isolating her, patronizing her, and laughing at her nervousness about the wallpaper. He treats the narrator like a child, making every decision for her and completely disregards her wishes. The narrator feels obliged to appreciate John’s care and affection, despite being misunderstood. She plays the role of the submissive wife as is expected of her.

Proficient in: The Yellow Wallpaper

Communication in this marital relationship is neither open nor equal and is rather one-sided as the narrator’s efforts at communicating how she feels are met by her husband reassuring her that she is well. She writes in her journal, “It is so hard to talk with John about my case because he is so wise and because he loves me so” (Gilman 86). This statement affirms the constraints within the relationship and similarly directs attention to the superior-inferior structure of the marriage. On a different occasion, the narrator hints at suspicion of her husband’s actions.

She writes “[He] asked me all sorts of questions and pretended to be very loving and kind, as if I could not see through him.” (Gilman 89). Her comments reveal her frustration with her repressive role and her husband’s dominance.

The setting of “The Yellow Wallpaper” demonstrates Gilman’s use of imagery and symbolism although the effect becomes more and more unsettling as the story progresses. The estate is vast and secluded and “quite alone, standing well back from the road, quite three miles from the village…there are hedges and walls and gates that lock.” (Gilman 81). At first, the narrator believes it is “the most beautiful place” (Gilman 81). But as her seclusion and isolation become more prevalent, the house, especially the room containing the yellow wallpaper becomes sinister and despairing.

In her article, “A Breakdown or a Breakthrough? “Madness” in Charlotte Perkins Gilman’s “The Yellow Wallpaper,” Doris Lessing’s “To Room Nineteen,” and Khairiya Saqqaf’s “In a Contemporary House,” author Hiba Amro examines the similar experiences of the female protagonists of the stories above. Amro suggests the possibility that madness is not entirely a breakdown, but also a breakthrough in the sense that these women eventually end their unbearable existence by embracing madness.

According to Amro, John’s display of his authority over his wife and his infantilization of her are reflected in the fact that insists her room be the former nursery. He further demonstrates this by calling her a “little girl” (p. 86) and a “blessed little goose” (p. 82) (148).

A brief glimpse of the relationship between the narrator and her sister-in-law, Jennie, is also revealed in “The Yellow Wallpaper.” While the narrator is fond of Jennie, she is also aware that she not someone to confide in or trust. Amro describes Jennies as a woman “who has internalized patriarchal ideologies” (147). Jennie shares her brother’s opinion that the narrator should not be writing. In her secret journal the narrator writes that John “hates to have [her] write a word” (Gilman 82). She does not want to be secretive, but simply wishes to avoid John and Jennie’s disapproval. The tension between the two women is apparent in the story. Jennie’s unsupportive attitude not only causes strain between them, it contributes to the narrator’s isolation and depression.

In her article, “Nursery Versus Straightjacket: The Feminist Paradox of “The Yellow Wallpaper,” Ashley Brooks attempts to answer the question, is it better to choose madness over domestic subservience?

Forbidden to participate in anything, the narrator’s isolation and entrapment provoke her obsession with the yellow wallpaper. The creative use of irony and contradiction utilized by Gilman is illustrated in the way the narrator first expresses horror at the wallpaper’s color and design and later, describing it more with fascination and then complete obsession (Brooks 106). The imagery of her hallucinations of “the creeping woman” (Gilman 89) create a disturbing scene. Even more alarming is the realization that the woman is completely losing her mind. But what choice is left for her but insanity?

In addition to being forced to lay in bed and stare at hideous yellow wallpaper all day, the narrator is left alone to deal with her thoughts, her insecurities, as well as her illness. With no support, no intellectual stimulation, or social interaction of any kind, she becomes obsessed with the wallpaper. According to Brooks, “the wallpaper provides her with something to rebel against” (105). In a sense, at least in her mind, the narrator takes back a small portion of her power by freeing the woman trapped in the wallpaper.

What begins as a mild illness eventually spirals into madness once the narrator’s hallucinations completely take over. But she finally feels free. Although still physically confined, one could surmise that her mind is free. She “got out at last [·] in spite of you and Jane!” (Gilman 91). “In the end it is the wallpaper that frees her from her entrapment by driving her completely mad.” (Brooks 106).

Insanity is definitely no way to end a relationship. Nor is it a solution to patriarchal oppression. However, Gilman’s depiction of the descent into madness in “The Yellow Wallpaper” is meant as a warning that insanity may be the only option left for some women in a society or relationship which denies them the right to their own voice, thoughts, needs; forcing them to sacrifice their individuality (Amro 147). 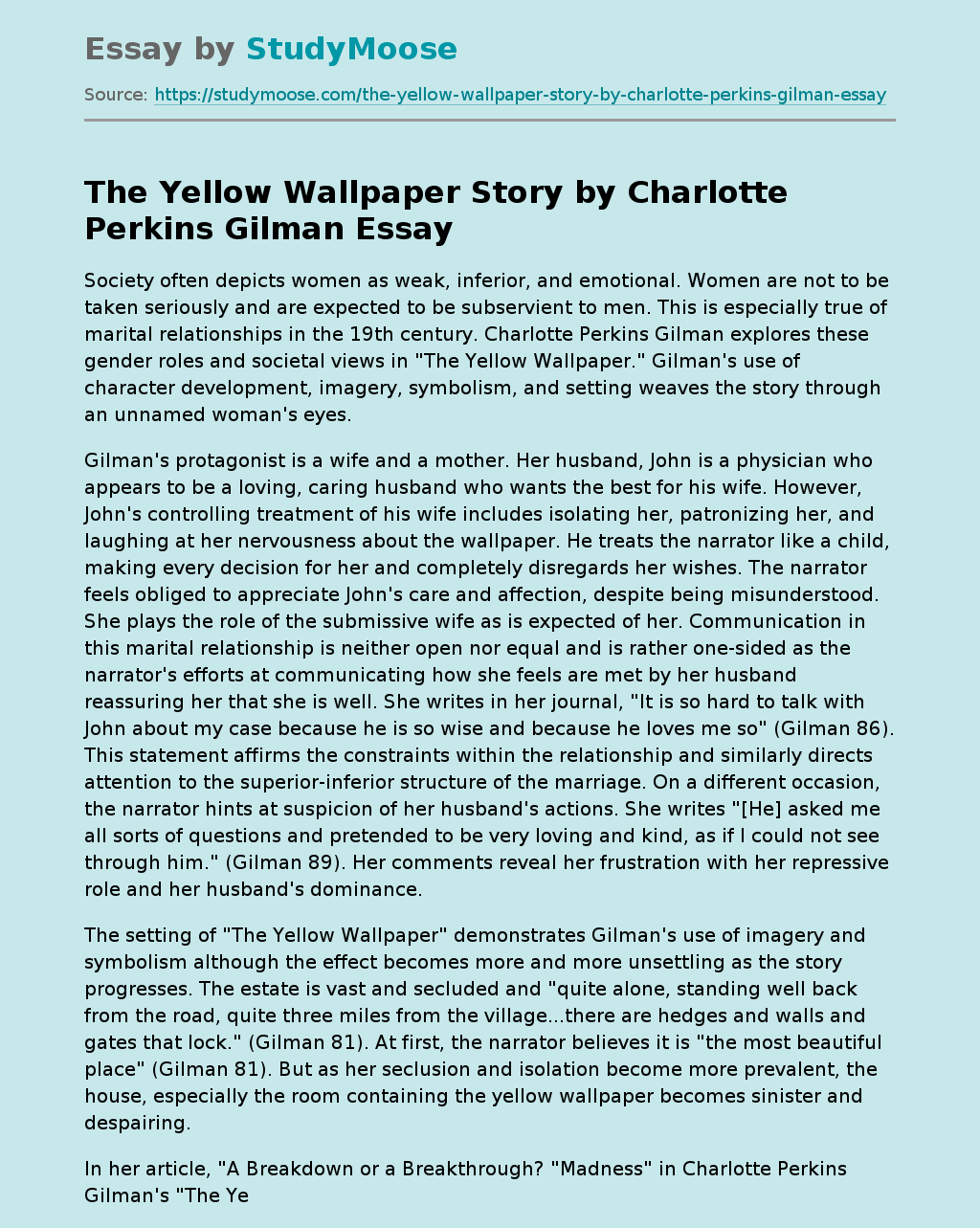