The Wife of Bath's Prologue Analysis

“The Wife of Bath’s Prologue” was a satire written in the fourteenth century in Middle English by Geoffrey Chaucer. At that time, French was the official language of the court and Latin was the official language of the Church. However, Chaucer wrote his epic in English which became accessible to all people. He used bible as a tool to accuse the wrongdoing of people during that time. Although he was living in a microcosmic, patriarchic society, he made fun of men and church which symbolized power.

Don't use plagiarized sources. Get your custom essay on
“ The Wife of Bath’s Prologue Analysis ”
Get custom paper
NEW! smart matching with writer

In his epic, Chaucer criticized the gender norms and purpose of marriage.

Therefore, a lot of people at that time were affected by his thoughts. They believed that the society should be Andro centered.

However, Chaucer was murdered by the king finally because Chaucer refused to obey to the king’s religious idea. In the epic, Chaucer criticized the society by creating the most important character, wife of Bath. She was an outstanding person in ancient times because she did not follow the social and gender roles. In line 1 of “The Wife of Bath’s Prologue,” Chaucer used the word “authority” to symbolize the social and gender norms.

However, he also wrote the word “no,” which showed that the wife of Bath did not only ignore those rules, but also twisted them.

Although marriage was connected to the Church, Chaucer pointed out that marriage might not be what people thought because the bible was left to how people interpret what it meant. From line 36 to 38, Chaucer wrote, “I understand… as often as he! ” These three lines presented the unfairness of marriage and how people’s interpretation towards bible contradicted with bible itself and the actual society. Also, they presented the thoughts of the wife of Bath. Although there was no female authority figure at that time, the wife of Bath tried to compare herself with men.

She used her body as a tool to bargain with men and seek for limited power instead of being powerless. However, being a powerful woman was not always beneficial to the wife of Bath. She chose to obey to her fifth husband because she fell in love with him. This story written by Chaucer made us question the society in the fourteenth century. Living in a patriarchic and catholic society, people were made to follow the rules that were set by the Roman Catholic Church, which led to different social and gender norms.

Because of the Roman Catholic Church, men became superior to women. And, the only freedom of women was to get married. This representation of the fourteenth century society made us realized the interpretation of bible contradicted with the religion itself. Although women can take their victimhood as an advantage to seek power by manipulating men, the author pointed out that love was an actual thing in life that we were forced to like and follow it.

The Wife of Bath's Prologue Analysis. (2016, Oct 04). Retrieved from https://studymoose.com/the-wife-of-baths-prologue-analysis-essay 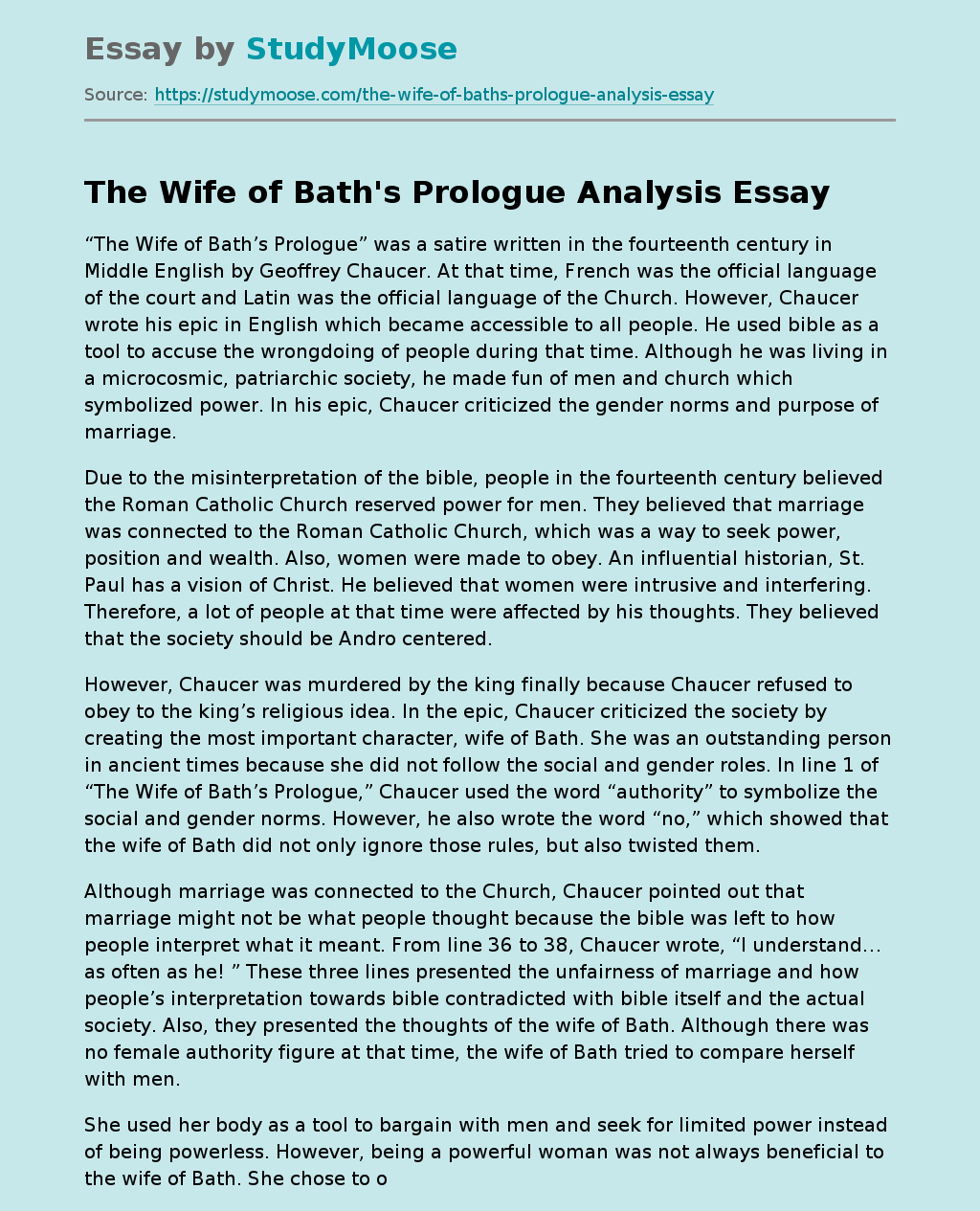