Analysis of Bed, Bath and Beyond Business Success

Bed, Bath and Beyond (BBBY) currently has $400 million more in cash than they need for ongoing growth and operations requirements. While the company is financially sound analysts and investors worry about the company’s capital structure decisions. Investors do not want to see that much cash on the books and worry that the current capital structure is not the most effective for the future. They prefer that BBBY change their capital structure by paying out excess cash and issuing debt.

Don't use plagiarized sources. Get your custom essay on
“ Analysis of Bed, Bath and Beyond Business Success ”
Get custom paper
NEW! smart matching with writer

This could allow BBBY to improve their return on equity and raise earnings per share. Given the low interest rates available it seems like the perfect time for BBBY to add debt to its capital structure. Until now they company has always had a “cash is king, debt is bad” mentality so the decision to add debt is not one being taken lightly.

BBBY has too much cash. Although it has used the cash for store growth and small acquisition, the company should focus on using their cash to increase shareholder value.

3 while the difference from zero debt to 40% debt-to-capital ratio is 0.6. And the diluted earnings per share would only rise to 1.4.

In addition, the actual ROA in 2003 is 13.94 and ROE is 23.21%. With 40% debt-to-capital, the ROA ratio remains constant around 13.23%; however, the ROE ratio grow substantially to 30.46% and even 40.83% in the proforma of 80 leverage ratio. Repurchasing shares with a 40% debt to total capital ratio would achieve the goal of increasing shareholder value. Repurchasing shares with an 80% debt-to-total-capital ratio would also increase shareholder value but with a much higher level of risk. Increasing debt increases shareholder value to a certain point. As this pro forma shows, the point of diminishing return is somewhere between 40% and 80%. In total, 40% debt to total capital gives better return.

The capital market will react positively to BBBY increasing the use of debt to 40% debt to total capital. Many analysts who have been disappointed by BBBY’s structure will be surprised to see the change. The capital structure change will make BBBY become more attractive in the stock market. BBBY has always offered investors a strong balance sheet. The no long-term debt capital structure of the past was a big concern for investors. While BBBY may have been nervous about debt in the past they must recognize that when most firms raise new capital from investors, they do so primarily by issuing debt. It is a very organic growth of company. 40% debt to total capital ratio is a plus for BBBY capital structure. It not only can increase the bond rating of company, but also benefit the company in the long run. BBBY can also add to shareholder value by levering up to the 80% level, but this method has significantly more risk. In our 80% pro forma case we see that the company is able to reduce share count by 47,007.

This represents a repurchase of approximately 15% of diluted shares outstanding. This repurchase, after taking additional interest expenses into consideration should add approximately $.09 to the bottom line. From a valuation perspective if we hold the company’s current Price-to-Earnings ratio (TTM, Diluted) constant at 28.22 we can expect the stock to be trade at $39.58 under the 80% case given the same market conditions. This represents a 7% increase in stock price. Further, the additional leverage and return of excess cash to shareholders will significantly increase ROE. If the market determines that an 80% debt capital structure is feasible for BBBY, then we will expect further capital gains as investors applaud shareholder friendly policies and re-examine EPS estimates. However, if top line growth and same store sales growth continue to trend downward, investors may become skeptical of BBBY management’s ability to continue generating over 30% EPS growth, and thus question the ability of the company to service its debt in the future.

Aside from the two aforementioned proposals the company can raise its leverage in other ways. By conducting DuPont analysis and understanding operating leverage we see that purchasing fixed assets and decreasing stockholder’s equity will raise the equity multiplier and the firm’s operating leverage. In this instance we recommend against this approach as the firm already has a large amount of excess cash above what they require to fund new positive NPV projects and purchase new assets. Investors would rather see their capital returned to them in the form of share repurchases and dividends as it is evident by the company’s cash stockpile that they can fund both new projects and shareholder initiatives alike.

Based on our analysis it is evident that addressing the company’s excess cash and capital structure will be a positive driver for ROE. Although the 80% plan will increase ROE the most of the available options, there are concerns with decreasing ROA, increasing interest expenses, and the likelihood for financial hardship charges in the future. Under the 80% plan BBBY will also have a Debt-to-Total Capital ratio that is significantly higher than the industry average. We see this as a negative, and foresee potential credit downgrades as a result. BBBY should select the 40% debt-to-total-capital plan. If BBBY uses 40% debt to total capital, it would be able to be recapitalized in the future. And the company has $28.009 million which can be repurchased. Second, Based on Exhibit 8, company will have $33.344 million tax saving. According to Exhibit 6, Target’s debt to total capital ratio is 50%, and the bond rating is A+. If BBBY can use 40% ratio, it will have a similar rating with Target. Base on Exhibit 7A, A’s total debt/ capital (%) is 42.6%.

Analysis of Bed, Bath and Beyond Business Success. (2016, Apr 10). Retrieved from https://studymoose.com/analysis-of-bed-bath-and-beyond-business-success-essay 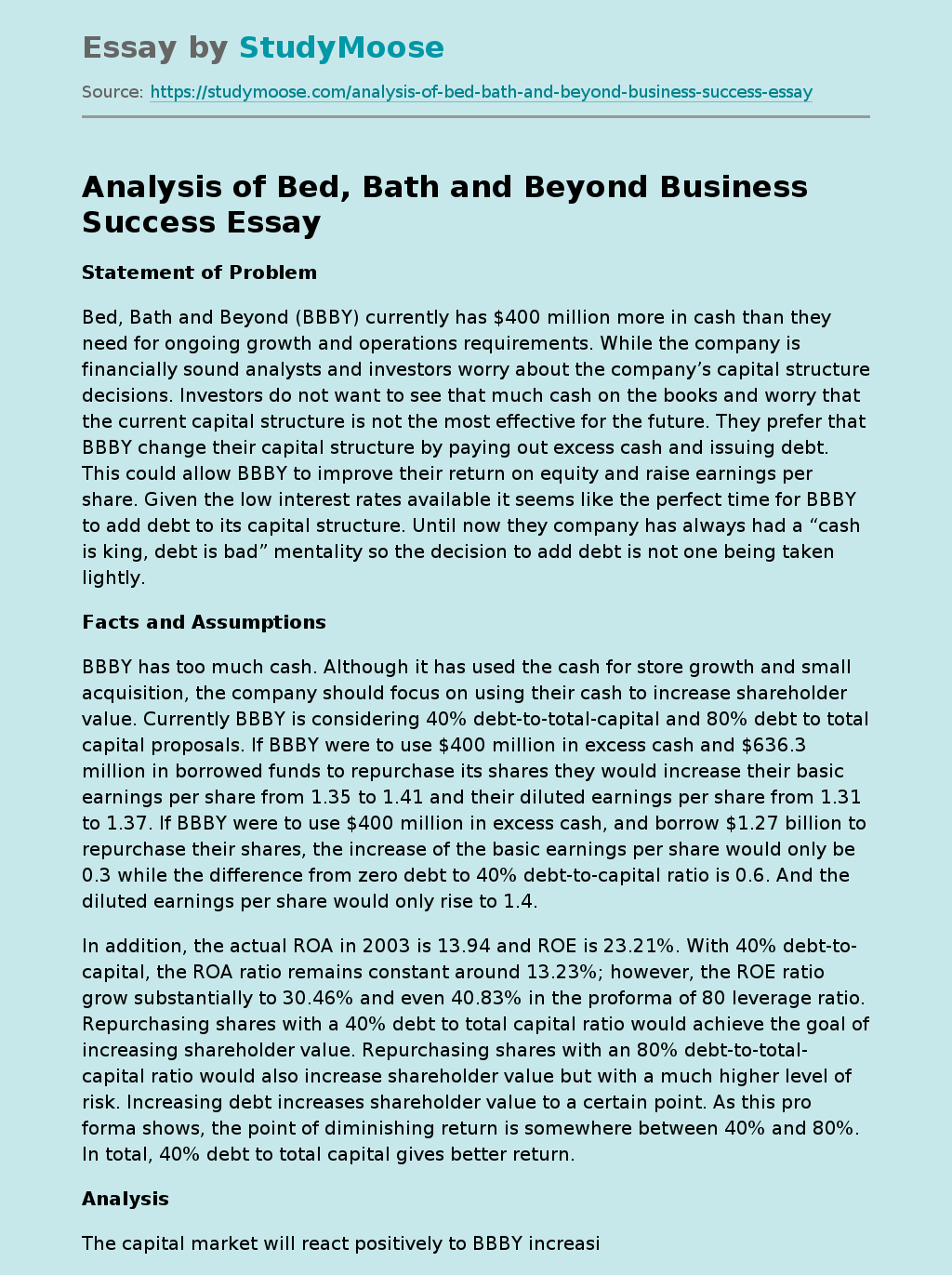