“The Veldt” by Ray Bradbury

After reading the story of “The Veldt” by Ray Bradbury, I felt shocked. The beginning was all innocent. I thought it would be about how their parents took care of babies in their own nurseries; but after a few paragraphs, I realized that this story was a tragedy. How could chldren even think of killing their own parents? After all, the fact that their parents gave birth to them is the whole reason that they are able to think, act, feel, and talk! When I first read about the lions and how they were feeding, I kind of thought that something really tragic was about to happen.

Turn in your highest-quality paper
Get a qualified writer to help you with
“ “The Veldt” by Ray Bradbury ”
Get high-quality paper
NEW! AI matching with writer

I had no clue, however, that it would include murdering, much less children killing their own parents! The parents have indeed been relying on the machines and technologies too much, and causing their own children to act so too. However, they did buy those machines in order to make sure that their children lived an easy going life, full of adventure.

On the other hand, the parents did indeed care for their children. It just seemed that the children did not realize that at all! The children had been spending too much time in that “nursery” causing them to have a twisted mind.

They had replaced the house and the nursery as their family. Even though I do see how the parents care for their children, I do agree that they had not cared for them enough. If the father and mother had cared enough, I do would’ve realized much earlier and found a way to prevent what would later happen to them.

Their parents had given them a life that no other children had. They had things that no others have. They should be thinking of how to pay back in the future, but not how to kill their parents for something as moving! I do understand that sometimes parents are unreasonable, always blaming children, yet don’t give chldren the chance to explain themselves. However, parents always think for their own children. Well, who doesn’t? At times, parents could be harsh, strict, and pushy, but one should also think of the times that their parents did everything for them. A mother or father would do anything for their child. 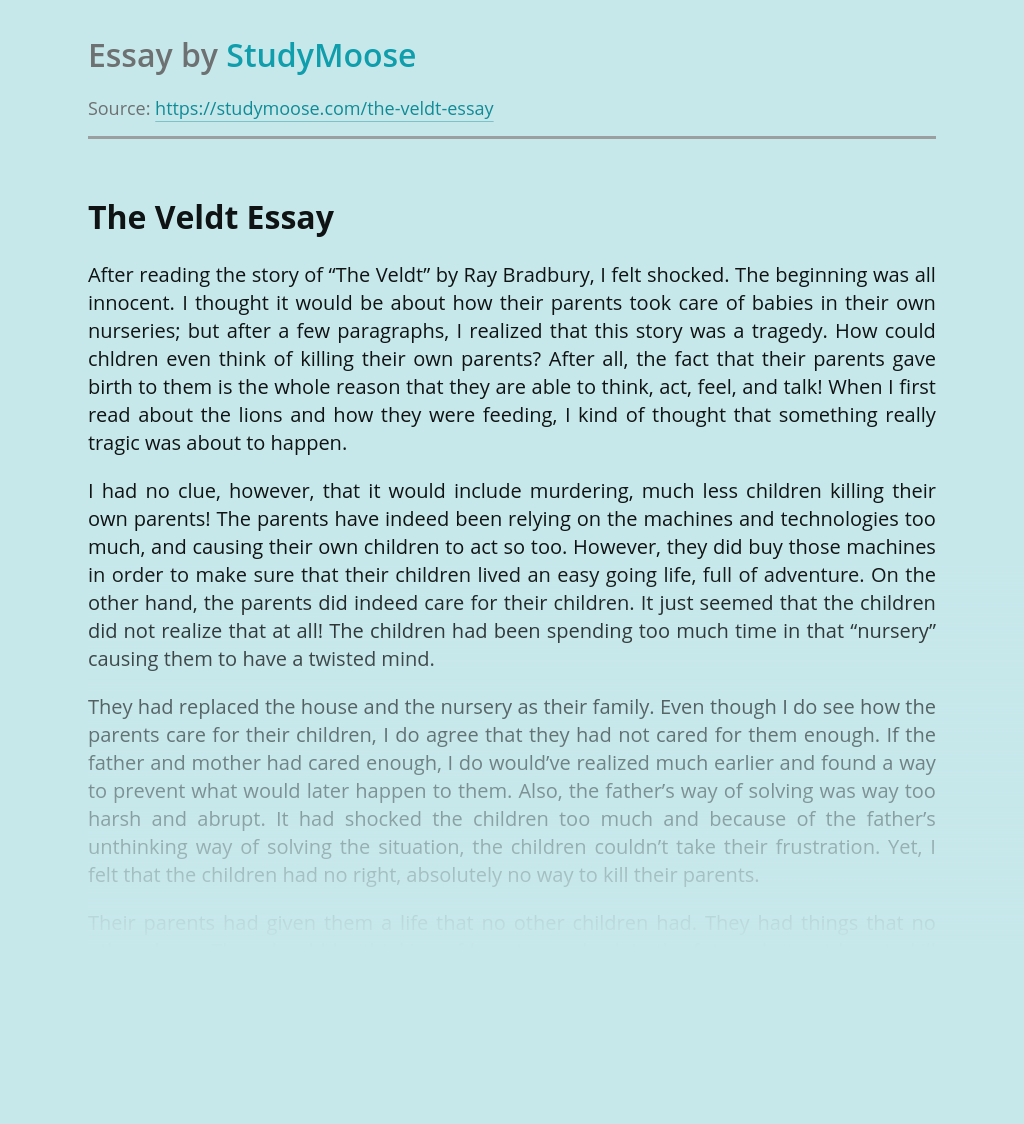 Turn in your highest-quality paper
Get a qualified writer to help you with
“ “The Veldt” by Ray Bradbury ”
Get high-quality paper
Helping students since 2015
Stay Safe, Stay Original