Belonging is a multi-faceted concept that involves intrinsic aspects of human nature that are reliant on the individual’s life-long bond with various social, political and interpersonal relationships. Belonging is also fundamental in shaping an individual’s core values and identity, thus it is central to the human condition. A sense of belonging is developed through strong relationships over time is explored in Steven Herrick’s novel ‘The Simple Gift’ and Armin Greder’s picture book ‘The Island’. In The Simple Gift we see how an individual’s interaction with others can lead to a sense of belonging.

Don't use plagiarized sources. Get your custom essay on
“ “The Simple Gift”by Steven Herrick ”
Get custom paper
NEW! smart matching with writer

Sharing common values and discontent with their family life enable the three protagonists to bond because of their shared experience of loss and deprivation. Billy Luckett, Catlin Holmes and Old Bill are all escaping the emotional and psychological pain associated with their respective families and as a result all three characters become alienated and is connected through this shared negative experiences.

In the poem Champagne, the use of criticism when referring to his father as ‘The old Bastard’ accentuates both Billy’s sense of alienation and sense of disconnectedness from both family and place.

The reason behind Billy’s alienation is not only because of the absence of any mother figure, but because of his dysfunctional relationship with his callous father, who has destroyed Billy’s sense of belonging or connectedness to the family. The nature of this relationship is conveyed when Billy’s father displays a violent episode in the poem ‘Spent’, where Herrick adopts flashback techniques: ‘he gave me a backhander when I was only ten’.

As ‘actions speak louder than words’, his father’s negative impact on Billy’s ability to belong is made apparent when Billy chooses to be become homeless rather than remain at home with his father.

The difficulty associated with not being able to develop a sense of belonging to other people, places or shared events, motivates characters such as Billy and Caitlin to reject their family’s values as superficial and look for emotional security and a new environment of shared values through their growing relationship and love each other. Caitlin’s own dispossession from her family is similar to that of Billy’s because she sees them as materialistic and superficial. Disunity amongst the family can be seen through Caitlin’s negative interaction with her parents.

The novels negative undertone is revealed through the reference to Caitlin‘s parents’ social economic status and a ‘dad who spoils and buys your unnecessary crap’ and after listing the objects in her bedroom, the her defiant tone in ‘I’m not a spoilt brat OK/ spoilt to boredom/ but I’m smart enough to know that none of this means anything…’. This repeated hyperbole highlight the superficial value of her parents and it also creates a barriers between them, as Caitlin is searching for something more spiritual and lasting, rather than simply adopting the middle class values and traditions of her parents’ generation.

The same lack of harmony within family becomes a catalyst that strengthens their bond because it is based on mutual understanding of each other’s circumstance. This emotional bond is metaphorically represented as Billy reflects on how he feels about Caitlin and the impact she has had on him. He likens their relationship to: ‘a circuit plans/ Caitlin at the centre/ and me spinning crazily in her orbit’, the bond is symbolised as gravity: a strong force which pulls two particles close to one another. Their intimacy is marked by the euphemism: ‘I know what would happen and I know what I would want to happen’. The repetition of ‘happen’ emphasises their emotion understanding of what love truly is and how it has developed; unconditional and selfless.

It is the caring nature of their relationship that nourishes their mutual love and respect for each other. This in turn, strengthens their ability to both individually transform their lives. Caitlin accepts Bill’s poverty and homelessness, regardless of her background or her parents’ middleclass values and traditions. This experience of mutual acceptance and understanding is emphasised in her declaration: ‘I love Billy. I’m sure of him and I want my parents to know.’

Furthermore, Billy’s transformation is marked by his new profound approach to life which is illustrated I his peaceful mood as he sits in the sun with Caitlin b the Bendarat river bank. The beauty and serenity of the scene conveys a new positive approach to life which is juxtaposed with the sense of alienation and hostility which was evident at the beginning of the verse novel. Therefore, a functional relationship, with Billy and Caitlin’s interaction with one another induces a sense of belonging.

In the poem Comfort Billy reflects on his previous isolation at Wentworthville High school and his inability to establish meaningful relationships with other students Billy had known for years: ‘I didn’t have any friends, I didn’t want any’, ‘I kept myself in my bedroom, reading and avoiding my father’. Herrick juxtaposes this feeling of isolation that Billy felt in his unhappy home setting with the happiness and comfort he experiences when reading his books at Westfield Creek. Billy’s attachment to this natural world is revealed through the repetition of, ‘I love this place,I love the flow of cold clear water over the rocks, and the wattles on the bank and the lizard’s sunbaking, heads up, listening’.

This evocative use of descriptive detail is used to personify Westfield Creek as Billy’s favourite classroom where he spends half of his school days reading the books he had stolen from the Megalong Bookshop. Later, when living in Benderat, when Billy gets his first pay from his job at the Golden Crest Cannery, he reflects: ‘I wanted to spend the money quickly, so I could go back to nothing, go back to being rich and penniless again.’

Billy realises that he wants to stay in the town and rather than stealing ‘the thick silver ring with the green emerald stone’ which reminded him of Caitlin’s eyes, he pays the jeweller $100 for the ring. This illustrates profound changes in Billy’s moral behaviour which has come about through a shared relationship with Caitlin. Their relationship is not based on materialistic values because the relationship has given him the inner confidence to overcome his socially deviant behaviour and gain a sense of connectedness to significant others to in his world.

Another central character who also suffers the negative isolation and feelings of alienation and disconnectedness from society is the fifty-year-old alcoholic, old Bill who billy first meets in an old train carriage, euphemistically referred to as the Bendarat Hilton. In The Hobo Hour Billy describes him in vivid details: ‘His grey beard was stained with smoke, his long hair swept back, his face lined’. Old Bill soon becomes Billy’s surrogate father and after a brief meeting Billy discovers it is his birthday and offers him the carton of cigarettes he stole from his father. As Old Bill gets up to go to bed ‘to sleep off his sorrows’ he spontaneously welcomes Billy: ‘Welcome to the Bendarat Hilton, I’ve been here since March 2nd, 1994, May your stay be as long as you wish it’. Billy’s ‘Simple Gift’ of kindness towards Old Bill, has a profound impact on their relationship and Old Bill’s Socially deviant behaviour.

It is through the mutual support and respect for one another that these two homeless characters begin to bond. In the poem Old Bill’s Fall, Old Bill Reveals the tragic details associated with the death of his ten-year-old daughter Jessie who ‘Fell out of a tree and landed bad in a coma’ and the impact this tragedy had on his life. The significance of the personal disclosure of these painful events is revealed through the repetition of first person narrative: ‘I sat beside her.

I held her hand, I talked to her and when she died, I went home and took to that tree with an axe’. In sharing the pain associated with Jessie’s death with Billy, Old Bill is able to achieve peace through the positive experience of closure and this begins to transform his life. This personal transformation of Old Bill is symbolised by the key that he gives to Billy and Caitlyn to his house in order to prevent the young couple being separated by the authorities, and Billy being sent back to his Longlands Road home. Old Bill is not just giving Billy the keys to his home, he is starting to let go of the past.

The short chapter titled Locks and Keys describes Old Bill giving Billy the Key to his family home. This is an emotional moment in the book as Old Bill is moving forward with his life. He will no longer remain stagnant and stay in his train carriage. Billy wants to share the moment with Caitlin, so he does not enter the house until she has finished school. Together they cross the threshold. ‘I insert the key, and turn it slowly and push the door. I reach behind for Billy’s hand and we walk inside.’ It s through Old Bill’s ‘Simple Gift’ that Caitlin and Billy are able to start their new journey together as the leave behind the isolation and alienation associated with their childhood.

In The Simple Gift, it can be seen that belonging and not belonging is represented through the various shared relationships that are transformed through the individual character’s connections to places and significant events. It is through the acceptance of shared experience and kindness that allow the central protagonists an opportunity to overcome the tragic events of their early life and establish a new positive beginning. Despite having to face homelessness, isolation and social deprivation, Billy and Old Bill both find independence and personal growth through their relationship in Bendarat. Billy also transforms his life by establishing a new home with Caitlin. It is through these shared relationships all f the central characters learn how to reconnect with society and establish a strong sense of belonging to the world around them. 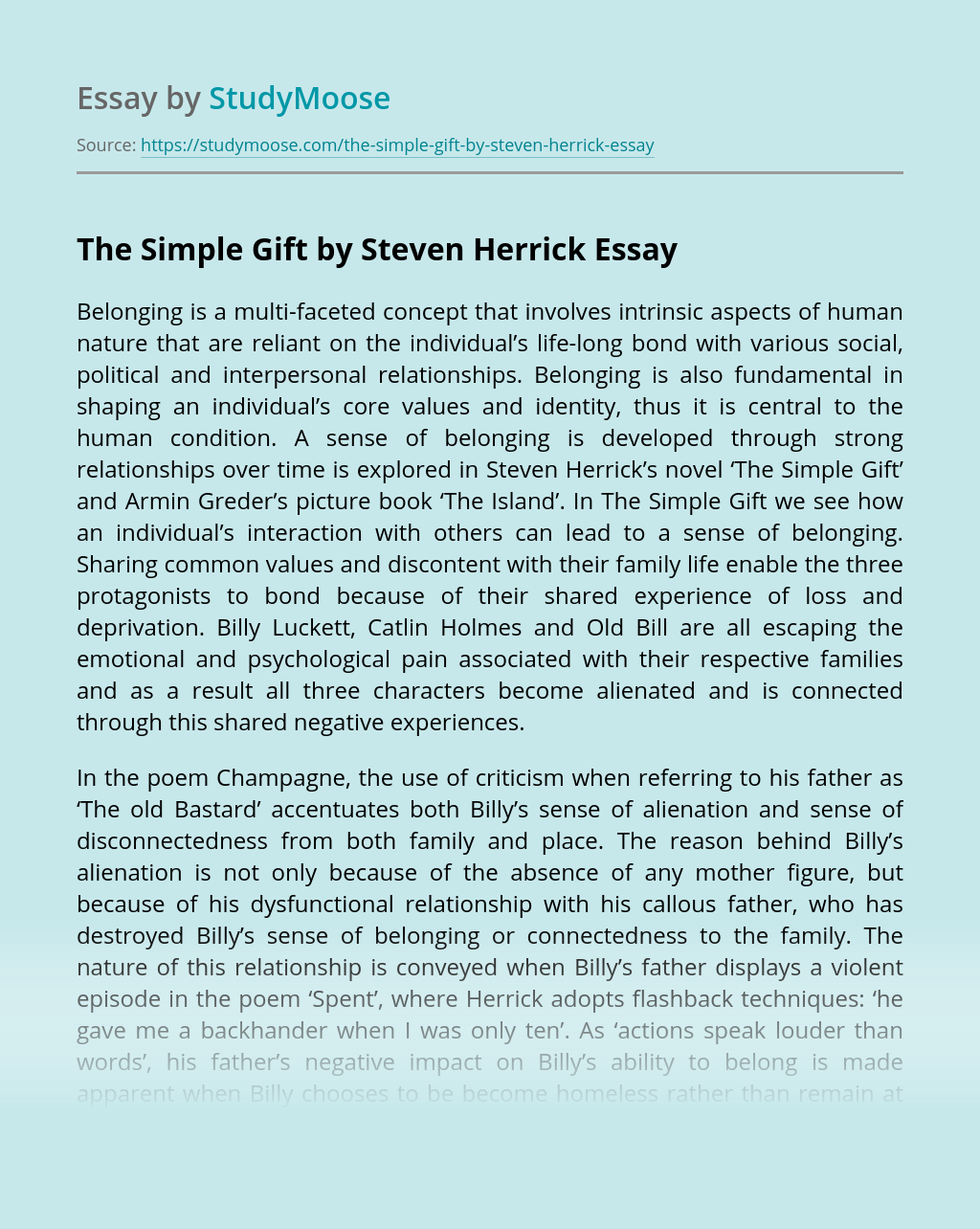