The poems by Steven Herrick ‘Caitlin and Mopping’ and ‘The Picnic’ written in 2000 and the novel by Amy Tan ‘The Joy Luck Club’ written in 1989. Through figurative language and poetic techniques the composers represent the sense and connection of belonging in narrative and poetic form. ‘Caitlin and mopping’ is a poem written by Steven Herrick in 2000. It is based on the compelling story of 16 year old boy named Billy, who trades the soulless tyranny of his father’s home and the tediousness of high school for a life of no fixed address.

Don't use plagiarized sources. Get your custom essay on
“ Belonging and Acceptance in Steven Herrick’s Poems ”
Get custom paper
NEW! smart matching with writer

The purpose of the poem is to tell the reader the first time Billy meets Caitlin who is an employee, mopping the floors. They have daily chats, become great friends, which eventually turns into a relationship. Billy and Caitlin have this amazing connection, even though they come from two different worlds. They become very faithful with each other. The persona chooses to tell his story through direct speech and structural techniques.

Steven Herrick uses poetic techniques, direct speech and relationships to help convey the understanding of integration in this poem.

To prove so, when Billy steals leftover food in McDonalds, he opens up the oppurtunity to belong to Caitlin. When Caitlin observes Billy ‘stealing scraps’ she is drawn to the way Billy looks ‘self contained’. His demeanour is what encourages her not to call the Manager. Instead Caitlin ‘smiled at him. I smiled at him and said, “I hate mopping. ”/ he sat in his chair/ and smiled back/ and i felt good/ that i hadn’t called the Manager.

’ Herrick uses the direct speech in this extract to demonstrate the potential for belonging etween Caitlin and Billy. She does the unexpected and puts him at ease and the motif of their smiles further emphasizes a connection between the two. This poem shows the significant moment of when Billy and Caitlin first met and the connection between the two will be stronger in time and shape our understanding of the two characters belonging to each other. ‘The picnic’ is a poem written by Steven Herrick in 2000. The poem is about Caitlin and Billy having a picnic together and showing their affection and devotion towards each other.

The purpose of this poem is to show the growing sense of union and connection that builds between the two characters through stages of events. Herrick uses poetic techniques and relationships between characters to help convey the understanding of acceptance between the two characters. To prove so, Caitlin and Billy have a picnic together by the Bendarat River. The rhythm and pace of ‘The picnic’ is slow and calm. Herrick uses repitition – ‘We ate everything/ We took our time… / It was warm,/ it was delicious… – and a steady beat throughout this verse to illustrate that the way in which Caitlin and Billy come to feel a sense of belonging to each other is unhurried and easy. The use of personification ‘and the beer worked its magic’ attributes the human characteristics to inanimate the object, which in this case helped convey that the significant moment was working through ‘magic’. The enjambment in the final part of the verse – ‘and we slept together/ only/ we really did just/ sleep together/ content/ to waste the hours/ close. – also places emphasis on the feelings of comfort and closeness that each provides for the other. This poem relates to ‘Caitlin and mopping’ with similar uses of techniques such as poetic techniques. This poem links to the significance of moments because this it is in actual fact about a significant moment where the two characters have a moment together which help shape their sense of belonging together through time. Both poems use the technique language modes. Herrick combines the modes of narrative and poetry to represent the concept of belonging.

By combining these two modes of representation, Herrick is able to explore the many dimensions of belonging. The narrative mode helps him represent the process or stages of belonging quite clearly as his verse novel follows the conventions of plot. Each chapter moves the events of the story as a whole forward and we are able to see the ways in which his key characters begin to feel they belong together By using the mode of poetry as well in his text, Herrick is able to represent the emotions of his characters very economically and powerfully. This The novel ‘The joy luck club’ by Amy Tan is written in 1989.

The story is about death of Suyuan Woo, an elderly Chinese woman and the founding member of the Joy Luck Club. Suyuan has died without fulfilling her “long-cherished wish”: to be reunited with her twin daughters who were lost in China. Suyuan’s American-born daughter, Jing-mei (June) Woo, is asked to replace her mother at the Joy Luck Club’s meetings. She soon realises the distance between herself and her daughters and makes an effort to get closer and create an affiliation bond. Amy Tan uses many techniques such as figurative language and flash backs to help convey the idea of belonging.

Shown through each chapter, concepts of belonging are shown within events. In the chapter ‘Feathers from a Thousand Li Away’ In ‘scar’, An-mei’s mother ‘cut a piece of meat from her arm’ showing the daughter’s devotion to her mother, and sense of belonging to her. ‘This is how a daughter honors her mother’, comments An-mei. In ‘The Red Candle’ Lindo’s moving to her future mother-in-law’s house ends her sense of real belonging with her own family. ‘I missed my family and my stomach felt bad, knowing i had finally arrived where my life said i belonged’.

This use of ‘belonged’ is ironic, however, since it is Chinese tradition which says Lindo belonged there, not her own feelings. Figures of speech such as similies and metaphors are used throughout to enrich the imagery of belonging. Similes are frequently used: ‘my mother loved to show me off, like one of my many trophies she polished’. The simile shows that Waverly felt her mother had made her into an object from which to gain status, a perception which impaired for many years her sense of belonging with her mother.

Metaphors often help enhance a character’s erception about belonging, as Waverly’s later epiphany about her mother: ‘I could finally see… an old woman, a wok for her armor, a knitting needle for her sword’. The metaphors of the wok and the knitting needle show Waverly’s realisation that Lindo is not threatning, and help her to regain a sense of belonging with her mother. Flashback is used in every story and helps the reader to understand the sense of belonging or not belonging of the characters. The flash backs help us understand the characters by revealing aspects of their past. The Joy Luck Club’ relates to the two poems from ‘The Simple Gift’ because they are all similar with techniques (such as figurative language) and understanding of belonging and acceptance within the texts. The quotes, techniques and examples above emphasize that siginificant moments in life shape our identity and individuality of integration in time. It has been proven that the poet and author of the two texts have used developed structures, poetic techniques and structural techniques. The examples have proven that both, novels and poems, use significant moments in time to shape our understanding of belonging. 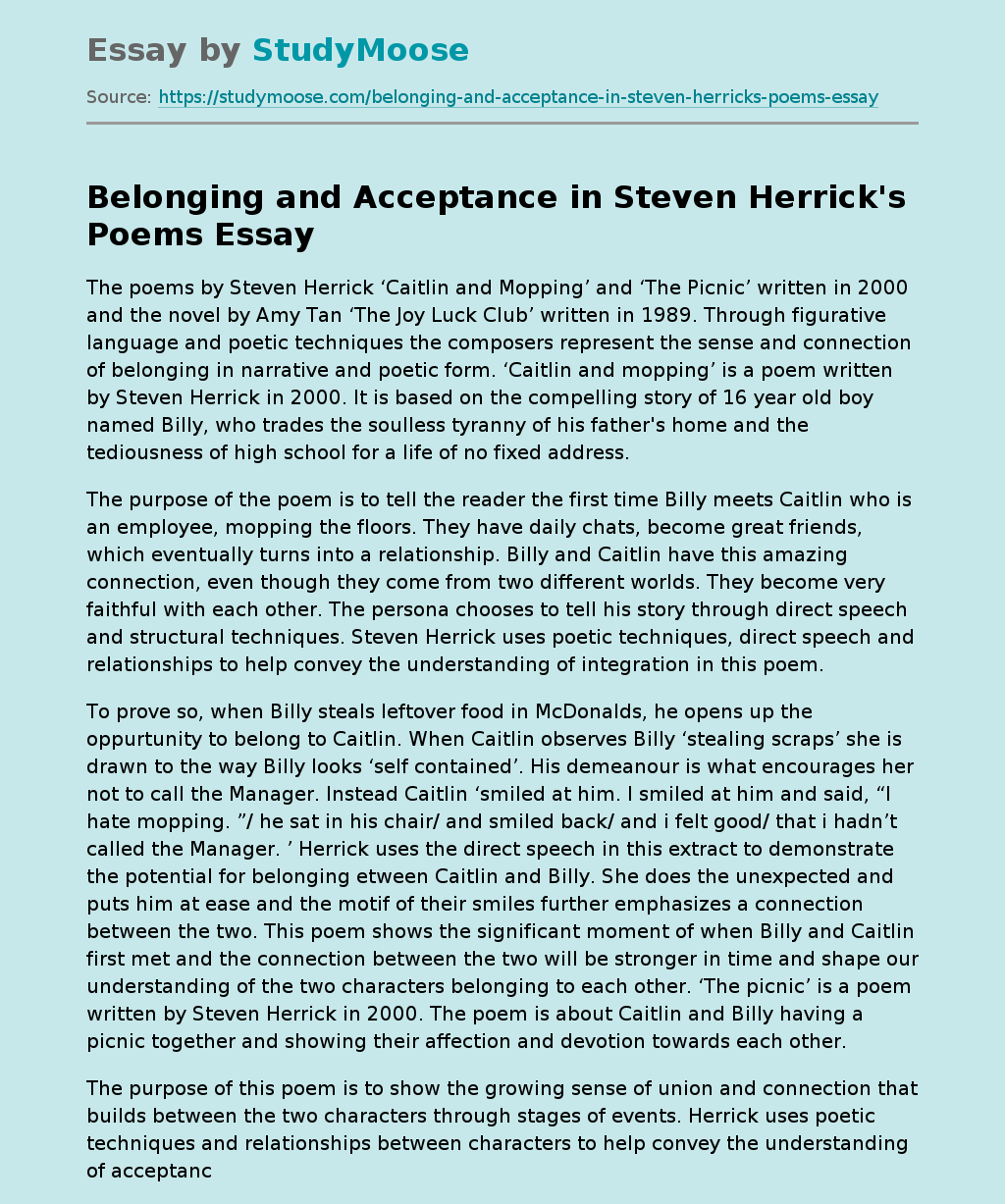