The right to Die

In the article “The Right to Die”, Patrick Nowell-Smith addresses the moral issue of euthanasia.

He discusses the idea of its legalization in order to give people the right to choose if, how and when they want to die, in the same manner that they have the right to live. The general purpose of this article is to advance and promote the grounds for legalizing euthanasia within the Canadian realm. Nowell-Smith introduces the argument by dividing it into two reoccurring subjects, “active” and “passive” euthanasia, he also takes this concept further with the distinction between “voluntary” and “involuntary” euthanasia.

It is appropriate to begin this summary with a brief understanding of these definitions. First, the practical moral issue surrounding euthanasia, is concerned with whether it is morally permissible for a person to end the life of another person who chooses to die. Active euthanasia is deemed the ‘killing’ of a person, however, if you let them die, it is referred to as passive euthanasia.

Voluntary euthanasia is “at the request or consent of the person(Nowell-Smith,p32)” and involuntary, then refers to the loss or lack of consent.

Nowell-Smith puts forward the issue of whether or not a person holds the right to die when he or she want and how he or she want to, especially when suffering from a disease and being kept alive by the ‘inhumane’ processes of modern medicine. He also indicates that the most unproblematic and painless ways of dying would require assistance, and in that, persons who are ill may be restricted in making the choice of whether or not to live, with no help from others.

Having said this, Nowell-Smith thinks that is people require assistance in committing suicide than the person giving the help should not be morally wrong and therefore should not be held legally accountable. Nowell-Smith seems to take this position on his evident dedication to individual rights. His thoughts and opinions follow behind the mentality that if we are given the right to choose life, should we not then be given the right to choose death?

I believe Nowell-Smith wrote this article to act as an instrument in order to illustrate his idea of the lack of moral comprehension surrounding euthanasia and also to stress the need for change in Canadian law to reinforce this understanding. As Nowell-Smith simply states it “death has replaced sex as the unmentionable topic. ” He recaps the idea of death being a societal taboo by emphasizing the importance of accepting death as a “natural end to earthly enjoyment (Nowell-Smith,p33)” instead of seeing it as the inevitable.

In the article, “The Right to Die”, Patrick Nowell-Smith presents his theories on the subject of euthanasia, that I consider to be justified and completely legitimate arguments. His perception that a person who is terminally ill and is suffering should have the right to choose to die is understandable and competently expressed.

The reoccurring theme in the article would, generally, be the legalization of euthanasia but on an individual level, it is that we “have the right to do anything we like providing that there are no good reasons for prohibiting what we do. (Nowell-Smith,p32)” To reinforce this assertion that basically what is ‘ethically correct’ is usually legally wrong, he presents the case of Mrs. Hough, who assisted her friend in suicide by placing a bag over her head subsequent to her unconsciousness due to a deliberate overdose of medication.

Consequently, Mrs. Hough was charged with second-degree murder and sentenced to nine months in prison. The judge in her trial was sensitive to the situation but maintained that it was her duty to sustain the law and therefore punishment was necessary. Throughout this article, Nowell-Smith proves that he does not hold the same values as the judge, in that although sympathetic, she chose to abide by the law. Outlined in the text are the views of Judge Sopinka, regarding the Rodriguez vs.

British Columbia case of 1993, who makes his position on euthanasia evident in the statement, “as members of a society based upon respect for the intrinsic value of human life and on the inherent dignity of every human being, can we incorporate within the Constitution which embodies our most fundamental values a right to terminate one’s own life in any circumstances? (Sopinka,p10)” Based on such statements, it is unmistakable to say that he is in agreement with the judge in the Hough’s case, in that the protection of life should be a commonly held value.

Simply, they both seem to be dependent on the laws of euthanasia to determine what is right and what is wrong and therefore follow them in their court rulings. Nowell-Smith opposes this dependency, based on the importance of the prevention of pain and individual rights. The basis of the argument given by Sopinka is a reflection of the “slippery slope” concept, which is the “fear that decriminalization of assisted suicide will increase the risk of persons with physical disabilities being manipulated by others.(Lamer,p6)”

Justice Lamer, is in opposition to Sopinka and in accordance with Nowell-Smith regarding the “slippery slope” concept by stating that “I (Justice Lamer) do not think legislation that deprives a disadvantaged group of the right to equality can be justified solely on such speculative grounds, no matter how well intentioned. (Lamer,p6)” It is in this regard, that Nowell-Smith’s argument strengthens, as he directly confronts all the issues behind the “slippery slope” concept as set forth by the Canadian Law Reform Commission.

Their first objection was based on the decisions to prosecute could be open to the suspicion, Nowell-Smith disputes this stating that their exists a fear in physicians due to “possible prosecution… if they do not pull out all the stops to keep a patient alive(Nowell-Smith,p35)” and although they would like to end a patient’s suffering they are unsure of how the Commission would react. However, arguably, Hippocrates, an Ancient Greek physician, says in a famous oath, “I will not prescribe a deadly drug to please someone, nor give advice that may cause his death.”

The second doubt was based on the notion that any provision may lead to differences in law enforcement, perhaps creating the idea that life is not equally valued everywhere in Canada. Nowell-Smith rebuts this by pointing out that in light of these expected discrepancies, the Commission should have found a way to implement precautionary and preventative methods.

And the third argument is that a provision to the law may be undesirable to the majority of Canadians, Nowell-Smith once again challenges this objection by asking where the evidence is to back up such a statement. Although, Nowell-Smith provides an impressive rebuttal to the Commission, his argument begins to weaken in comparison to the statements of Judge Sopinka, when he claims that a person’s right to life requires no responsibility to keep a person alive, but does create a duty to not keep a person alive without their permission.

Sopinka makes a stronger argument in her assertion that the “security of a person, by nature, cannot encompass a right to take action that will end one’s life as security of the person is intrinsically concerned with the well-being of the living person… This argument focuses on the generally held and deeply rooted belief in our society that human life is sacred. ” 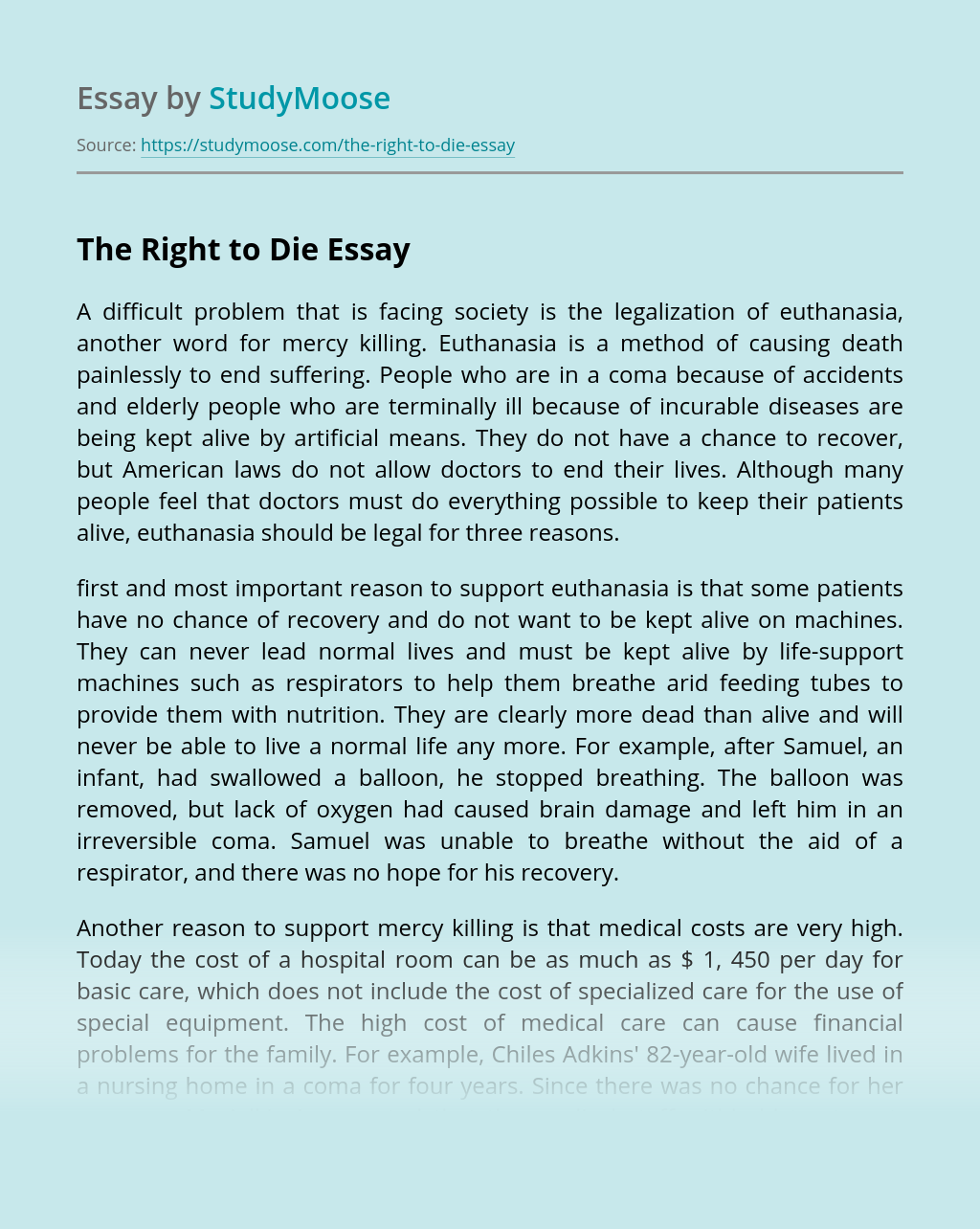