Good stories oftentimes have well-written heroic characters. That is because the hero functions as the character with whom the readers relate to. The significant role of the hero is that he is the one who communicates the experience within the narrative. But what if the central characters of a good story are lacking essential heroic traits? Instead the central characters exemplify unheroic attributes such as cowardice. It would be understandable if the readers would scour the pages of a good story for characters to look up to.

Don't use plagiarized sources. Get your custom essay on
“ Male Characters as Less Heroic than the Female Characters of “Generals Die in Bed” ”
Get custom paper
NEW! smart matching with writer

This is the subtle effect in Charles Yale Harrison’s “Generals Die in Bed.

” Arguably, the women characters in the novel had acted more heroic than the male characters. But before we traverse further in this discussion, it would be essential to first have a definition of the word “heroism. ” The word carries along a mythological connotation. The first ideas would be of brave men overcoming great obstacles and challenges. The word is often attributed to soldiers, knights, kings, etc.

But if treated with a contemporary approach, the word pertains to acts of selflessness geared towards others. In today’s world, we do not have to slay a dragon to be heroes, we just have to be of any help to the people around us.

What had lead to the argument that the women were more heroic was the cowardice of the men. The juxtaposition of the level of heroism of men and women had set latter as the more admirable and the former as cowards.

If the tone and language of the male characters would be reviewed, especially the narrator’s, it is evident that their mindset are comprised of a mixture of fear and naiveness. The narrator is seemingly a little enthusiastic about going to war. Of course he was afraid, but the fear they experienced in the trenches would be amplified exponentially.

The narrator describes what they experienced as hypnotic terror (Harrison 163). The characters of the novel had entered the war as civilians who held up to morals and values. But as they were becoming accustomed to the life at the trenches, they had developed cowardliness. There was even an account wherein they had become afraid to light the candles because they might be spotted by snipers (69). The characters appeared to be less heroic as the war progressed. The narrator even seemed to be relieved when he delivered the last line of the novel “I am carried up the gangplank. ” (170)

War songs are usually cheery to raise the morale of soldiers and alleviate “shell shock. ” But in the novel, the songs that the soldier sung expresses fear of what the war has to offer “I’m too young to die, I want to go home” (15). In addition, most of the soldiers would go to battle in a drunken state. Perhaps it is to some kind of coping mechanism for the stress and distress due to the war. Should we ever consider bloodlust as a heroic trait? There are many recounts of killings interspersed all over the novel. There was an instance wherein the narrator was telling Gladys in a lively fashion that he had committed murder (95).

Then when he observed that Gladys was becoming offended and afraid of his story, he laughed and said that the killing took place in the trench. In the narrator’s standpoint, it was as if the murder that he had committed was something easily acceptable and forgivable. It was as if an enemy’s life does not count as life of another human being, but a life of some animal whose destiny is to be brutally slaughtered. The narrator described how he and his comrades had become “snarling, savage beast” during their brutal encounter with the enemy troop.

The male characters in the novel had shown degrading kindness towards humanity. Since it was the males that were sent in the battlefield and develop this dehumanizing kind of mindset, it is the females who are left at home devoid of these ill thoughts. In the light of the novel’s context, a shining example of heroism by the females would be of the nurses. The nurses during times of war had shown outstanding bravery that could be compared to the bravery of men in the frontline. They are the ones who risk their lives in war stricken areas, but instead of killing people, they risk their lives saving the injured.

The novel had painted a vivid picture of war with horrific realism, “severely injured, one of Broadbent’s legs is hanging by one strand of flesh” (147). These are the horrors that the nurses had to battle during the times of war. Furthermore, setting aside the risk of being hit by a stray bullet or being bombarded, the nurses faces the risk of infection and catching deadly diseases. This is an excellent example of heroism because of the risks involve and the nurses motivation of helping those who are in need. An injured soldiers who were healed and taken cared off by nurses should consider the nurses as their heroes.

As opposed to the seemingly passive character of the protagonist, one of the most colorful of all the characters is Gladys. For those who had the chance to read the novel, she is easily remembered as to one of the few women who have a proper name in the ensemble of characters. Moreover, she was a “courtesan” or a prostitute with whom the protagonist had spent a great deal of his time. In effect, Gladys had a significant effect on the protagonist’s worldview. It should be pointed out that being a “courtesan” or a prostitute is one of the world’s oldest known profession.

It would be troublesome to argue that being a prostitute is heroic. However, if we were to discuss selfless acts, nothing could be selfless than selling oneself to provide for one’s family. Just like other companions of soldiers, be them wives, girlfriends, mothers, etc. , they all serve as inspiration for the soldier. It is no secret that women have an inexplicable capability of raising the morale of soldiers. And of course, of all the women exemplifying admirable heroism during the war, it would be the mothers on top of the list.

Mothers are directly affected of the war because everyday they battle horrific thoughts of their husbands and sons getting killed in the battlefield, of never seeing them alive ever again. If we would be talking about obstacles and challenges, those thoughts could be hardest ordeals one has to face. Admirably, mothers of war participants overcome those thoughts and still be able to tend to the needs of their children. There is an instance in the novel wherein the narrator and his comrades were wounded and in need of a place to stay. They managed to find a war-torn village where an old woman, a mother, was residing.

The hospitable old women provided them with food and a place to stay. She even treated the wounds of the soldiers. The nurturing that only mothers are capable is undeniably heroic. Conclusion The author has described the horrifying experience in the trenches, thanks to his first hand experience of the war. Fear is very evident in the male characters and that fear is communicated to the reader. The absence of characters with whom the reader could view as heroic lead to the conclusion that women were more heroic. Women in the novel were generally described as agreeable. The most negative of all could just be Gladys’ job as a prostitute.

Other than that, women were the ones whom the soldiers run to when they need help. The women were willing to help the soldiers even though they are not required to do so. Soldiers will always be of course the heroes in the eyes of the public, of the spectators of the war. But for those who truly take part in the war, not the generals who die in their beds, the heroic acts of women during the war are indispensable. Soldiers are not out there in battlefield to save lives, their duty is to kill the opposition. Fortunately, humans are blessed to be categorized under two very different yet complementing sex, man and woman.

The former being able to destroy and the latter endowed with the gift to nurture. Women should be commended in performing their different roles in the war. Arguably, they are more admirable in this context because they fight the war without having to carry the instruments of war like guns, etc. The real heroes of war should not just be judged by the number of people they kill, it should also be by the number of the lives they save. In this novel, we see that many acts of heroism are overlooked. Work Cited Harrison, Charles Yale. Generals Die in Bed. Ontario: Firefly Books Ltd, 2007 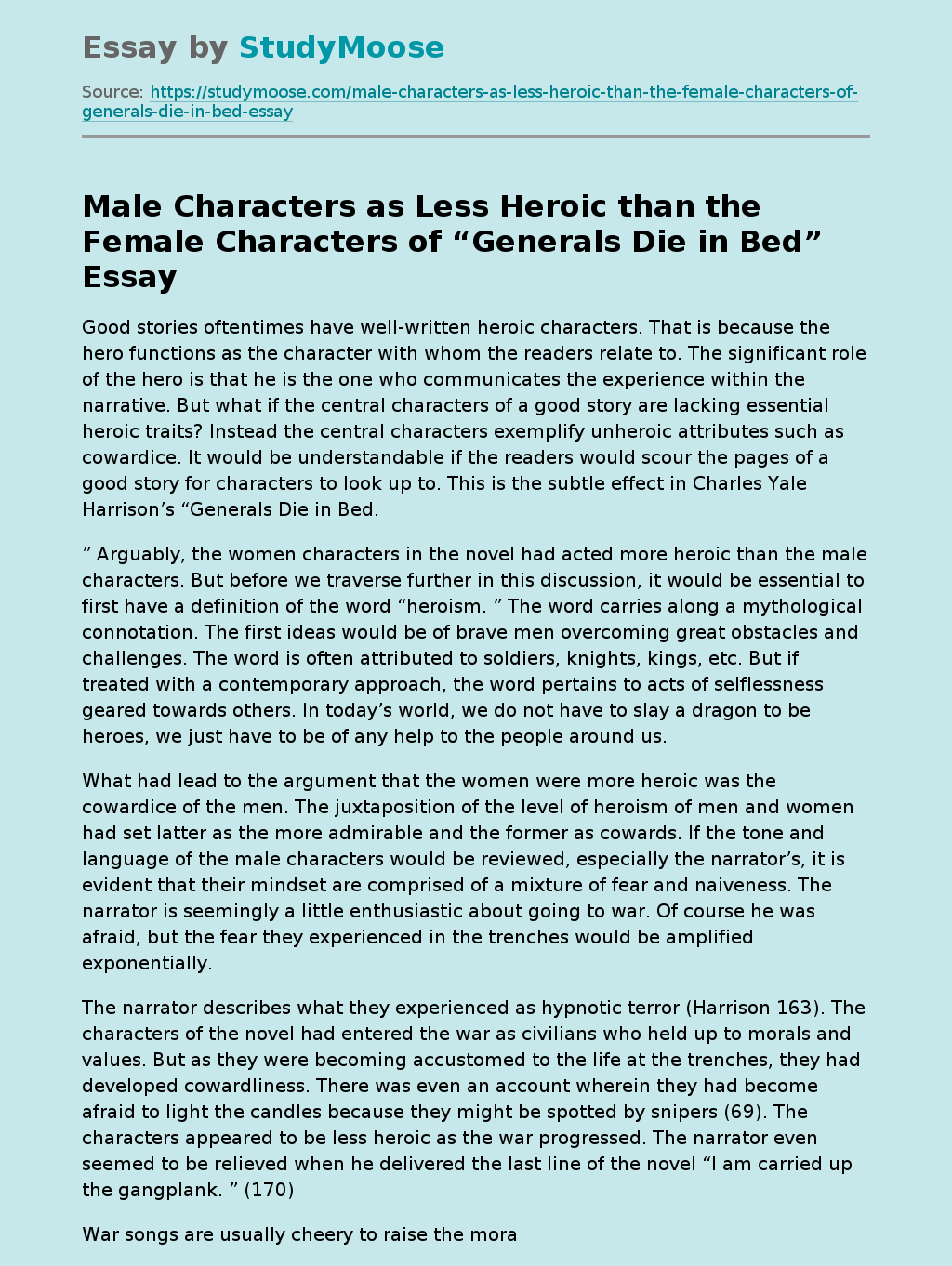