The novel Wide Sargasso Sea is basically a contrast as well as shows similarities between main male and female characters of the novel.

The Male of England vs. the Female of Caribbean is the focus of this essay. Both the characters play an important role in enhancing the themes, symbols and metaphors of the novel. No doubt, the writer of the novel Rhys has done a great job in explaining different psychological states of both the characters while putting them in different social situations.

Don't use plagiarized sources. Get your custom essay on
“ Binary oppositions of Male/Female in Wide Sargasso Sea ”
Get custom paper
NEW! smart matching with writer

The first similarity between them is the search for security.

In their entire lives they keep on searching for physical and mental securities. Antoinette wants it in the form of a man who can support him in many different ways and Rochester wants security in terms of finance and of the fulfillment of his lust. With security, they are in search of happiness also but the operational definition of happiness to both of them is completely different and which is the main crises of the novel. According to Rochester, happiness is in physical love and wealth while to Antoinette happiness is in being a protected woman.

The main desire of Antoinette in the novel is being loved and respected but unfortunately her man is unable to satisfy her in that manner. He never tries to understand his wife and always wants her to follow what he says, regardless of the fact that she is a human being and trusts him to extent. Rochester is in a superiority complex because of his complexion and is under the impression that he’s superior to others because he belongs to England.

Not only he himself is in superior complex, he wants to have an upper hand on Antoinette and associates her with inferiority because of her dirty childhood.

This is a human nature that everyone likes his/her mother land and so in the case of the novel. The guy of England doesn’t like to live in Caribbean and the girl of Caribbean can’t adopt the culture of England. They not only love their places but also hate to live at each other’s… Rochester feels insecure with the people of Caribbean and not feels comfortable living there. He is the man who has spent his early years in a developed country and can’t adjust to a landscape now.

On the other side, Antoinette is under the impression that her man’s dry behavior is due to the fact that he has to live in a totally different environment and she is, to some extent, true as well. One of the very important similarities between both the characters is dependence. She is dependent on him for social and financial management. Being a lady, she has to have a man to secure her in every possible way while he’s dependent on her for sexually satisfying himself. He’s dependent in the context of wealth as well.

Antoinette wants to dominant her fear (of childhood) through getting a life partner where Rochester wants a companion to satisfy his sexual desires. She goes through a miserable childhood and this is the cause of her psychological state that comes in the later part of the novel. In the novel, both of the main characters go through some type of mental disorder. Antoinette, being insecure to an extent that locks her in the room while Rochester experiences paranoia and thinks that his lady will leave him in that fearful and insecure place.

The novel is tragic, not because it has a sad ending but because both of the characters are unsuccessful in achieving their targets. Not only they lead their lives miserably but they meet an unhappy and tragic end as well. Instead of becoming a lady of her man’s heart, she is supposed to become a slave and on the other hand Rochester is under the impression that his lady doesn’t love him at all and has no interest in living with him. Throughout the novel, both of them keep on expecting from each other but running after their own happiness and desires of lives.

We see that they want to lead their lives according to their wishes. She doesn’t want to live in England while he hates Caribbean. We hardly see any element of compromise between them. They are less human in the sense that they give importance to their desires over people. But we have sympathy to both the characters also because this behavior of being selfish is due to the society. Her nature of being loved is due to her dark and unloved childhood while his obsession of money has excuses too. In a sense, both of them want happiness throughout the novel but meet a woeful end! Work Cited Rhys, Jean. , Wide Sargasso Sea 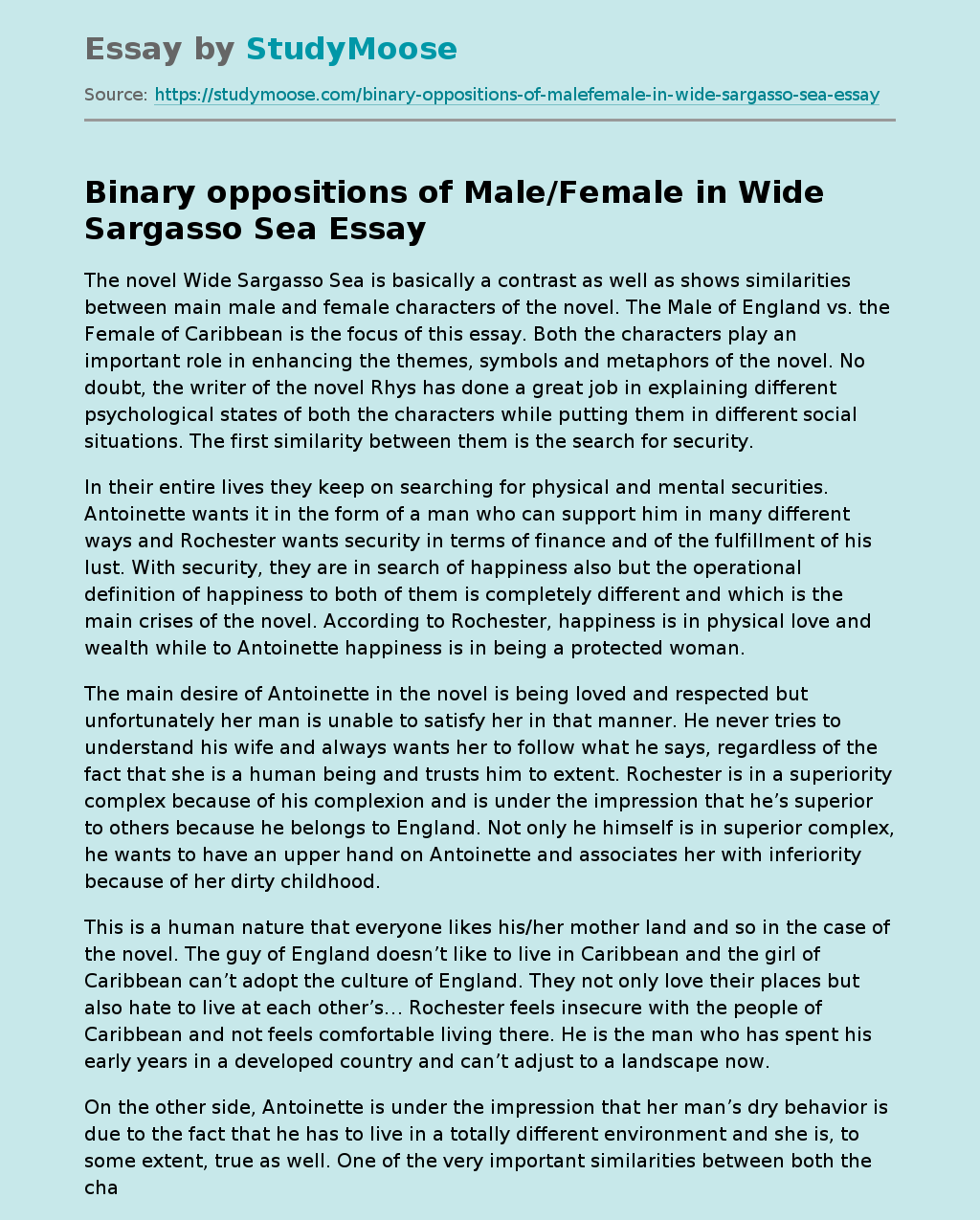