Throughout the course of literature, writers have used many different methods of expressing the internal emotions of their characters that made them either easier to sympathize with or relatable to the mundane life. Some wrote with stream of consciousness while other authors integrated the external world with the internal dialogue of their characters, thus creating a new perspective for the audience in the process. The setting is extremely important as it paints a backdrop of the environment and establishes the mood for the story.

Don't use plagiarized sources. Get your custom essay on
“ Internal Emotions in Jane Eyre and Wide Sargasso Sea ”
Get custom paper
NEW! smart matching with writer

In the novels, Jane Eyre by Charlotte Bronte and Wide Sargasso Sea by Jean Rhys, both authors portray the character’s emotional state through the utilization of pathetic fallacy and imagery in the setting.

Bronte and Rhys use imagery in the description of each character’s location to reveal their internal conflicts. In Jane Eyre, Jane’s childhood was filled with neglect and abuse from her own family members. She was particularly traumatized with the red room describing “…the wardrobe, the toilet table, the chairs were of darkly polished old mahogany” (Bronte 13).

In contrast to the red was the “scarcely less prominent… ample, cushioned easy-chair near the head of the bed, also white, with a footstool before it; and looking, as [Jane] thought, like a pale throne” (Bronte 13). The color contrast of the red and white emphasizes the “pale throne” which parallels the cold tyranny in Jane’s life in which her Aunt Reed controls. While she’s in the room, Jane also characterizes her reflection in the looking glass as a “…strange little figure…like one of the tiny phantoms’ half fairy, half imp…” (Bronte 13).

The fact that Jane does not see herself in the mirror indicates her confusion with her identity. This portrayal of her appearance implies that Jane feels isolated, especially in the Reed household, and disconnected as an outsider. She goes through a moment of mental confusion in the sense that she doubts her role in her family and the reason she is mistreated. Similar to Jane’s sense of identity, Antoinette loses herself while living in England. When being locked in the attic by Rochester, Antoinette becomes mentally unstable and describes England as being “…made of cardboard…where everything is coloured brown or dark red or yellow that has no light in it” (Rhys 162).

This dull description of England is a significant difference from her portrayal of the colorful islands in Jamaica. Antoinette’s vibrant and vivid illustration of the islands reflects her identity as belonging to the island communities which are characterized by their beliefs in obeah. However, as she is brought to England, the landscape and colors looses their value and ends up destroying her individuality in the process. The imagery in both novels plays a vital role in the character’s sense of identity and reflecting their mental state.

In comparison to the use of imagery, pathetic fallacy is demonstrated in the weather of both novels in which it mirrors the character’s personality development. In Jane’s case the audience is able to see her maturity throughout her life, starting from her chaotic childhood where the weather was “…a pale blank of mist and clouds; near a scene of wet lard and storm-beat shrub, with ceaseless rain sweeping away wildly before a long and lamentable blast” (Bronte 7). The weather is described as stormy and dark, comparable with young Jane’s emotions as a neglected child. The readers are also able to feel her loneliness and distress within the personification of the weather. Nevertheless, in the springtime at Lowood Institution, Jane’s maturity is recognized by her pleasant description of the spring weather where “…[the] bright May [sun] shone unclouded over the bold hills and beautiful woodland out of doors” (Bronte 78).

Her character is much more composed and seems to hold a level of self-control. The shift from the stormy weather to a refreshing spring parallels Jane’s character growth from a troubled child to a matured woman. In relation to the character development of Jane Eyre, the personification of the natural world mirrors Rochester’s corrupted personality. Throughout his time in the islands Rochester has always characterized his surrounding as being hostile and mysterious. When he is preparing to leave for England he notes the way “the bamboos take an easier way, they bend to the earth and lie there, creaking, groaning, crying for mercy. The contemptuous wind passes, not caring for these abject things. (Let them live.)

Howling, shrieking, laughing the wind passes” (Rhys 149). The way he observes the bamboos’ weakness and the wind’s “howling” creates a malicious aura around his character. In a sense the wind is quite similar to Rochester as they both dominate those that are weaker, such as the bamboos and Antoinette. He goes from being hostile to the island’s nature to being completely cynical in his way of thinking. Rochester even points out the cloudy day and the lack of sunshine suggesting the hatred and darkness he bores for Antoinette within his heart. Overall, pathetic fallacy of the weather mirrors Jane and Rochester’s state of mind at critical points of their life.

Nevertheless, Charlotte Bronte and Jean Rhys implement pathetic fallacy and imagery of the landscape to expose the character’s emotional state. In both novels, imagery of the location is essential to the understanding of Jane and Antoinette’s mental conflict with their sense of identity. Through the description of Jane’s reflection in the red room and Antoinette’s perspective of England the audience is able to conclude their loss of individuality. Furthermore, the personification of the weather parallels the character development of Jane and Rochester in the sense that the weather changes depending on their internal dialogue. In a way, the landscape is another character that the author creates to depict the character’s mental process. 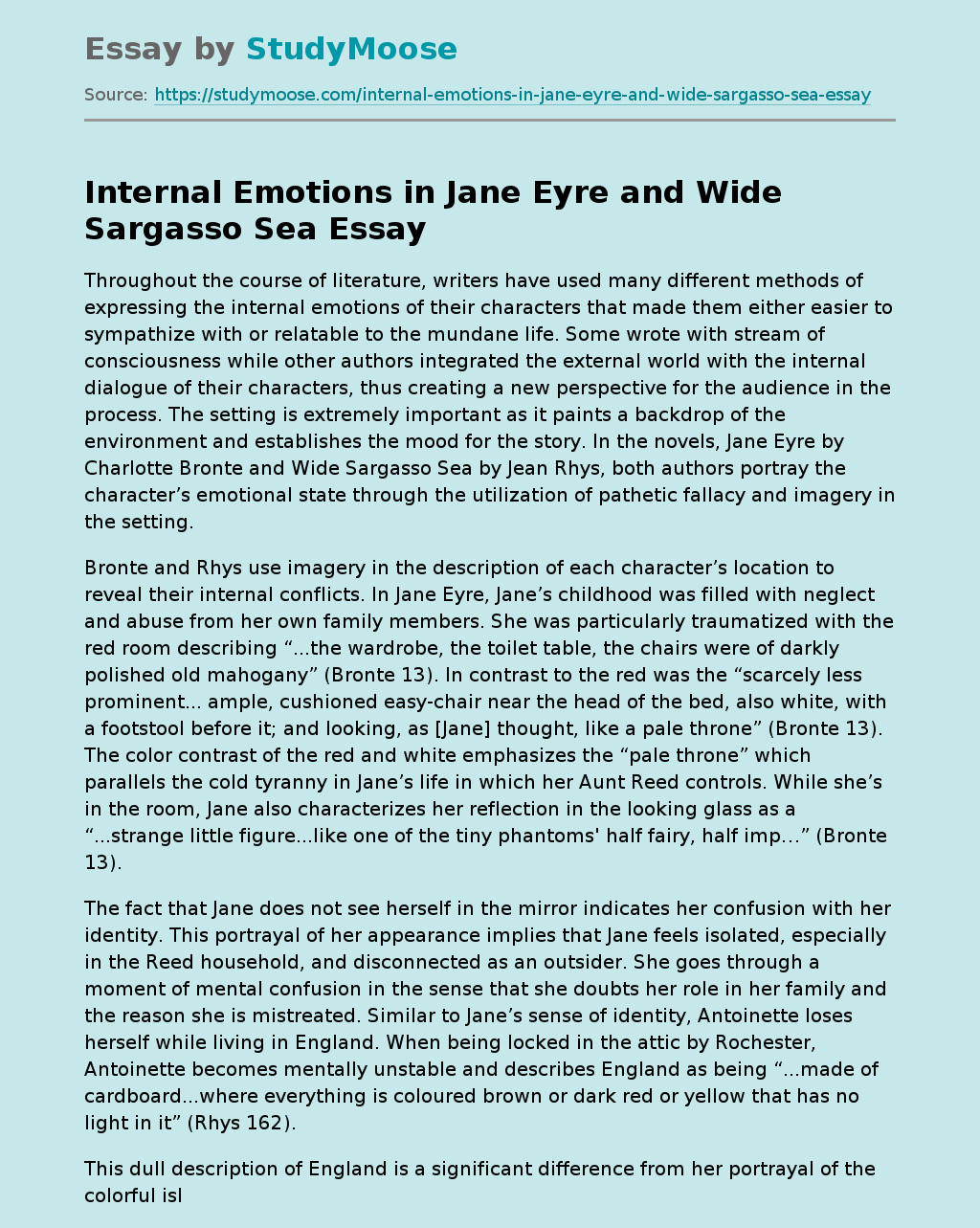