“Emma”, by Jane Austen, is an example of the literary style “bildungsroman”, which is a novel focusing on the self-improvement and knowledge-gaining of a character. Austen’s eponymous heroine Emma Woodhouse must undergo a series of life-altering experiences in order to become more knowledgeable about the world around her, and also gain more understanding of herself. This is done through a series of crisis and hard-hitting aftermaths.

Chapter 16 is the first “traumatic aftermath” which Emma finds herself experiencing. After the shocking ordeal the same evening with Mr.

Don't use plagiarized sources. Get your custom essay on
“ Discuss two chapters in which Emma’s emotions and thoughts are used to engage readers ”
Get custom paper
NEW! smart matching with writer

Elton announcing his being in love with her, Emma sits down to “think and be miserable” while pondering on what has happened, and what will happen next.

The opening paragraph is an expression of Emma’s agitated emotional turmoil. The short phrases broken up with dashes and exclamation marks indicate her disturbed, irrational thought pattern. This engages readers in her activities because we empathise with her in wondering what she can possibly do to resolve the situation.

This chapter can be called Emma’s “Nadir”, the lowest emotional frame of mind she has encountered so far. However, it is clearly a key moment in her bildungsroman enlightenment. For the first time, Emma seems to see things clearly. She has the dawn of realisation that she is not infallible and has made a huge mistake through her own ignorance which has caused trouble not only for herself, but also for Harriet. This drastic awakening fascinates readers because for the first time, Emma is actually considering the feelings of someone else, instead of being preoccupied with her own selfish needs and fancies.

The startling change of character being clearly described enthrals readers, as we have been wanting Emma to learn a valuable lesson ever since she began meddling with Harriet’s way of thinking; and we also know Emma’s character well enough to be dubious about how long this saintly change of outlook will actually last.

The remainder of Emma’s pensive meditations keeps readers engaged because her thought pattern touches individually on every aspect of the current situation. Because we are given such deep insight into Emma’s thought processes and emotions, we connects more strongly with her character and therefore do not lose interest; rather, we become steadily more fascinated by her turbulent flashes of thought. Austen’s third person flow of consciousness in chapter 16 in very effective in keeping readers engaged in Emma’s preoccupations.

Another chapter in which Emma’s thoughts engage readers is chapter 47. A sudden reversal of character between Emma and Harriet results in Emma’s most traumatic “aftermath” in the whole novel. Harriet causes this through her new-found confidence and snobbery, as well as her news of her assumption that she is going to marry Mr. Knightley. Throughout the chapter, Emma’s being belittled and patronised by Harriet displays and ironic humour to engage readers, since Emma is finally receiving the kind of treatment she is usually accustomed to giving out.

After Harriet leaves, we are again presented with a lengthy third person flow of consciousness. Emma finally learns the lesson which she has been requiring all through her education and development: before she can act correctly for others, she must first know herself. The brutal honesty with which Emma realises her many faults and sins draws the readers into her fragile emotional state. She admits that she “had not quite done nothing- for she had done mischief”, and fears that she has brought evil upon herself, upon Harriet, and also becomes upset at the possibility that she has done wrong unto Mr. Knightley.

Emma finally experiences regret and starts to consider the consequences of her actions. The astonishing reform of character captures our interest, and readers cannot help but feel relieved that Emma finally has had her dawn of comprehension. Chapter 47 is also the first chapter in which Emma’s true feelings for Mr. Knightley begin to become clear. This intrigues Austen’s readers because each of her novels results in the heroine’s fairytale happy ending by her marriage to the man whom she is in love with. Throughout “Emma”, readers are given false leads as to Emma’s future husband, after the “experiences” with Mr. Elton and, more recently, with Frank Churchill. Read also Frank Churchill Emma essay

Readers become hopeful that now that Emma has a more mature understanding of love, she will achieve her “reward” with the man she truly loves.

Due to Emma being the key character in the novel, readers need to be able to feel a sense of connection with her in order to want to read more than a few chapters. Austen’s dramatic passages of Emma’s thoughtful streams of consciousness allow readers to feel as though they know her character perfectly. This keeps us engaged throughout the novel so that we do not lose interest in the affairs of Highbury’s population, and also makes “Emma” a book, and a character, which readers will not forget.

Discuss two chapters in which Emma's emotions and thoughts are used to engage readers. (2020, Jun 01). Retrieved from https://studymoose.com/discuss-two-chapters-emmas-emotions-thoughts-used-engage-readers-new-essay 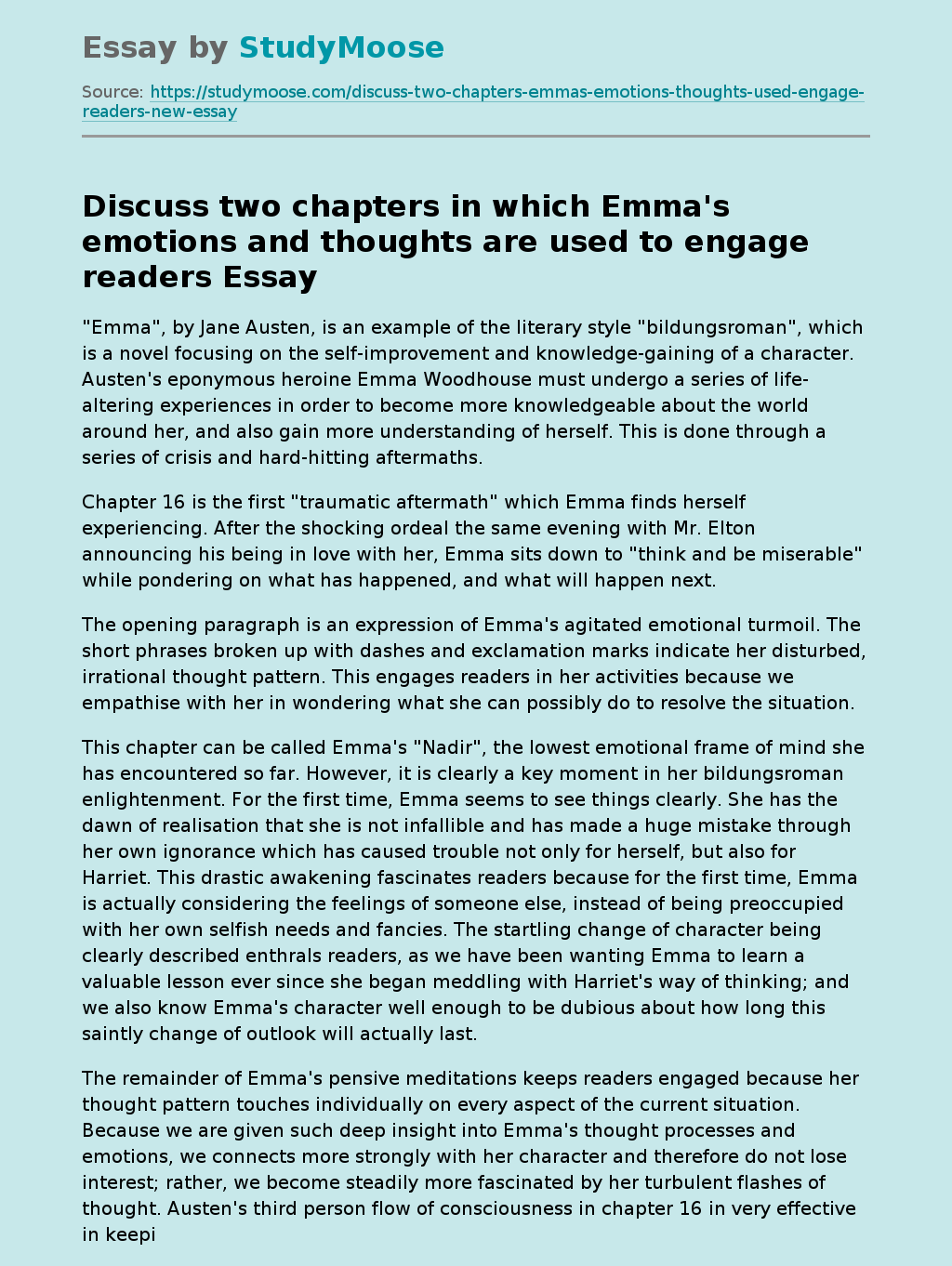