Snobbery in the novel Emma by Jane Austen

Emma is of social hierarchy and is living is a society governed by strict rules to rank and place, she is very much aware of her high status in Highbury. Mr Woodhouse and Mr Knightley, as substantial landowners, are first in prominence. The land they own was inherited by them from their families. This marks them as gentlemen.

High rank in society was dictated more by family history than current wealth, and this is one of Emma’s objections to Mrs Elton as she has self-inflated her own ideas of social status “…She brought no name, no blood, no alliance.

Don't use plagiarized sources. Get your custom essay on
“ Snobbery in the novel Emma by Jane Austen ”
Get custom paper
NEW! smart matching with writer

In fact Emma is very hypocritical in her judgement of others, she sees nothing wrong with Mr Weston marrying a “…portionless governess…” and fiercely defends Mrs Weston when Mrs Elton slights her “…I was rather astonished to find her so very lady-like! But she is really quite the gentlewoman…” She has no objections with Harriet marrying either Mr Elton or Frank Churchill, but reacts with shock to the same level of inequality when it involves Mr Knightley “…Such an elevation on her side! Such a debasement on his!…”

Harriet’s illegitimacy is a social hurdle in the society of that time, however Emma chooses to ignore this purely for her own fancy.

Mr Knightley (wise to Emma supposedly trying to help remove Harriet’s past and gain her a good marriage) points out that it would be difficult for Harriet to marry a gentleman as equality of alliance was of paramount importance, even Mr Elton states “…no doubt, there are men who might not object to – everybody has their level…”

Emma’s inherent snobbery leads to a complete lack of awareness to the needs of those less fortunate than herself, and as Jane Austen presents most of the novel through Emma’s eyes we hear and see little of the poor.

The novel Emma is in fact a book of social satire.

It was important in the society Jane Austen conveys to be married, as once married you would have a higher status, independence, and if you married well you had a good fortune as well as a comfortable life.

The more money you had the higher status you obtained and the more leisure events you were invited to. Leisure events were important in this society has it was a means of meeting new people – possibly even a husband, and a way to show off what you had and how rich you were.

Mr Woodhouse manipulates Emma and others, but in subtle and insidious ways. He is a hypochondriac, subject to all sorts of imagined distresses. He disapproves of Miss Taylor’s marriage because it is going to cause disruption to his household and feels she would have been a great deal happier if she had continued to spent her life as governess at Hartfield. It is clear to all those around that this is not true, but they allow him his opinion because of his age and status.

Mr. Woodhouse knows that Emma will always gratify his whims. Her freedom of choice and movement is severely restricted by her father’s tendency to interfere.

The overwhelming question for Emma and Mr Knightley at the end of the novel having found love together is how will Mr Woodhouse be induced to consent? They have to agree to live in Hartfield to satisfy his needs.

Mrs. Elton is also a manipulator in the novel. She tries to take Jane as the object of her patronage in order to further her own status in society by having a patron. However, Jane makes every attempt to repel the interfering busybody and luckily in the end finds happiness with Frank away from the clutches of Mrs Elton. Read also Frank Churchill and Emma essay

Nearly all the characters in Jane Austen’s Emma can be accused of social snobbery in some form or another with the exception of Mr Knightley and they all manipulate other characters to satisfy their own status and happiness. The characters judge one another on their status rather than their personality and this is snobbery. In fact it didn’t matter who you were but if you had money you could succeed easily in Highbury society.

Snobbery in the novel Emma by Jane Austen. (2020, Jun 02). Retrieved from http://studymoose.com/snobbery-in-the-novel-emma-by-jane-austen-essay 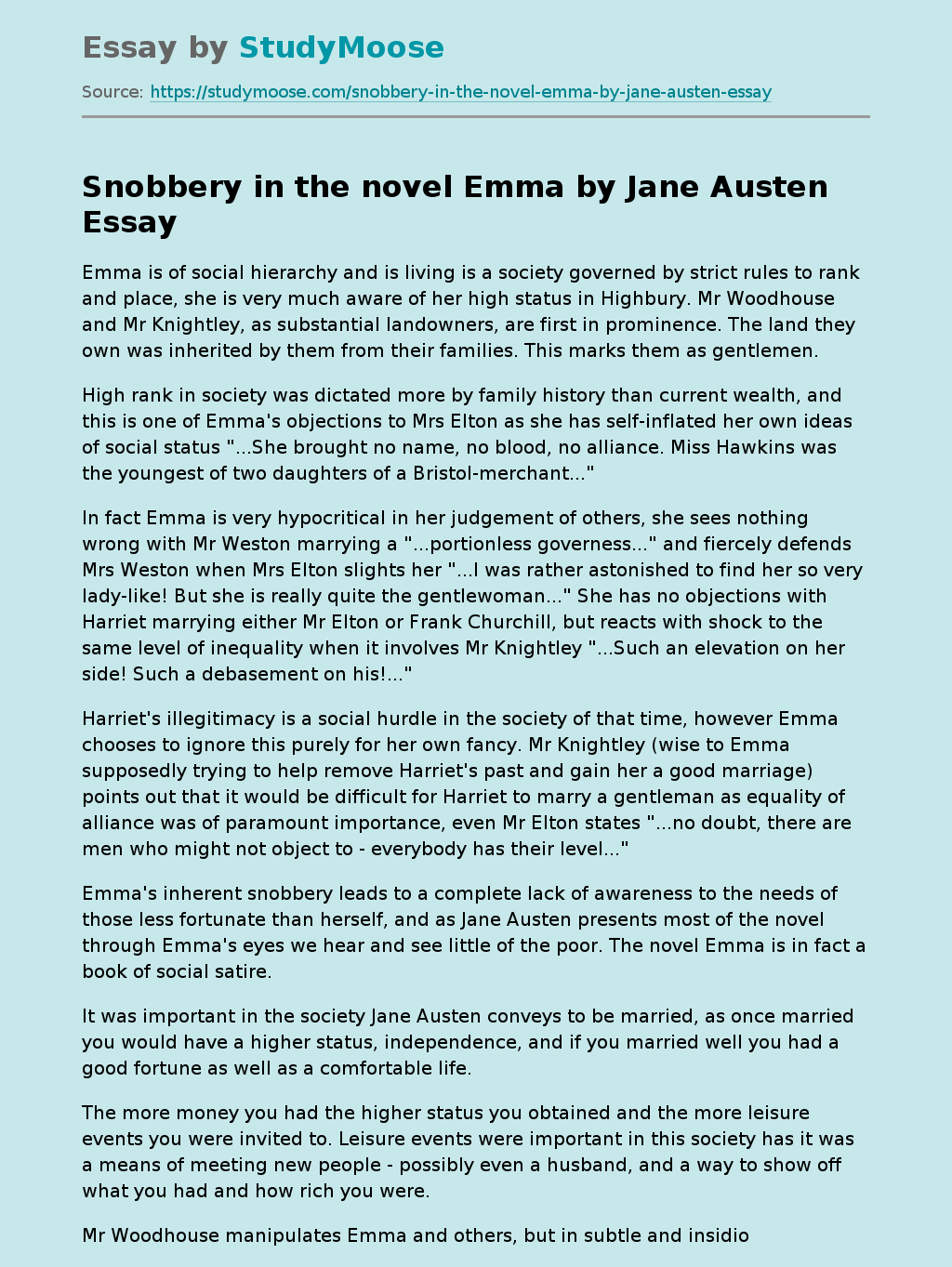