Jane Eyre and Wide Sargasso Sea – A Comparison of Theme

Jane Eyre and Wide Sargasso Sea are both excellent pieces of written work that explore the theme of racial identity and social class. In Jane Eyre, Jane struggles with her identity as a governess for aristocratic children. As a governess, she is expected to behave in the way that aristocratic people do. She was required to act with class and sophistication. At the same time, she was still considered a paid employee and treated as such. In addition, Jane had no money or power to change her situation.

Don't use plagiarized sources. Get your custom essay on
“ Jane Eyre and Wide Sargasso Sea – A Comparison of Theme ”
Get custom paper
NEW! smart matching with writer

Jane struggled with the issue of social class because she was expected to act as if she was a member of the upper class while being treated as a member of the lower class. “Half of them detestable and the rest ridiculous, and all incubi” (Chapter 17).

Racial identity plays a role in Wide Sargasso Sea that is similar to the struggle that Jane experienced in Jane Eyre. Antoinette struggles in this book because she is an outcast in Jamaica.

One reason is because she wears different fashions than that of the other women who live in Jamaica. Antoinette isn’t a part of either the white group or the black group and hears others call her a “white cockroach” as well as tell her that she isn’t the same as “real white people” (Part 1, Section 1).

In addition, Antoinette and her mother do not treat black servants badly as many of the other islanders do. They realize how much the black servants help them in their daily lives and respect them.

This further highlights the differences between Antoinette and the other people who live on the island and makes it even more difficult for Antoinette to assimilate herself into either the white culture or the black culture.

The desire to be loved and accepted is another major theme throughout both Jane Eyre and Wide Sargasso Sea. In Jane Eyre, Jane longs for acceptance and the feeling of belonging. She also wishes for romantic love to come her way. “To gain some real affection from you, or Miss Temple, or any other whom I truly love, I would willingly submit to have the bone of my arm broken, or to let a bull toss me, or to stand behind a kicking horse, and let it dash its hoof at my chest” (Chapter 8).

This quote shows the desperation that Jane felt in her desire to be accepted and loved. As a governess, she was responsible for the well being of aristocratic children and also required to behave in an aristocratic fashion. However, she was still treated like a servant rather than valued for her contribution to the lives of the children. She desires romantic love as well but realizes that a relationship with Rochester will only result in her becoming a mistress rather than an equal partner.

In Wide Sargasso Sea Antoinette also wishes to be loved and accepted the way she is. She is a white Creole who grew up in a Caribbean society and she doesn’t fit in to either the white culture or the black culture. This is why she feels very isolated and unloved. This doesn’t mean she doesn’t wish to be a part of some group. She struggles to fit in because of her fashion sense as well as her strong personality. She struggles further because of her racial background. She is white but she is a white Creole rather than a white European and this further emphasizes the differences she feels.

Both novels explore the themes of race and class along with the strong desire to be accepted regardless. Jane and Antoinette both portray women desperate to overcome their social or racial identity in order to find a place in society where they fit in. They both struggle with their current situations and wish to make some changes. Jane wants to be respected for her work as a governess and loved at the same time.

Antoinette wants to be loved and respected regardless of her racial background. These are powerful themes that show readers how natural the basic human need of acceptance and love really is and how far and to what lengths people will go to attain it. Finally, both women work very hard to overcome the life experiences that leave them feeling entrapped in order to find true happiness. 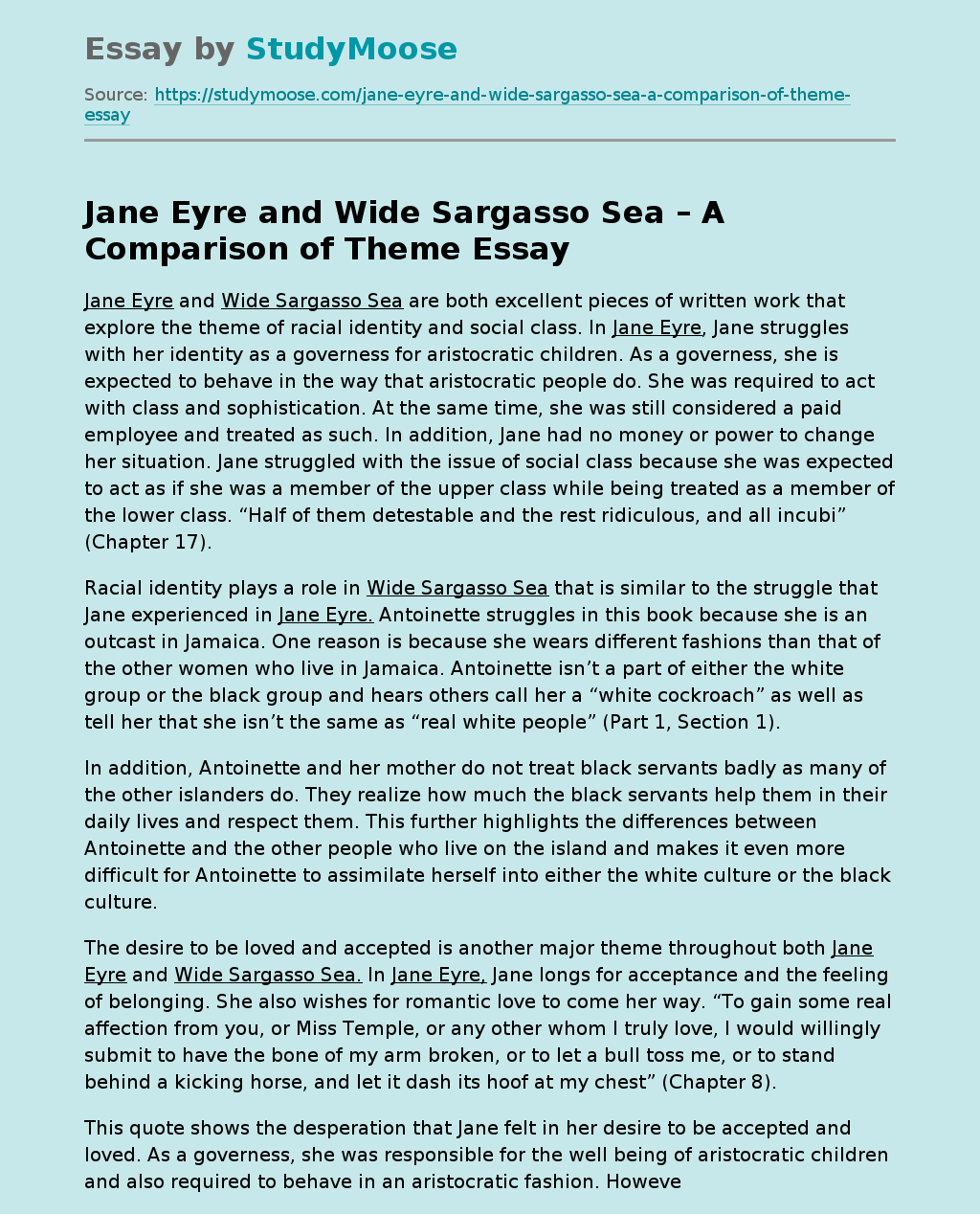